I watched Fury (Saving Private Ryan with Tanks) starring Brad Pitt as something of a howling sh*t tank commander at the weekend and while the CFG special effects were great and the tension sky-high the plotline was distinctly iffy, opines ‘Voice’s Dave Watt. 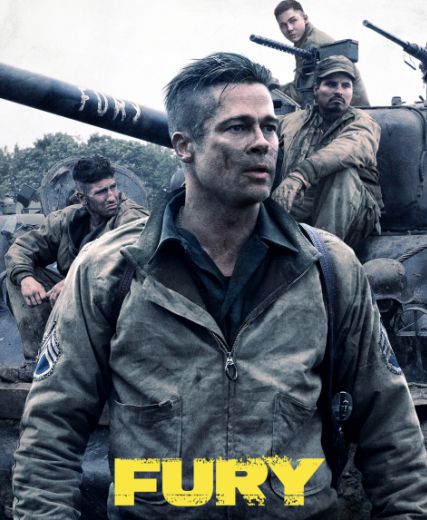 The Better Educated Young White Middle Class Hero Who Usually Survives in a Hollywood Movie – like Corporal Upham in ‘Saving Private Ryan’  or Corporal Sledge in ‘Pacific’ he is the team intellectual who, in this case, is thrown into a tank crew having been a clerk for eight weeks.

He has never been in a tank before and he is the assistant driver?

There are no expendable ex-elementary school infantrymen who would be glad of an internal transfer?

Come on, if you’re that determined to waste a qualified clerk at least put him in the infantry where he can step on a Schu-mine and clear the way for a real infantryman. Play the game, HR.

The Crew – You simply don’t have to behave like Bluto to be part of a Tank crew. It’s not necessary to be eight foot high and covered in red hair with attitude – you’re in a metal tank with a 3″ thick armour and a 76mm gun for God’s sake!

You might as well be a shy, unassuming, five foot three trainee librarian with an interest in macrame. Perhaps the screenwriter found a couple of old Sven Hassel paperbacks holding up a table leg somewhere. Who knows.

I don’t know if tank crews in the Yank army really behaved in this posturing macho fashion towards new crewmen but British ones certainly didn’t if WWII tank crew like celebrated author Ken Tout and Michael Green (author of the Coarse Rugby books) are anything to go by.

Needless to say, following the approved Stephen Spielberg formula, as the film goes on the crew become a lot nicer and border on the maudlin and the downright mawkish if not schmaltzy by the end.

Bluto encounters a Tiger tank  – Even at this stage of the war the German tankies were doing a minimum twenty week training course and the cardinal rule which would have been drummed into them every day since 1940 would be –  ‘You do not fire when you are moving’.

1) The Tiger – opens fire and promptly brews up Tank #2

Brad Pitt orders the rest to put smoke down in front of the Tiger.

2) Bearing in mind the Tiger has the Shermans considerably outranged it has three choices :

The mission – the tank squadron is ordered to guard a crossroads with no infantry, artillery or air support. Unusual. Very unusual as it’s April 1945 and by this point the Allies have air and artillery support coming out of their ears. However, by the time the tanks get to the crossroads there is, courtesy of the Tiger, only Pitt’s tank left which promptly runs on to a solitary mine.

Finding that they are about to be attacked by a battalion of SS infantry (apparently SS infantry Uruk-Hai as they didn’t seem to mind casualties one little bit) and only having the disabled tank the crew sensibly decide to vote with their feet before Brad shames them into staying.

Bugger the fact that it’s April 1945, what’s left of the German army is totally screwed in the west, the Soviets are in the suburbs of Berlin and this will make very little difference to the outcome of the war anyway. Brad does his High Noon shtick and the crew actually decide to stay, the idiots.

I remember once being in an office and (being the only ex-serviceman in the place) a guy had seen some film that involved some John Wayne type figure asking for volunteers for the heroic rearguard and him asking me if that was the case in real life and myself bursting into rather coarse laughter with the equally coarse words “F**k me, they wouldn’t get many fu**ing volunteers”, and pointing out that your unit would simply detailed as rearguard by the commanding general and your views on the matter were not generally canvassed.

Hollywood has a lot to answer for.

Anyway the SS Uruk-Hai repeatedly charge up to the disabled tank and are shot down in droves but eventually they overrun it and almost everyone dies heroically but quite picturesquely considering the mayhem which has preceded it. The exception is the young intellectual who presumably goes on to live a full and happy life teaching Ethics at Illinois University.

For the benefit of those who may want to climb on their high horse and say I’m dissing WW2 tank crews – it’s okay, it’s only a film.

However,  I sat inside various Chieftains courtesy of Four Guards Armoured in my army days and thanked various dieties that I was in the Signals. You can’t see a bloody thing from inside a tank and if you are a tankie you’re always convinced there’s some bugger farting around under your armpit with an RPG-7. Not good.

For further reading – see a surprisingly good article in the Telegraph.