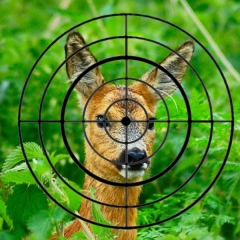 Voice’s Dave Watt poses the question – “When We Talk About ‘Culling’ Deer, What Do We Actually Mean?”

What this means is that a bullet and a deer’s body are going to meet at somewhere in between 600 and 3000 feet a second.  (These are the figures for a hand gun and an assault rifle respectively).

So what does this mean for the unfortunate deer?

I obviously don’t have input from deer that have been shot previously but as I’m a) ex-army, b) have studied the subject of warfare quite a bit and c) have spoken to several doctors about it, I have a fair idea of the horrors  which occur when a body and a bullet meet at a couple of thousand feet a second.

Richard Holmes in his book ‘The Firing Line’ points out that almost all wounds become painful when the initial shock wears off and some are utterly agonising from the start. “Wounded men scream, either because of the pain itself, or in sheer panic and terror”. Lt. Edwin Campion of Royal Warwicks described the noise coming from the darkness at Passchaendale:

“On all sides  came the groans and wails of the wounded men: faint, long, sobbing moans of agony and despairing shrieks.”

Michael Herr’s description of a wounded man shot and entangled in barbed wire is equally moving:

“We heard then what sounded at first like a little girl crying”, he reported,

“a subdued delicate wailing , and as we listened it became louder and more intense, taking on pain as it grew until it became a full , piercing shriek.”

The people I’m describing here undergoing these agonies are not freaks of nature, they are people like you and me. Hit by a bullet as they were, you and I and poor old Bambi up in Tullos would cry, writhe and shriek in undignified pain just as they did.  Luckily for you and me this scenario’s pretty unlikely but I’m not so sure about Bambi.

Sounds fun, doesn’t it? I bet old Bambi and his pals can hardly wait.

As a medical friend of mine pointed out, the dreadful thing about mammals is our sensitivity to pain and the equally dreadful fact that the organisms of dying mammals cling on to life with a ghastly pertinacity.

Additionally, unlike all that nonsense that Hollywood has been spouting over the years, the agony from a wound is in almost exact proportion to the severity of the wound.

Another grisly little aside to that is that unmarried men dying in the extremes of major wound agonies tend to cry on their mothers and married men on their wives. Isn’t that a lovely little statistic to take away and keep in some dark little corner of your mind? Perhaps as Bambi lies twitching in agony on the ground with his bowels loosened (yes, that happens too) he might cough out , with the spray of arterial blood, a choked cry for his ma or the cute little doe he’s been mating with. Who knows?

Even in the unlikely event that the poor old Bambi is fortunate enough to be hit with a head shot (which, despite Hollywood, are frequently not immediately fatal either) this is still hardly an enjoyable experience as Charles Carrington at the Somme had the disconcerting experience of speaking to a corporal as the man was hit by a rifle bullet:

“He was alive and then he was dying or dead, and there was nothing human left about him. He fell with a neat round hole in his forehead and the back of his head blown out.”

While Pte Le Brun of the Canadian Army referred to a comrade being killed beside him,

“His blood and brains, pieces of skull and lumps of burning hair spattered over the front of my greatcoat and gasmask”.

Sounds fun, doesn’t it? I bet old Bambi and his pals can hardly wait.

Finally, General Sir John Hackett writing an article on World War II films for the Sunday Times pointed out the inaccuracy of the depiction of casualties in  Hollywood films where:

“If men are shot ….they fall down like children in a game, to lie motionless. The most harrowing thing in real battles is that  usually don’t lie still; only the lucky ones die outright.”