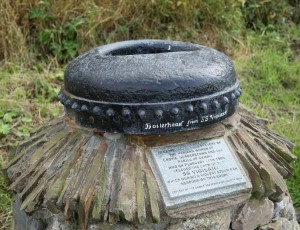 In Crovie, the fisher folk were quite used to the effects of the sea. They had, for generations, lived with the seasons, and felt that they knew how to survive the furies of the winter storms. These were hardy folk indeed.
In February 1906 they had risked life and limb to rescue the crew of the SS Vigilant when, after engine failure it was driven ashore onto the Rotten Beach just down from the village.

A joint effort with the folk of nearby Gardenstown enabled the rescue of all six crew, despite the terrible conditions during a severe winter storm.

The boiler from the stricken vessel lay in Crovie Bay as a landmark for over 90 years, before being removed by the local council after a storm washed it onto the shore.

There is a memorial to the event on the coastal path between Crovie and Gardenstown.

Then there were those German spies.

During April 1941, two armed men landed at Crovie pier from a rubber dinghy. It was a time of distrust. Road signs in the North East had been removed and the Emergency Coastal Defences were in place. General Ironside’s Innes Links Coastal Battery was yet to fire a shot in anger, but the general mood was fear of invasion and distrust of foreigners.

It was just before 6 a.m. on April 8th 1941, and three hours earlier the two men had been dropped a few miles offshore by a German flying boat. When climbing into their rubber dinghy, they had lost their means of transport when the Luftwaffe aircrew panicked and threw their two bicycles into the North Sea, where no doubt they lie to this day.

As they watched the seaplane take off for the return trip to Norway, they must have wondered what had possessed them to volunteer as German spies and what fate would await them when they made landfall in the North East of Scotland.

The two men were in fact Norwegians who had been recruited by the German security services to report on the Moray coastal defences. It’s a well known story: they rowed ashore to Crovie pier and asked the man at number 27 how to get to Banff by bus.

It was April 1941. Very few locals spoke a foreign language despite the influx of Polish personnel into the Moray area. 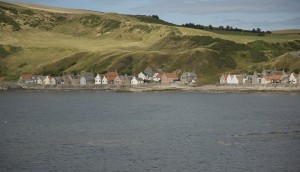 The coastal village of Crovie, Moray.

Mr Reid at number 27 seemingly dialled 999 and reported the incident to the Banff Constabulary.

The rest is history.

Used as double agents, the two Norwegians fooled their German masters for a few months before being allowed, in one case, to join the Norwegian Army and in the case of the second agent, to live out the rest of the war in an internment camp.

They were nicknamed Mutt and Jeff after two cartoon characters of the time, whom they were thought to resemble.

Mutt and Jeff? Cockney rhyming slang for deaf perhaps, or a reference to a then popular American newspaper comic strip created by cartoonist Bud Fisher in 1907 about “two mismatched tinhorns.”

Both were lovable losers however, and the good folk of Crovie still remember them with relish.

Crovie is one of only two places in the world to be blessed with a North Pole.

Mind you, the Crovie North Pole is easier to reach. To get there simply walk to the far end of the village, to the drying green past the Mission Hall. A green metal clothes pole awaits, and visitors are advised that “if you don’t walk around the North Pole, then you haven’t done Crovie.”

6 Responses to “Crovie: The North Pole?”