In part two of his article Duncan Harley looks at some of the issues surrounding the episode in which the people of the beleaguered city of Aberdeen literally ate the evidence while officials from MAFF (Ministry of Agriculture, Fisheries and Food) seemingly connived to sell the remaining stocks of corned beef abroad. 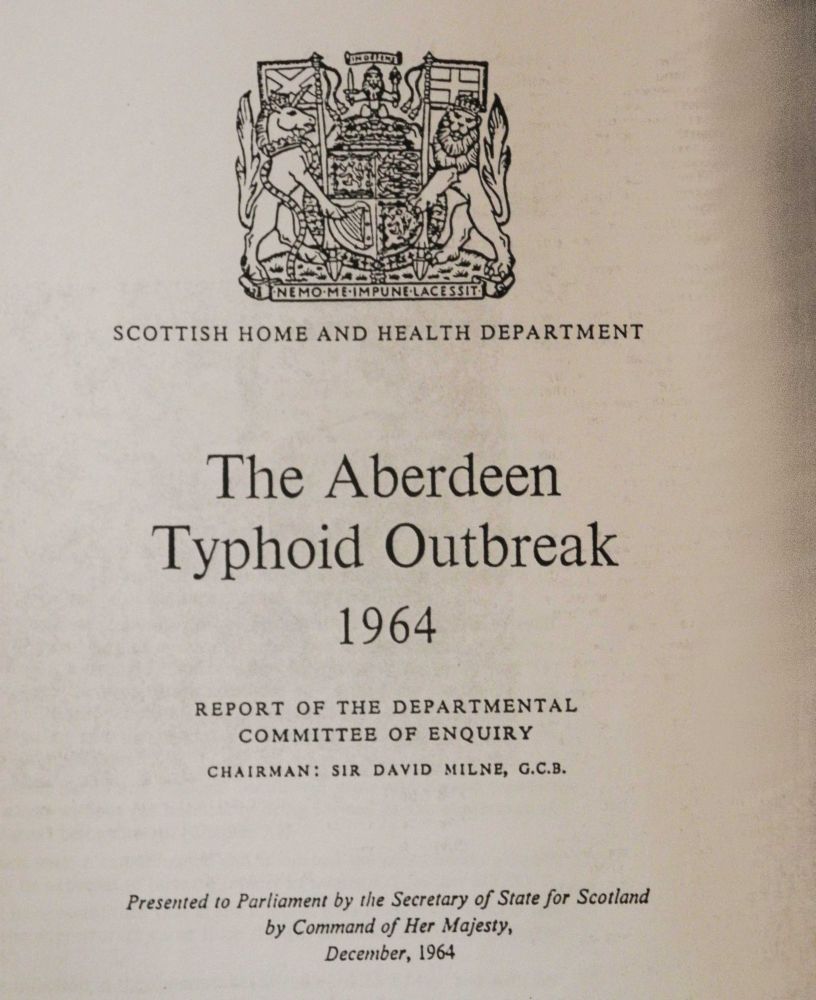 Initially the press were largely unaware of the 1964 Aberdeen typhoid outbreak but as the numbers of hospital admissions grew it became obvious that an epidemic was in progress.

Headlines proclaimed a ‘City under siege’ and the situation was not helped by the proclamation of the then Medical Officer of Health, Dr MacQueen:

“We’re not a leper colony! End this hysteria”.

His subsequent advice to both Aberdonians and holidaymakers alike to avoid swimming or paddling in the sea led to a local paper headlining on ‘Beach Bombshell’ and pretty effectively killed off any short term prospect of the return of the lucrative ‘Glasgow holiday trade’ to the beach seafront area.

Described by a colleague as ‘a bulldog with the hide of a rhinoceros’ Dr MacQueen’s strategy of innovative traditionalism has been seen by some as an attempt to protect and extend his department’s services.

He was judged by some to have made excessive use of the media and to have turned the outbreak into an event approaching a national crisis. Indeed the Milne Report into the handling and course of the epidemic commented that:

By the end of May 1964 the MOH was advising the national press that Aberdeen was now ‘a beleaguered city’ and suggesting that Aberdonians should not venture outside the city boundaries. Outsiders should ‘stay away’ he said.

Public baths, youth clubs and sports clubs closed down for the duration and even the Police Pipe Band, who would later be on hand to play for the Typhoid Queen had to cancel an appearance in Renfrew.

Even the normally sedate Sunday Times newspaper got in on the act with an exclusive which claimed that the Granite City’s image as a clean modern city was erroneous. Seemingly Aberdeen was in reality a city suffering chronic housing problems and poor sanitation. Such histrionic rubbish only served to deepen the crisis.

The news of the epidemic was reported around the globe with one Spanish periodical reporting that the streets of Aberdeen were littered with unburied rotting corpses waiting to be thrown into the sea.

Although the tourist trade was first to suffer with hotels being particularly hard hit there were significant effects felt all over the North East. Caravan sites and hotels began refusing bookings from Aberdonians, butchery and fresh produce firms saw their customers sourcing goods elsewhere rather than risk buying from a city under siege. 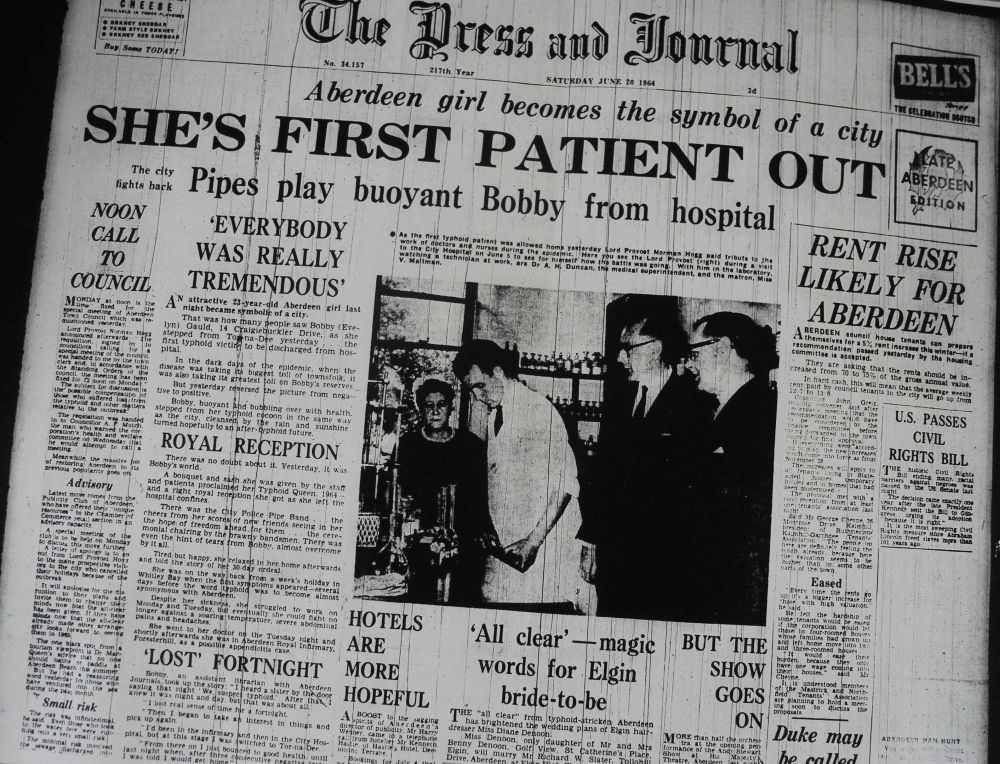 Alexander’s Bus Company reported a marked decrease in ticket sales with some services running virtually empty and at one stage panic ensued when a local Aberdeen butcher’s Thistle Street shop was wrongly identified as being the source of the outbreak.

Paranoia reached a peak when the catch of an Aberdeen fishing boat was seized after the skipper became ill with suspected typhoid. The matter was discussed at the daily crisis meeting in the council offices.

After some deliberation, during which it was pointed out that ‘unless the crew are in the habit of defecating in the hold, there is no scientific reason to suppose that the fish pose a health risk’, the catch was duly released for sale and public consumption.

For patients and relatives the experience was more serious however.

Placed in isolation wards and uncertain as to when or even if they would be allowed home, patients had to endure weeks of treatment separated from friends and family. Stories of visitors communicating with relatives through locked glass windows are common and as one Old Meldrum man recalls:

“I couldn’t understand why my father and mother weren’t allowed at my bedside, later when I was allowed up we would talk at the ward window, which was of course closed. This went on in my case for about 5 weeks. Luckily I have not had any long lasting effects from the illness but it must have been really hard for the younger children.”

Many others have similar stories.

Compared to the human cost of the Lanarkshire E. coli outbreak – twenty one deaths, Aberdeen’s typhoid epidemic’s total of three deaths pales into insignificance, however the after effects rumbled on for years.

Businesses in some cases never recovered and jobs were lost.

In the wake of the outbreak there were enquiries at both local and national level, the Milne Enquiry being perhaps the most influential. In summary the Milne Report squarely places the source of the infection on infected corn beef imported from the Rosario factory in the Argentine and further stated that there was no evidence that the infected meat had come from government stockpiles.

The fact that the UK government stockpiles of corned beef at the time contained further quantities of infected Rosario cans was seemingly not an issue for Milne and his report concluded that:

“where canned meats are produced under satisfactory hygienic conditions – they will be free from any health hazard.”

It took almost 10 years for the existing emergency corned beef stocks in UK government run warehouses to be disposed of. The main method of disposal was the exporting the now suspect food to other markets abroad with a proviso that the meat should be re-processed.

Not only had the citizens of Aberdeen eaten the evidence from the initial source of the outbreak but over the years subsequent to the Milne Committee’s deliberation, the unsuspecting citizens of many other countries consumed the evidence which remained.

As a postscript, Michael Noble MP then Secretary of State for Scotland announced in September 1964 that in the light of the Aberdeen Typhoid Epidemic he would ensure that ‘additional funding’ would be made available to any local authority in Scotland ‘wishing to provide hand washing facilities within public conveniences’.  He urged that councils should take up this generous offer before the end of the financial year.

Aberdonians were of course by this time already in the habit of washing their hands at every available opportunity despite the comment by Buff Hardie and his mates that:

“we never washed wir hands unless we did the lavvie first.”