Aberdeen Voice  has learned that the Scottish Information Commissioner has upheld Voice reporter Suzanne Kelly’s Freedom of Information request with regard to land and property sold by Aberdeen City Council to Stewart Milne and associated companies. 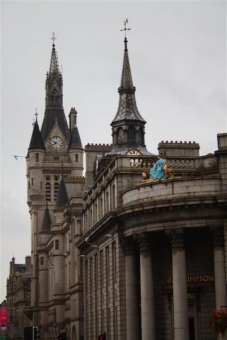 Less than a week having passed since Stewart Milne’s appeal to the Supreme Court failed, the Scottish Information Commissioner has decided that the Council must provide Kelly with information on land transactions between Aberdeen City and Stewart Milne companies.

The Supreme Court had been asked to review the details of a land purchase Milne Group made from Aberdeen City Council. The Supreme Court found that Milne must pay the City £1.7 million over the land deal.

The cost of the legal action is at this point unknown.

Kelly had followed the case, and had heard from several sources that there may have been other deals regarding the property developer and the City.

In a Freedom of Information Request made to the City, Kelly asked for a list of property sold to Milne and/or associated companies and the selling price, as well as a list of contracts the Milne companies had won from Aberdeen (there are several companies connected to Stewart Milne). Kelly wanted to analyse the contracts won and land purchased. The City initially refused her request.

The City is considering a number of budget and service cuts, and this spurred Kelly on. Kelly states.

“If the city is awarding contracts based even in part on low bids, then I question the wisdom and prudence of selling land at a fraction of its potential market value to a successful bidder. The City has a massive property portfolio, and if must keep detailed and accurate records of its transactions. In light of the Supreme Court decision last week, the decision from the Information Commissioner is extremely timely and most welcome. I look forward to receiving the information I have sought for so many months.”

Milne is also a director of Aberdeen Football Club. It is slated to sell its existing Pittodrie Stadium ( the UK’s first all-seater stadium ) and use the proceeds to build a stadium in greenbelt land near Loirston Loch. Planning permission was hotly contested, with local community councils objecting to the plans. The area is home to a variety of wildlife. The club’s income is thought to be in steady decline, as attendances have fallen and the team struggle to climb the league.

“I shall contact Aberdeen Council if I have not heard from them shortly, and as soon as the information is made available to me, I will report back. The Commissioner agrees that the public have a right to have the information I have fought long and hard to obtain.”