Voice’s Suzanne Kelly tells of her attempts to  use Freedom Of Information (FOI) Legislation to find out exactly what property the City of Aberdeen has sold to Stewart Milne/ Stewart Milne companies. 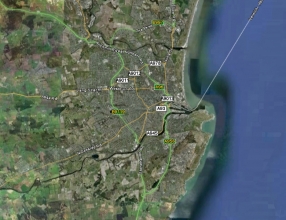 Stewart Milne Construction and its related companies certainly seem to own a fair amount of land in Aberdeen and surrounding areas.

I formally made a Freedom of Information request to the City to find out what public properties were sold by the Council to Milne-related companies.

After a nine week wait for a reply to the original FOI request submitted by e-mail on 9 December 2010, the City declined to supply any information.   The City information office sent two documents explaining the rationale for declining the request; the reasons given in these documents can be summarised as follows:-

(   Copies of response letters can be viewed below. )

The public should have the right to know how its assets, in this case land, are disposed of.  It must be remembered that  the City and Mr Milne have recently been in court over one of these deals. It appears that land in the west of the city was sold to a Milne company for less than market value,  and that there was an agreement that any sale profits would be shared with the City. After legal action on the Council’s part to recover some of the perceived profit, it came out that Milne sold land from one branch of his empire to another, and claimed no share was therefore due to the Council.

Oddly, the courts are thus far not sharing Milne’s opinion. However, Milne is reportedly taking the City, and therefore the taxpayer, back to court to appeal this latest judgment:  this is why it is imperative that we are told what else he or his companies bought from the City, and what the sale prices and actual values were.

What exactly lies behind Aberdeen’s lack of transparency?

The City disagrees with this assessment, so an appeal will be lodged to its Information Officer over the refusal to answer the FOI request.   The City also seems to have confused its dates somewhat.

The official letters denying my information request refer to the request date as 22 January. Is this inefficiency, or a deliberate attempt to obscure the original 9 December e-mail request date?

The City asked me to clarify my request on 23rd December, which I did the same day.      It is most definitely relevant to the citizens of cash-strapped Aberdeen to know what kind of deals have been done.  Aberdeen citizens are facing millions of pounds’ worth of services cuts; local schools are closing, and children and people with special needs are being told to expect yet more cuts.

If the City is continuing to sell off assets at less than market value (despite Audit Scotland’s recent criticism), then something is greatly amiss.   The facts are these – I first sent an e-mail on 9 December asking for information as follows:-

“I have tried unsuccessfully to find the following using your website – please provide it to me under the provisions of the Freedom of Information Act, many thanks.

1.  List of property (including but not limited to land, buildings, building services, material goods, etc.) Aberdeen City sold to the Stewart Milne Group, Stewart Milne Homes and/or any associated companies, and/or directly to Mr Stewart Milne. List to show property name/description, date of sale, sale price, minutes/reports of the City Council approving/recommending the sale, and if available the market value at time of sale.

2.  List of property or services (including but not limited to land, buildings, building services, material goods, etc.), the Stewart Milne Group, Stewart Milne Homes and/or any associated companies, and/or directly to Mr Stewart Milne sold, managed or built for Aberdeen City Council. List to show property name/description, date of sale, price, reports/minutes of the City Council recommending the purchase, and if available the market value at time of sale.If any aspect of this request is not clear, then please contact me directly for clarification.” 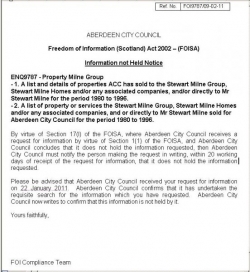 The Council responded by email on 23 December, asking what I meant by Stewart Milne companies, and what time frame I had in mind (which may indicate the sales cover a long period of time).

When I received the request for clarification, I immediately visited the Companies House website, and immediately replied with a list of near a dozen entities bearing the Stewart Milne name which are registered in Scotland. 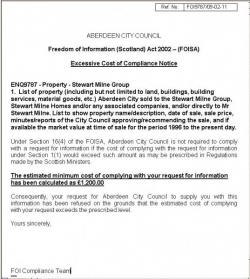 This prompted a next-day reply which was a refusal to comply.   The Freedom of Information Act is meant to give all citizens access to data held by elected officials and public bodies.

In cases where disclosure of requested information would be too costly or would prove a serious breach of security or confidentiality, or would damage fiscal relationships, information may be withheld.

If the requestor is not satisfied with the response received, they have access to the non-partisan Scottish Information Officer, who can order disclosure of information. 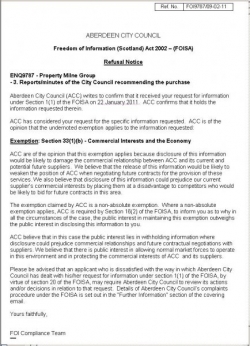 What exactly lies behind Aberdeen’s lack of transparency?   What ‘supplier relationships’ are under threat if the transactions are revealed?

How can it cost £1200 to supply a list of property sold and Council Committee Minutes approving such sales, keeping in mind most Minutes are already on the City’s intranet site?

Who has been involved in the transactions and the decisions regarding my request?