Students have opted to end their nine day occupation of Aberdeen University offices. With thanks to Aberdeen Defend Education Campaign. 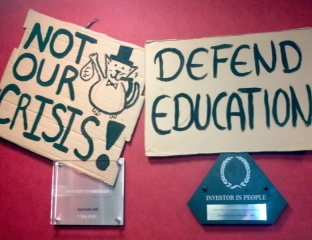 Around 50 students occupied Aberdeen University offices on Regent walk from Monday 28th November in protest against education cuts.
The aim of the protest, organised through Aberdeen Defend Education Campaign, was to demand that university management resist cuts to staff jobs, to decline any bonus offers, and to make a stand against the Government’s economic policies.

“We have taken the decision to end our occupation of the University Offices on Regent Walk, and we do so in good spirits and having achieved a lot.

“Over and above the concrete concessions we have been given by management, the occupied space served as a venue for people to genuinely challenge the direction of Higher Education at a much more fundamental level. Through dozens of lectures, talks and workshops we have aimed to foster a culture of debate and critical thought. As well as this, we have also firmly put issues such as pensions, college funding and bonuses on the agenda and the importance of this shouldn’t be understated.

“Management have committed to raising concerns around reforms to the USS pension scheme. They have also committed to breaking down the culture of secrecy and unaccountability around bonuses and senior staff remuneration. Lastly, they have made clear their belief that the state should be and should remain the primary funder of education and that the enormous cuts we have seen to colleges have been unfair.

“We are clear that there is still much to be done, but the concessions we have gained from management and the bridges we have built with staff and trade unions put us in an excellent position to continue this fight in the new term.“