I spent a day in Elgin this week researching the news from 1964 at the town’s local history resource centre, reports Duncan Harley. Quite a gem. Full of information from the present day to goodness knows when in the past. Run by enthusiastic and helpful staff, it is a Scottish national treasure! 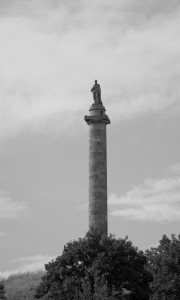 Elgin is a grand town full of rich history. William Joyce, better known as Lord Haw Haw went to speak there in the 1930s, in an inspired effort to recruit for the Blackshirts.

The sensible folk of the town heckled him, but he chose to tell the assembled crowd of around seventeen that he appreciated their support and knew that they were for his cause. He was, of course, later hanged for treason despite being an Irish-American.

Elgin also has a ruined cathedral and some very fine statuary, including a monument on the hill just west of the town centre, comprising a Doric column topped by a statue which might just be mistaken for a second Nelson’s Column.

Nothing could be further from the truth however. It is in fact a monument to one George Gordon, who in 1794 raised the famous Gordon Highlanders.

The Gordon regiment joined an army under the command of General Moore in the Netherlands campaign, and fought at the Battle of Bergen in 1799 in which Gordon was severely wounded. He was presented with the Grand Cross of the Bath in 1820.

In 1964 there was, of course, the grand opening of the Forth Road Bridge by the Queen and the death of, thankfully, a very few unfortunate folk in the NE from typhoid, so in general life went on. 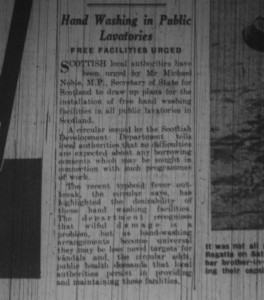 Many were surprised that after the event – that is the typhoid epidemic, not the opening of that road bridge – when Michael Noble MP and then Secretary of State for Scotland, chose to set aside funds to allow local authorities in Scotland to provide ‘hand washing facilities in public lavatories’.

Vivian Stanshall famously drew attention to the issue on an early 1970s John Peel Show when, in an episode of Rawlinson’s End, he wrote a script which read in part,

OLD SCROTUM: Arr, no thank’ee ma’am, I already did that up against a tree afore I came in ‘ere.

Stanshall was found dead on 6 March 1995, after a fire broke out at his Muswell Hill flat. In 2001 Jeremy Pascall and Stephen Fry produced a documentary about him for BBC Radio Four.

Vivian’s full sketch can be read at: http://www.vivarchive.org.uk/images2/Rawlinson-End.pdf