With thanks to John Robins, Animal Concern. 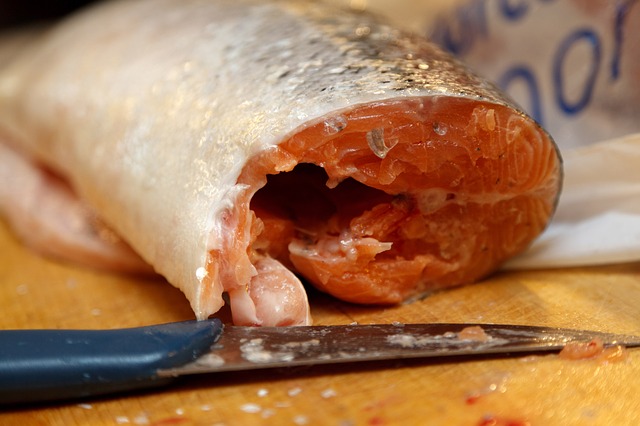 Following another mass escape of farmed salmon into the wild the Scottish Government has been asked to ban marine fin fish farms and move all production to on-shore enclosed pond and caged systems.

Such systems pump in seawater which is filtered and returned clean into the natural environment.

In on-shore salmon farming fish welfare is raised and maintained, sea lice problems are eliminated and escaped fish cannot enter the marine environment where they can introduce disease and genetic damage to wild salmon stocks. Land based salmon farmers have no excuse to shoot and kill seals.

“Increasingly windy and stormy winters greatly raise the risk of floating factory fish farms being breached and releasing vast numbers of genetically inferior and perhaps diseased fish into the wild. Escapees cause havoc within wild salmon stocks. The only way to protect the marine environment and protect the welfare of farmed salmon is to get this industry out of our seas and into controlled on-shore facilities.

Below is a copy of our request to the Scottish Government.

I write concerning the news that recent storms have caused the escape of 154,569 fish from a Meridian Salmon Group farm at Ness of Copister in Shetland. The company has also stated that they were unable to reach the farm for a period of two weeks because of the bad weather. Just over two years ago Meridian lost 300,000 salmon in a similar incident at another of its farms in Shetland.

These incidents highlight the very detrimental impact salmon farming inflicts on the marine ecosystem. They also raise serious questions about the welfare of salmon in floating factory fish farms.

Many of the salmon involved in this latest incident will have died from starvation, stress, physical trauma and entanglement in the mesh of the cage nets. Others will starve due to being unfit for life in the wild. Tens of thousands will however survive and compete with wild salmon for food.

The surviving escapees will migrate to rivers and may interbreed with wild salmon thus degrading the wild salmon gene pool.  Many salmon farms rely on medication to control or suppress disease and there is a very real risk of escaped fish transferring disease to wild salmon.

As has been seen over the last few years we are experiencing new patterns of weather including, due to movements in the jet stream, far stronger, more prolonged and more frequent winter storms. Gusts of hurricane force winds are no longer a once in twenty year occurrence but are being recorded several times a year.

The only way to maintain the welfare of farmed salmon and protect the marine ecosystem from the damage caused by mass escapes of wild salmon is to move salmon farming onshore into self- contained pond and tank units. This was pioneered in Scotland by Otter Ferry Salmon in Argyll and I believe they currently have a very successful halibut farming operation on Gigha using these onshore techniques.  On-shore farming also eliminates the sea lice problem encountered on marine fish farms, avoids the pollution of large areas of seabed and gives salmon farmers absolutely no excuse to shoot seals.

I urge the Scottish Government to protect our marine environment and maintain the welfare of farmed salmon by legislating to remove all fin fish farms from Scottish waters and encourage the industry to change to onshore tank based systems.

PS. I find it unlikely that Meridian were the only salmon farmers to suffer loses in recent storms. Can you tell me what salmon farms have reported escapees since October 2013? Please give details including locations and number of fish lost. If necessary please regard this as a request under the Freedom of Information (Scotland) Act 2002 and/or the Environmental Information (Scotland) Regulations 2004.