Julie Thompson continues her series on photographing bands in Aberdeen taking in The Beards/Massive Horse, The Answer/Estrella and Federation of the Disco Pimp/Kagoule/Marionettes at The Lemon Tree, The 1975/The NBHD/Wolf Alice at The Music Hall, and chats to local music photographer Dod Morrison. 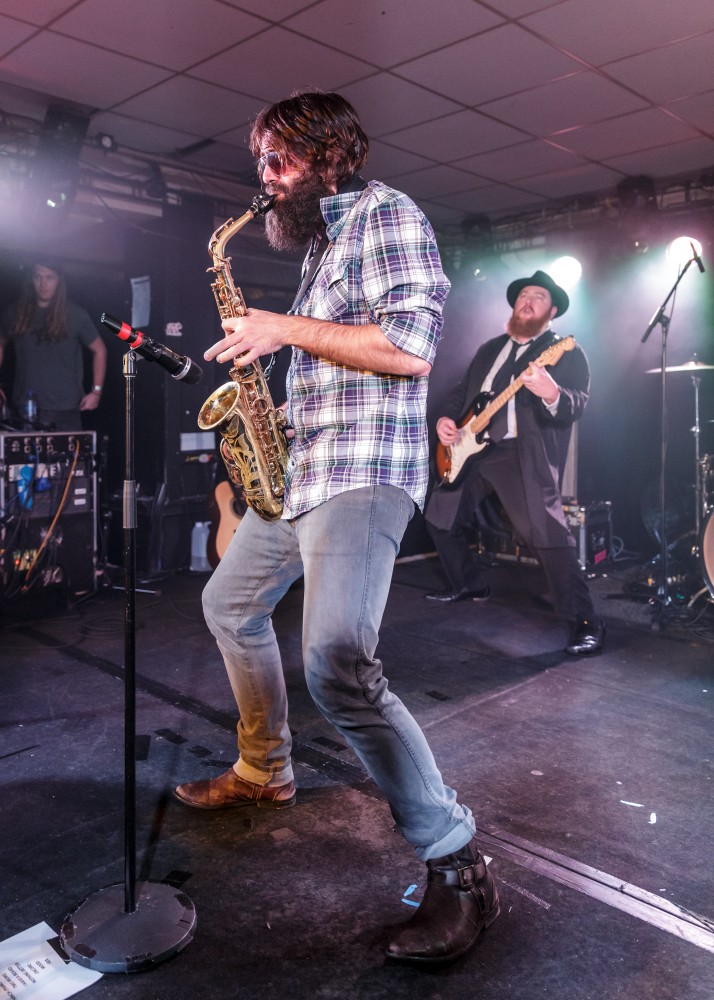 It seems somehow appropriate to be interviewing Dod Morrison, given that we both recently paid a visit to The Lemon Tree to photograph The Beards.

Dod sports a fairly substantial beard himself, although arguably not as luxurious as those attached to the band.

The Beards, a novelty band over from Australia were here to entertain us, along with their support – Massive Horse. Massive Horse are a couple of rappers, who use a projection screen to show videos, filmed to go with their songs.

These sorts of thing can be useful props when photographing bands – although getting the right moment for the image you’re after can sometimes require patience and a lot of luck.

Beard stroking commenced when The Beards came on. They stroked their own, they stroked each other’s. They even stroked the beards of members of the crowd.

The Beards base their act around the fact that all of their songs are about beards, but that aside, they are actually pretty good. Mostly rock but with some slower numbers, they entertain between songs with banter and some set pieces such as the band taking a break – the singer & lead guitarist had a chat over a beer while the bassist read a book about beards – leaving the audience to carry the chorus.

One track in particular tickled my funny bone; Shaved off his Beard . You can watch them perform on Youtube here: https://www.youtube.com/watch?v=KJkLH4uZ73M

All in all, it was a fun night.

The bearded (and often Mohicaned) Dod Morrison has been shooting gigs for some years – about half of them with professional gear – since getting the bug when he first took photographs of Hayseed Dixie on his wee camera back in 2004.

His biggest frustration is a fairly typical one, as I have found from reading other music photographer interviews:

‘PR companies messing ya about or be replying or forgetting to add you to list and the restrictions you get put on you when everyone in the crowd has a camera anyway.’

It does seem that people spend more time watching gigs live through a phone than actually looking at the band these days. It can be a problem for us when we are limited to shooting from the sound desk up at the back – all you can see is a sea of arms and hands with phones in them.

So, what bands has Dod found the most fun or exciting to photograph? 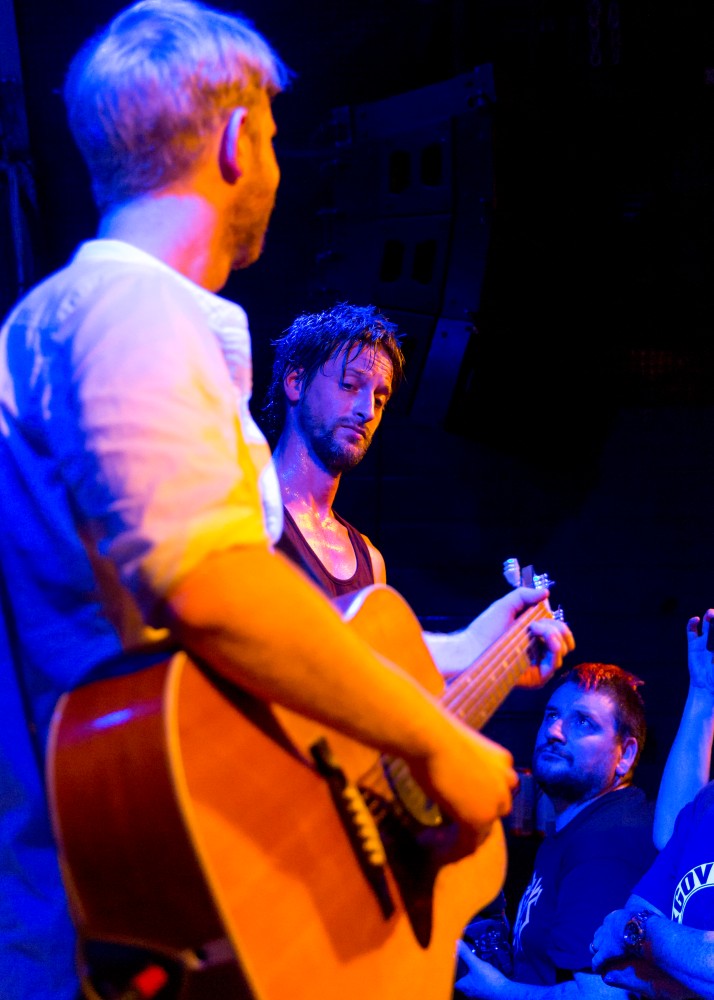 ‘The Adicts are the most exciting, along with Cock Sparrer and Rancid.’

He singles out the Adicts because he went on a 21 cities tour of America with them from coast to coast (New York to LA and back) including the House of Blues in Los Angeles. This was the furthest, to date, that he has travelled to shoot gigs.

The most famous names under his belt include U2, Iron Maiden, and Katy Perry and on that note we’ll stop for a while. The second half of this interview will continue next time

I’ve been busy photographing other gigs between my last Musings and this, but I never got chance to write them up before a chest infection, exacerbated by some smoke machines at The Music Hall, knocked me out of commission for a couple of weeks. I’ll quickly mention some of them and there are photos linked below for anyone interested.

In late January, Federation of The Disco Pimp arrived at The Lemon Tree, along with Kagoule and supported by local band Marionettes.

We arrived at The Lemon Tree to find the usual photographers pit missing – a new one to me at this venue. It did mean, after some discussion with security, that we had a bit of a free rein on shooting, as long as we didn’t get in the way or annoy anyone.

The local band, Marionettes, kicked off the evening. The band consists of 5 mostly local lads (some hail from Glasgow) and were actually good fun, sparring with the crowd and producing some nice bouncy music.

Next up were Kagoule, who are a very young (17 years of age) three piece grunge/post punk band – 2 lads on drums & guitar/vocals and a lass on bass and are already proving to be an exciting new addition to the music scene. In a departure from my normal gig routine, another photographer and I had a short back stage shoot with the band.

FOTDP are a seven-piece funk band – 2 saxophones, a trumpet, keyboards, 2 guitars and drums make up this ensemble. No vocals as such so finding the focal point for shooting was tricky. However, concentrating on the instrument lead at the time seemed the way forward. They were a pretty good band – if you like to strut your funky stuff, try and catch them if they come again. 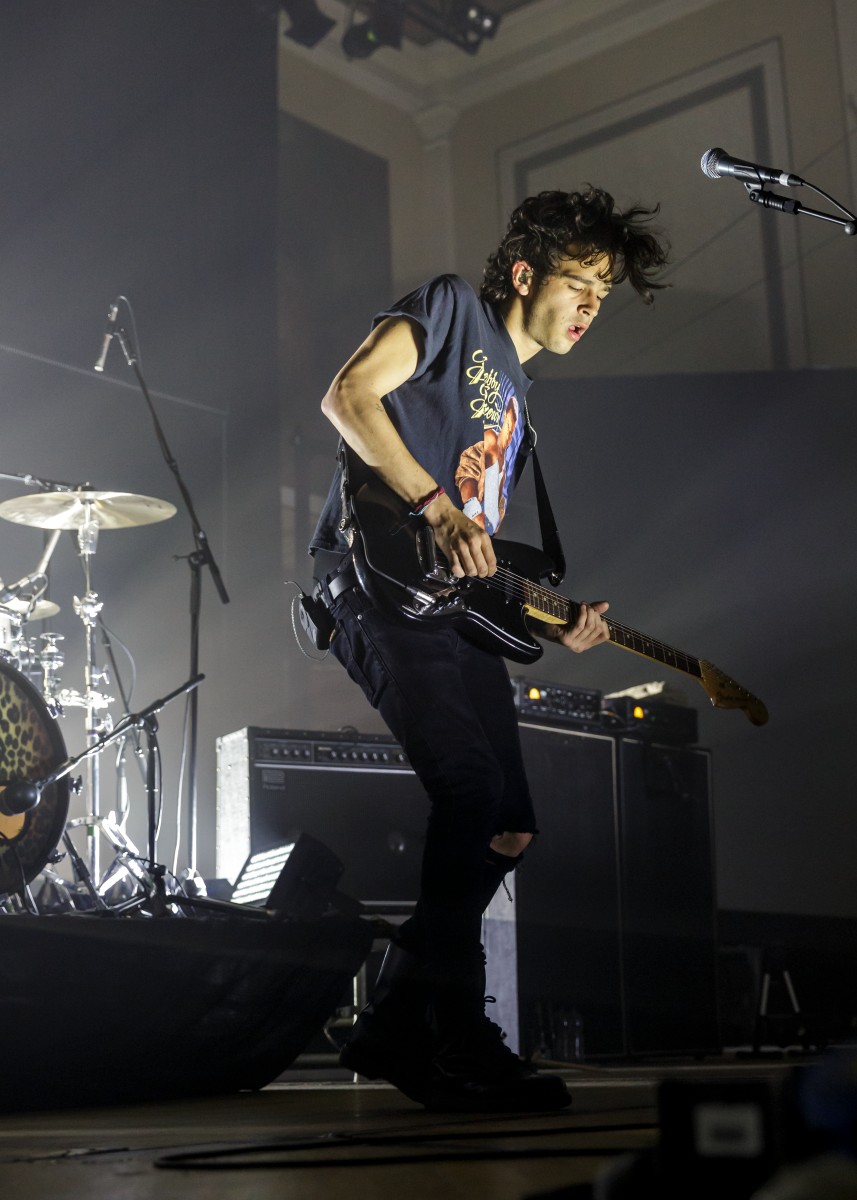 The 1975, supported by The NBHD and Wolf Alice, played the Music Hall in early February.

When I arrived, there were young folk queuing into Golden Square, and some of those at the head of the queue were wrapped in blankets after being waiting for some time.

First up was Wolf Alice, which is a four-piece alternative rock band with a female lead. The lights were really down low for this band, giving me a challenge.

The NBHD (also known as The Neighbourhood) are an alternative rock band from California, formed in 2011. The crowd at the Music Hall seemed pretty familiar with this second support act. For this band and the next, there were strobes and smoke machines – not my favourite combination.

Headlining the young trio of acts, The 1975 hail from Manchester and are an up and coming alternative/indie foursome whose debut album hit number 1 in the UK Album charts back in September last year.

Fronted by Matthew Healy, sporting a floppy Mohican, it was a surprising accomplished performance with Matthew having the stage presence you’d expect from the lead. They are no boy band and they don’t stick to single instruments – swapping between guitar & keyboard, or adding in a sax solo and they seem to enjoy what they do – which shows in their performance.

Their highest charting single, Chocolate, reached 19 in the charts last year. They will be playing at T in the Park along with The Isle of Wight, Reading & Leeds festivals in the summer.

Later in the month was The Answer at The Lemon Tree – signed to the same Agency as The 1975. 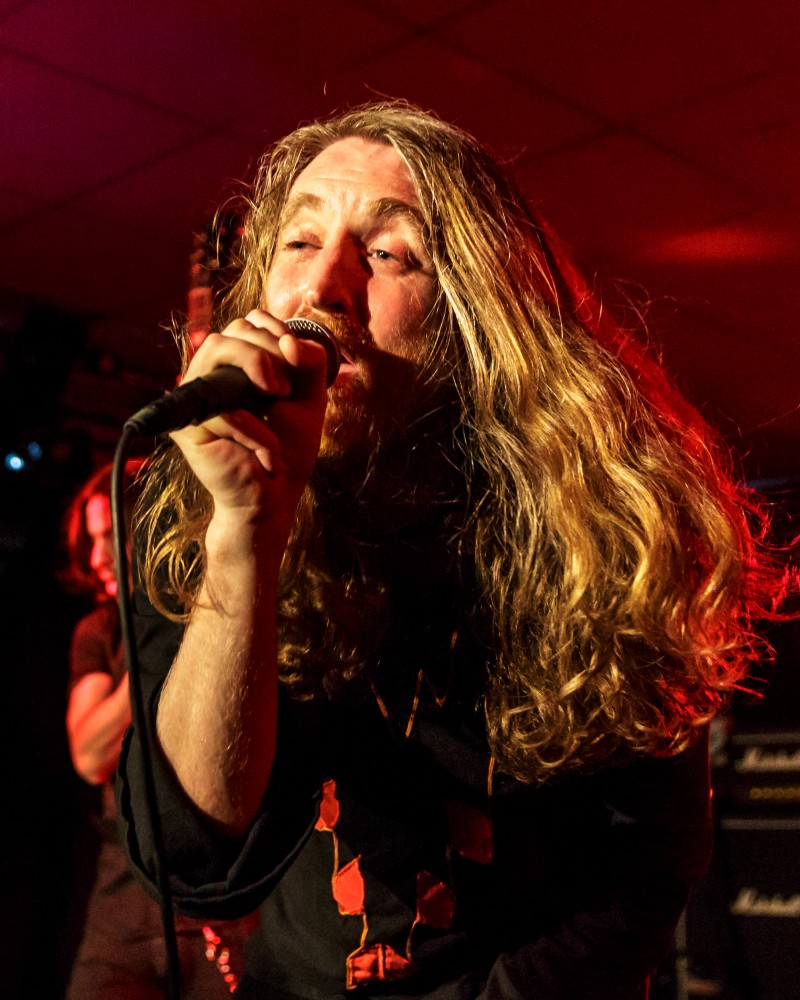 Their most recent album, New Horizon, was released last year.

They were supported by Scottish band Estrella, originally from Thurso but relocated to Aberdeen. They play 80’s style rock and have the look to match – entertaining and fun to shoot.

Coming up next – the second part of the Dod Morrison interview, along with Indian Red Lopez at the Peacock Visual Arts Centre, Kid Canaveral at The Tunnels and March of the Mods.