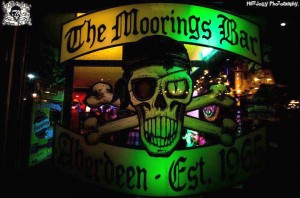 With Thanks to Craig Adams.

The Moorings Bar is holding a reunion night for customers who attended during The Shep Era between 1965 and 1976.

The idea of a reunion was sparked when the bar launched a Facebook appeal for nostalgic photos.

A regular from the early 70s submitted a photo of previous owner Simpson Shepherd, and this led to much on-line dialogue and reminiscing.

A few weeks later some of the regulars from 40 years ago visited the bar on a Saturday afternoon and met with current owner Craig Adams, they then floated the concept of a reunion party, with the Sunday of the September holiday weekend earmarked as a suitable date.

Craig, who has a love of 60s and 70s music, then organised The Palmer Eldritch Band to perform, and also volunteered his services as a DJ.

The reunion takes place on Sunday 22nd of September at 8pm.  Tickets are £4 advance from either The Moorings Bar or Box Office Aberdeen, or £5 on the door.

Ticket sales have been strong, with over a hundred sold to date.