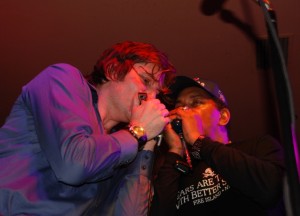 Giles Robson & the Dirty Aces will appear live at Aberdeen Blues Club in The Blue Lamp on 12 September.

Only in his mid twenties, Robson is the leading blues harmonica player of his generation who hosted a harmonica showdown at the Great British R&B Festival last weekend in the company of world-renowned players Charlie Musselwhite, Sugar Blue and Billy Branch.

The band’s 2011 debut release Crooked Heart of Mine earned enthusiastic reviews and the forthcoming album From The Basement is likely to be the first British blues album released on leading Chicago-based label Alligator Records.

The band plays high energy blues and R&B with new wave grittiness and are slotting in this exclusive mainland Scotland show as they travel between the Monaghan and Shetland blues festivals.

Doors open at 8pm. Tickets bought in advance from The Blue Lamp cost £8 or £10 on the night