The Scottish SPCA is appealing for information after a cat was found injured in Kincorth, Aberdeen, believed to have been thrown from a car. 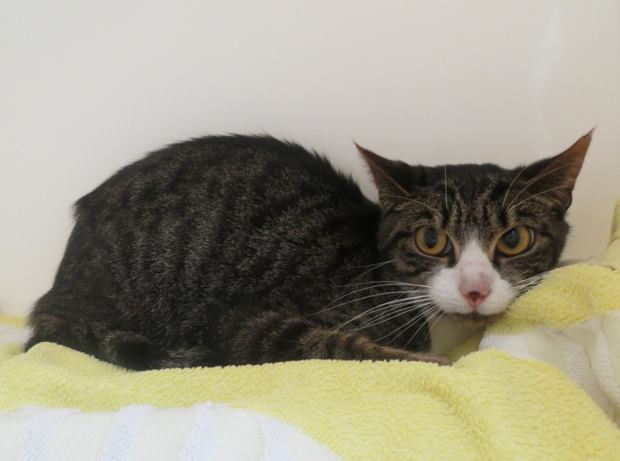 Scotland’s animal welfare charity was called to rescue the grey and white female tabby cat after a couple reported seeing her being thrown from a red hatchback car travelling along Cairngorm Drive at around 7.45am on Tuesday morning (20 August).

The cat landed on the road and was then run over by another car following behind.

Remarkably she escaped with only minor injuries and is now recovering in the care of the Scottish SPCA’s Aberdeenshire Animal Rescue and Rehoming Centre at Drumoak where staff have named her Delilah.

“Understandably Delilah was absolutely petrified when I came to collect her and she just wanted to coory into me for comfort.  I took her straight to the vet to be examined but amazingly she has survived her terrifying ordeal with only scuffing to the pads of her feet and a small scrape on her nose, although we’ll continue to monitor her condition in our care.

“The couple who witnessed the incident said they saw something being thrown from the car before it sped off and then they saw the cat lying on the road. Unfortunately they said the car travelling closely behind ran right over the top of her and she tumbled to the side of the road before darting away through gardens and settling on a window ledge.

“Delilah has used up at least two of her nine lives in what appears to have been an incredibly cruel act.  Although this was a fairly quiet, residential street, it is just off a busy main road so someone may have seen the car in the area and may have noticed the occupant(s) acting suspiciously.

We are very keen to trace the person or persons responsible for Delilah’s abandonment so we are asking anyone who recognises the cat or witnessed the incident to contact our Animal Helpline on 03000 999 999.”