PAUL RODGERS, iconic rock/blues singer and songwriter from FREE, BAD COMPANY and THE FIRM, along with his wife Cynthia Kereluk, visited Willows Animal Sanctuary on Tuesday the 5th of June. Aberdeen Voice’s Suzanne Kelly was on hand to meet the new patrons and say hello to some old friends. 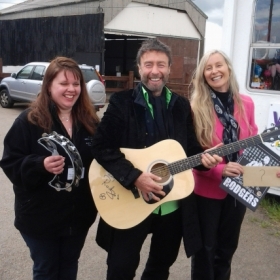 Willows Animal Sanctuary received a huge boost when Paul Rodgers and his wife Cynthia announced this past Tuesday that they would be active patrons of the animal charity, which celebrates its 12th anniversary this year.

The couple spent a considerable time speaking to the media and to fans, sharing their (considerable) rescue animal stories, touring the facilities, visiting the animals – and crucially launching a raft of helpful fundraising initiatives.

To celebrate the 12th Anniversary of Willows’ services to animals (rescued or abandoned farm, domestic and wild creatures) and people (with animal assisted therapy), there will be a raffle, featuring prizes connected to and autographed by the new patrons.

An acoustic guitar, freshly signed for the raffle by Mr Rodgers (or ‘Paul’ as he said we should call him) was used for an impromptu version of ‘All Right Now’.

The assembled press did not make for great backing singers it’s true – but it was a great deal of fun.  Other raffle prizes include:

AND a DVD will go to the first 50 people who donate £20 (so – do get in there!  – Willows website has details for donating via PayPal)

Along with their patronage and the anniversary raffle, the couple’s plans include:-

Willows, like other shelters, is under great pressures – economic downturn, increase in animal feed costs, unpredictable veterinary treatments, and unforeseen rescues all take a toll.  Despite the excellent results the animal assisted therapy delivers, Willows receives no Government funding at all.  As both Paul and Cynthia said, ‘We all want to see Willows continue.’ 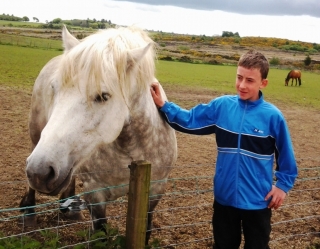 There is a full programme of monthly events, which will include a Sandi Thom concert on 15 July.  Ms Thom grew up in the area, is a long-time supporter, and has adopted several animals (including a beautiful, formidable 18 hand horse named McGill).

Thom was instrumental in bringing Willows to Paul and Cynthia’s attention.

Within the first few minutes of the press conference, it became clear Paul and Cynthia are committed, genuine animal lovers.

Their stories include homing more than a few rescue animals (36 rescue cats at a peak), and physically rescuing cats from Mexico (more on their experiences will be published next week).

This was their first visit to Willows, but it was clear they had done their homework, for they knew the majority of the animals’ names and the stories behind them.  For instance Cynthia knew several of the cats and had asked to see specific ones, and was soon tending to long-term resident Arthur, who needed some medication.

A clear favourite, a sweet three-legged cat named Elly seemed to be following Paul and Cynthia as we toured the farm.  They say that cats know who cat lovers are; it certainly seemed to be true.

“There are over 300 animals here, and a story for each one,” Rodgers said

“…there’s definitely a book to be written about Willows.”

I do believe he’s right.

Sixteen year-old Kelsey was also on hand to help with the press conference; he gives some of his time each Sunday to come and help out – which is no mean feat with dozens of stalls to clean, hundreds of animals to groom, and a mountain of farm chores.  His favourite is a delightful pony named Amber.

Jenny Gray, Manager said “We are delighted that Paul Rodgers and Cynthia Kereluk Rodgers are visiting Willows Animals Sanctuary. We have talked extensively about the problems faced by Willows and it is wonderful that we are going to finally meet them! Willows is in trouble at the moment as we only have funding until the end of July.”

“Recently, we have been overwhelmed by the number of animals needing help and we urgently need more donations to help us to continue helping unwanted, abused and abandoned animals. We are entirely funded by public donations and receive no government funding.

“Unlike larger charities, we have no reserves of money and are desperately short of funds. We specialise in helping elderly or more vulnerable animals that have already been refused help by well-known large national charities. We can only continue to help needy animals with your support.

“At present, Willows cares for over 60 horses, ponies and donkeys and more than 100 farm animals and birds, approximately 60 cats and dogs, 30 rabbits and many other small animals and reptiles. Many of these animals are very elderly, have been treated cruelly, neglected or are simply unwanted – Willows is their only hope.”

“We also have an on-going Animal – Assisted Therapy programme for vulnerable people in the community. This programme has helped many people gain confidence and new skills enabling them to seek employment or other opportunities. It has proved to be very beneficial for our clients’ on-going recovery and we helped hundreds of people each year. We need your support to keep this hugely beneficial programme going.”

“We are currently just down from 15 cats to 8 and have a 95 lb rescue dog, so my fingers are crossed that Cynthia does not fall in love with yet another set of sad eyes.Willows does such a great job, and we want to see how we can help them secure their future so that they can continue to care for, love and find forever homes for these abandoned sweet souls.”

Aberdeen Voice readers can contact Willows as follows (why not arrange a visit, adopt an animal and/or buy a raffle ticket?):-