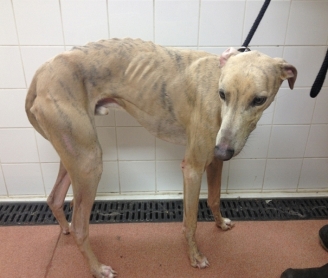 The Scottish SPCA is appealing for information after an emaciated and wounded dog was found collapsed on a Stonehaven street.

Scotland’s animal welfare charity was called to help the two year old lurcher after a member of the public discovered him lying on the ground at Carron Gardens on Sunday afternoon (5 May).
The dog was dehydrated, starving, covered in painful wounds and suffering from a skin infection.

Animal Rescue Officer Karen Hogg collected the dog and took him to a local vet for treatment before transporting him to the Scottish SPCA’s Aberdeenshire Animal Rescue and Rehoming Centre at Drumoak, where he has been given the name Conan.

“We don’t know whether Conan has escaped from home or been abandoned by his previous owner, but it’s clear he has been severely neglected. A dog of Conan’s size and type should weigh around 28kgs but he’s only just 20kgs.

“He was very hungry and thirsty when he first arrived but we’ve been giving him small, regular meals and he’s eating well. His skin is red and inflamed and his wounds are painful to touch indicating he is likely to have been kept in dirty living conditions and on hard ground.

“Conan is responding well to treatment and painkillers are keeping him comfortable.  We can’t understand why anyone would treat an animal in this way, it’s heartbreaking.

“Despite everything he’s been through Conan is a sweet-natured and gentle dog who has lots of love inside him and, once he’s recovered from this awful ordeal, we’ll be looking to find him a loving new home.”

Causing an animal unnecessary suffering is an offence under the Animal Health and Welfare (Scotland) Act 2006. Anyone found guilty of doing so can expect to be banned from keeping animals for a fixed period or life. Anyone with information is being urged to contact the Scottish SPCA Animal Helpline on 03000 999 999.