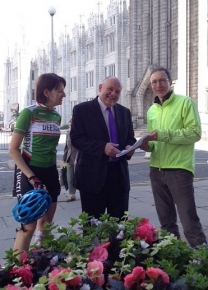 Members of the Aberdeen Cycle Forum have handed a 700-plus signature petition about the Westhill Cycle Path to City Council leader Barney Crockett.
The Forum’s Derek Williams explained the background to Voice.

The petition calls on the Council to improve sections of the Westhill cycle path which serves the new Prime 4 development at Kingswells.

The main concern of Forum members and regular users of the path is a narrow section that runs dangerously close to the A944 Westhill to Aberdeen dual carriageway.

The Forum is also requesting improvements to the barriered Cyclists dismount section near to the Five Mile Garage.

The petition was raised following many frustrating months of failing to convince city planners that the cycle path needs improvement in order to encourage cycle use, and also to go some way towards guaranteeing user safety along this busy commuter corridor.

“The response we’ve had to the petition has been amazing and shows that people recognise the need for improvements. We know cyclists think the narrow stretch is unsafe and this will undoubtedly put some people off cycling to Prime 4. The result will be more car commuting and congestion. With people moving onto Prime 4 soon, it is vital that the Council gets on and fixes this section of the path.

“We hope that the Council Leader and councillors will see the strength of feeling, and will be motivated by the scale of the response to find a way to make progress.”

The Forum is committed, says Derek, to continuing to work with City councillors and officers to see through improvements to the path, thus improving the wellbeing of local cyclists. It extends its thanks to those who signed the petition and to everyone who made the effort in helping to collect signatures.