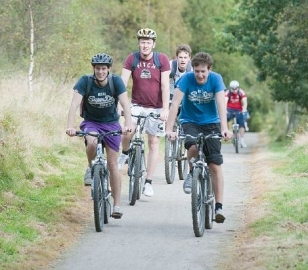 Whilst the headlines have been grabbed by the magnificent Wiggo, the delightful Laura Trott, Sir Chris Hoy and our old Paralympic gold medallist Neil Fachie in a vintage year for two-wheeled endeavour, little publicity has been afforded another Aberdeen Cycling Champion, Ross Thomson, Conservative Councillor for Hazlehead, Ashley and Queens Cross and occupant of that Council role.
David Innes freewheeled alongside Ross over Town House coffee.

How did the role of Cycling Champion come about?

It’s something the Aberdeen Cycle Forum included in their manifesto, a list of things they wanted to see after the local elections. The Forum’s view is they wanted someone within the council to promote the views of cyclists. They felt there had been a barrier to them getting a voice, but now I’m working quite closely with the Forum. As an administration, we know the benefits of cycling, so wanted to promote it. It’s a role I was quite keen to take on. I’m surprised this wasn’t given prominence before, given the issues of pollution and cycling’s health benefits.

What about the specific role?

There was nothing set down, so I’m kind of writing my own job description! I discussed all the issues that concerned the Cycle Forum in numerous meetings and found out what they’d like to see happen in the city. I sat down with council officers, too. I found it surprising there was no one person responsible for cycling, that it was broken up between different services. I found myself going from pillar to post trying to get something done, whether it was about bike stands, or issues about a particular road junction

So, one commonsense thing I thought needed sorting out was communication, a frustration for the Forum too, so I’ve set up a meeting with all relevant players. This first proper meeting will be in January and will include people from Planning, Traffic Management and the Forum. This will mean that if the Forum has issues to raise with Planning about cycling, for example, on a new development, they can raise them directly with planners before and during the development, rather than comment on them afterwards.

On matters of junctions and the city cycle network, they can talk directly with staff from the Traffic Management team. The Forum now copies me in any correspondence they have with departments which will lessen the frustration the Forum has felt about not always getting responses. This will mean we can actually get things done!

Already there’s a review of junctions going on and the delay in installing cycle stands at Marischal College is being attended to. This is very much the beginning, but as long as there’s a voice in the council, in committee, including Education, we’ll start to see something positive come from the role, although we’re still defining it.

Getting cycling on to the agenda, then?

That’s the best way to put it. I’m not the expert. Derek from the Forum is very good in terms of keeping us up to date with Scottish Government regulations and is a fount of knowledge. I’m in a position to take that information to officers and exert a bit of influence.

How can individual cyclists with issues to raise get in touch and begin to influence what the council does?

I would actively encourage them to get in touch with me by e-mail. Some people have already been in touch about the inadequacy of the route connecting to the new development at Kingswells. The Cycling Champion role hasn’t been well-publicised, with just one mention in the Evening Express, I think, when the role was announced.

Send us your press releases!

We certainly will. We will look at getting something on the council website, a dedicated page maybe, as I want to be accessible. It’s a frustration for many of us in the council that initiatives don’t tend to get the publicity we feel they deserve.

In straitened economic times, is there a specific budget for the work you need to get done, and how best would you see that being best used?

In Planning, Enterprise and Infrastructure, one of the main departments I deal with, there is a team that deals with cycling but the resources are eaten up by many other issues too – pedestrian safety is an example. Funding comes from the PE&I Committee. There is specific ring-fenced funding for cycling from the Scottish Government.

We need to ensure that’s effectively used and we need to make sure we bid for resources when they’re made available. We’re trying to encourage more schools to provide Bikeability, a new form of Cycling Proficiency, and the Scottish Government has just launched a scheme to help provide for that and our officers will be bidding for funds.

You might be surprised to know that most schools aren’t doing it. I’ve persuaded the Director of Education to write to schools asking them what they need to encourage this – what are the obstacles and so on?

It took me a while to find out who was responsible. I eventually got a meeting with the City Wardens (who are), the Cycling Forum, some people from EP&I, and the education convenor. We all agreed we wanted Bikeability promoted in our schools. Some of the guys from the Cycling Forum volunteered to help with that and the City Wardens said they wanted to commit more resources to it. So, we’re engaging with schools now and once we get the responses we can get resources out there. It’s so important.

There are some things that don’t cost an awful lot. I did a cycle tour of the city centre which was great, and I found out where investment has been made and has paid off. Re-prioritising some of the routes, for example allowing cyclists exemptions on some one-way streets could make the network so much more permeable and easier for cyclists to negotiate and make it safer in some ways.

Safety-wise, Anderson Drive is a huge concern. There’s been a recent tragedy there and we need to get congestion out of the city to make it safer, easier and more enjoyable for cyclists. In the Planning department, there are pictures of Aberdeen from the 1920s and ‘30s with pedestrians walking about, crossing roads with no fear.

I think the Western Peripheral Route will take traffic away from the city centre and if Union Street isn’t so clogged up it will encourage people who don’t cycle at the moment to take it up. When I did it for the very first time I had people with me, which helped, as they knew what they were doing.

How are you prioritising use of the funding you do have?

The meetings I’m planning will help set priorities. We need to build from the bottom up. An officer may have cycling as part of their brief, but that has never been prioritised. This role should help put cycling firmly on the agenda.

Sometimes, it’s the small things that make a big difference. Justice Mill Lane is currently under consideration and it’s proposed that it might be one-way and that right turns on to Holburn Street will be banned. The Cycle Forum feels that such a ban might deter people from cycling, so I’ll be trying to have that exempted for cyclists and EP&I will be looking at that, by engaging with the Cycle Forum.

It’s the same with the ban on traffic going straight ahead into Guild Street from Virginia Street. This has been criticised as it puts cyclists on to the Market Street dual carriageway with its narrow cycle lanes, heavy traffic and large vehicles. We’ve managed to get that made only temporary so the impact can be assessed. There will be a report on the findings at the next committee meeting, including usage by cyclists. They also need to consult the Forum about it. These are baby steps, but it’s improving consultation.

Does the council insist on cycling-friendly measures when discussing plans and applications for new developments?

It’s council policy to cover this. For example, new-build flats should have bike stands provided, but I’ve found out this doesn’t always happen and it’s not always included in reports. Officers tell me the developers said this is something they might not be able to achieve due to other concessions they’ve had to make in the design.

Now they’ve got someone here to say, ‘Well, no. We have a policy in place, we should be abiding by it.’ It frustrates me but it happens all the time when there is clear guidance in black and white, yet it’s not always being followed. You look through reports and you wonder why, whether it’s affordable housing or for cyclists. Why have a policy if you’re not going to commit to it, or deliver on it?

The meetings will help, especially with planners attending, since they deal with all the new applications coming in. It frustrates the Forum and many others that developers should be contributing to the road infrastructure and the community in some shape or form.

Aberdeen’s been pretty bad in getting its share of planning gain and developers will argue on the basis of margins being so tight, the cost of land and construction so high, that they can’t afford to give anything extra towards planning gain, that these additional costs would put the whole development at risk.

It’s a bit of a balancing act. Some people would like to see planning gain from the Kingswells development to the cycle corridor as it is unfit for purpose – it becomes so narrow and the hedges are so overgrown that it becomes quite dangerous.

The meetings will allow the Forum to see what applications are coming forward and they’ll be able to challenge the planners there and then. They know the town and the routes where cyclists like to travel – and will be able to ask ‘can you try at least to put a case to the developer?’ to invest in the cycle network in the area where it can make a positive difference. We may not always be successful but we can make sure we’re always making a good case.

We need to keep an eye on new developments to ensure that cycling provision is delivered. There’s not much I can do about the cycling provision at the Triple Kirks development, where, as well as there being not enough bike stands, cyclists will be forced on to the Denburn dual carriageway to get access to the bottom level car park. Coming out of the car park will force them down the dual carriageway into the one way system around the railway station when there could be something at the front of the development. It shows how cyclists were an afterthought in that case.