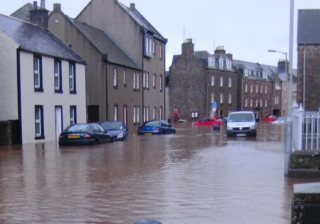 “I’m pleased to say that despite the difficulties we faced we continued to provide a valuable service to existing and new carers throughout south Aberdeenshire.”

The former building, in Arbuthnott Place, was severely damaged by the flood three years ago and again last December.  Before securing the new office in Evan Street, Moira worked from home and VSA headquarters but heavily relied on support from local organisations:

“Thanks to kind support from the Belvidere Hotel in Stonehaven, the Care Management and Community Learning and Development teams in Portlethen I could continue with meetings, like monthly carer groups and one-to-one sessions.

“The open day is an opportunity for people to find out about the range of support available to adult unpaid carers, meet fellow carers, enjoy some well-deserved pampering and explore special interest groups, like the art workshop.”

“I want to personally thank everyone in the community who rallied round to support VSA at this challenging time.  I’m delighted that we were able to keep the service going throughout and can now launch an exciting new centre for local carers.”

VSA’s Stonehaven Carers’ Centre shares its office with PAMIS, an organisation that supports people with profound and multiple learning disabilities across Aberdeenshire city and shire.