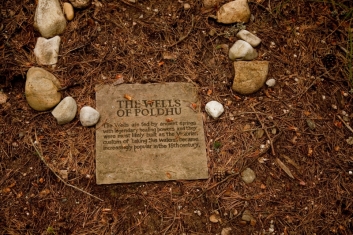 Robert Burns died on 21st July 1796 at the early age of 37. There are many theories as to the cause of his death, ranging from venereal disease to rheumatic fever.
The years of hard labour he spent as a tenant farmer must also have taken their toll and the severe winter of 1795 must have exacerbated his already poor health.

In a final effort to regain good health, the bard was advised by his doctor, William Maxwell, to visit Brow Well near Dumfries, there to drink the spring water which contained the mineral chalybeate which was then widely believed to have good and curative properties.

On July fourth 1796, Burns duly drank the foul tasting water from the iron cup attached to the well and seemingly also waded chest deep into the freezing cold tidal waters of the Solway Firth. An event famously commemorated many years later by the ceramicist Bill Brown of Glasgow School of Art who produced a series of ceramic plates depicting Burns taking the water on the Solway Firth with the, now decommissioned, Chapelcross Nuclear Power Station as a backdrop.

In a final letter to his friend Alexander Cunningham Burns wrote:

“Alas! My friend, I fear the voice of the Bard will soon be heard among you no more! For these eight or ten months I have been ailing, sometimes bed-fast & sometimes not; but these last three months I have been tortured with an excruciating rheumatism which has reduced me to nearly the last stage.

“You actually would not know me if you saw me. Pale, emaciated, and so feeble as occasionally to need help from my chair — my spirits fled! Fled! — but I can no more on the subject — only the medical folks tell me that my last & only chance is bathing & country quarters & riding.”

It is perhaps little wonder really, that Burns died within days of his so called “curative” water treatment experience and he was of course duly buried in Dumfries on 25th July 1796.

Medical bathing, also called balneology, or hydrotherapy, was an approach popular with physicians in Burns’ time with various medical proponents claiming that exposure to mineral waters might well improve certain diseases and indeed effect cures where all other treatments had failed.

In the 16th and 17th centuries mineral springs became popular among royalty and the well-to-do. Many wealthy land owners built health spas on their estates and would invite the good and the great to take the waters for medicinal and recreational purposes. 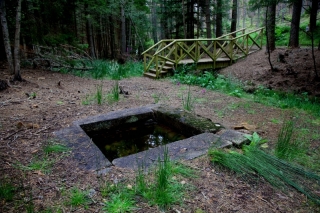 A sort of hot tub experience, but without the heat perhaps.

Ordinary people would also “take the waters” at local mineral springs for relaxation or to seek specific cures.

Physicians even began to set up shop beside the spas and would often recommend specific water treatments such as baths, steam, douches and of course the drinking of the spa waters to their patients.

The book “A Dissertation on the Use of Seawater in Diseases of the Glands” published in 1750 by one Dr. Richard Russell, remained a popular reference book on the subject for several decades and it may well have influenced Dr. Maxwell, who famously recommended that Robert Burns try the springs at Dumfries’s Brow Well as well as the freezing dip in the Solway Firth.

In recent years however, interest in the historic site has been revived

Logie Coldstone in Aberdeenshire is home to the little known Poldhu Wells. The granite-lined mineral springs of Poldhu Wells were once believed to have curative properties and were, for a long period, a popular attraction for those seeking healing waters to cure them of “scorubic and gravelish disorders”.

The wells are mentioned in the First Statistical Account of Scotland (1791-99) and are there described as:

“a mineral spring in the parish of Logie Coldstone, a little to the south of the church, called Poldow, which in Gaelic, signifies ‘a Black Pool’, the water of which some years ago was much, and successfully, used for scorbutic and gravelish disorders”.

By the Second Statistical Account (1834-45) interest appears to have somewhat waned and the wells were said to be “occasionally resorted to by some, for the benefit of their health, and by others for amusement”.  Gradually interest in the Poldhu Wells appears to have largely become confined to those living in the immediate locality.

The great gale of 1953 caused widespread damage in the North East and the woodland around Logie Coldstone and Poldhu Wells was devastated when the violent storms brought down the trees around the site and with time, a rhododendron thicket enveloped the wells and hid them from sight of the casual observer.

Over the next fifty-five years or so an accumulation of leaf mould and silt blocked the drainage outlets from the wells.

In recent years however, interest in the historic site has been revived following the chance discovery by members of the Cromar History Group of a 1912 postcard showing a vintage photograph of the Poldhu Wells. Following this discovery, the group decided they wanted to try and return the wells to their original historical condition.

During 2008, with the help of local contractors, Cairngorm National Park, Craigmyle Estate and funding from the Adopt a Monument fund, they have removed vegetation surrounding the wells, dug drains to take away water that was flowing from the forest floor above it, consolidated and refurbished the stonework, unblocked culverts and constructed new entries to the culverts.

A new path was also laid between the wells and a new bridge was built to replace the Victorian one that had vanished in around 1912.

In this modern age, It may well be that these quite delightful, natural mineral springs no longer have curative properties attributed to them, however they are certainly well worth seeking out, if only for a well deserved foot bath at the end of a days walking in the area.

I am sure Burns would approve.

2 Responses to “Taking The Waters At Logie Coldstone”