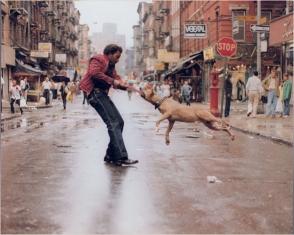 When uninhibited couples discovered that open-air sex has its own special thrill they began meeting in car-parks, and the doggers found a new and rich supply of voyeuristic fun.

Moreover, the doggers soon realised that couples were actively encouraging them to watch, even performing for them, and sometimes allowing them to join in.

Section 66 of the law specifically states that if doggers intend to cause alarm or distress to members of the public then they are breaking the law and face consequences. In other words, it is not illegal to have sex outdoors but you can get in trouble if an innocent passerby spots you and is offended.

So, if you’ve got a spotty bum let’s get Mr Clearasil to work and give those cheeks a good airing.

To attract the attention of fellow doggers: flash either headlights or interior car lights.

Interior car light on – invitation for any nearby doggers to watch.

Car windows open – invitation for any nearby doggers to touch, grope or feel.

Car door open – invitation for any nearby doggers to participate in sex act.

Bent naked over bonnet of your car  – basically an open invite to all comers although a certain amount of decorum in the shape of an orderly queue should be maintained. Play nice, people.

Why dog at all?

Although obviously the protagonists main motivation is sex many doggers cite such other benefits as getting out in the fresh air and meeting lots of new people.

The Counteswells Car-Park opposite the EquestrianSchool has a thriving evening turnover with Friday and Saturday nights apparently best for the serious dogger. Daytime action tends to be most common at Parkhill Picnic Area at the Bridge of Don although there are other areas around the city – down beside the river near Baker Hughes in Stoneywood and the road at the end of Leggart Terrace towards Banchory Devenick being two other favoured locations.

Top Dogs in the UK

A Window of Opportunity

Let us instead look upward and onward and above all, innovatively.  Since Union Terrace Gardens aren’t going to be home to a conglomeration of chain stores that will bring in more tourists every year than the Grand Canyon how can we best utilise it  in its present format?

Commercially, this could be a goldmine for the city

Perhaps Ann Summers might want to open a stall for those ‘last minute things’ that one of the protagonists has forgotten to pack. Attendants could also roam the Gardens selling KY Jelly, Viagra  and ‘interesting’ condoms.

Over to you, Comrade Barney.