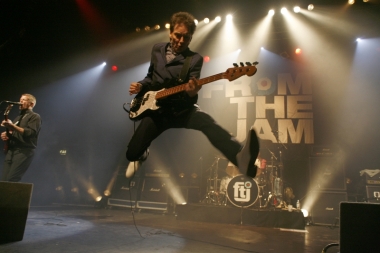 From The Jam is Bruce Foxton, original bass player from The Jam, Russell Hastings and Mark Brzezicki.  From the Jam gained an immediate reputation for the kind of incendiary ‘live’ performances that sealed the reputation of The Jam.  Tickets for the Lemon Tree on 5 May are £20.

There were also incredible scenes when Bruce recently appeared ‘live’ alongside Paul – for the first time in 28 years – to perform The Jam classics ‘The Eton Rifles’ and ‘The Butterfly Collector’ as well as ‘Fast Car/Slow Traffic’ at the second of Weller’s five night residency at the Albert Hall.

Subsequently, the two worked together on the sleeve notes of the 30th Anniversary release of ‘Sound Affects’ by The Jam.

Bruce has a new album out, ‘Back in the Room’.  PAUL WELER now appears as one of two Very Special Guests on this new album, along with Stax and Blues Brothers legend, STEVE CROPPER. The album contains a total of 12 tracks, all written by Bruce Foxton and From The Jam vocalist/guitarist, Russell Hastings.

The Jam had amazing chart success with 18 singles and 7 albums to make the top 40 in the United Kingdom from their debut in 1977 to their break up in 1982. Their last 5 albums were all top ten hits and their last 8 singles made it into the top 10. ’Just Who Is the 5 O’Clock Hero?’ made the charts at no. 8 as an import and remains one of the the best-selling import singles of all time in the UK.

BRUCE FOXTON is a part of the English Rock and Roll establishment. A musician (born 1/9/1955 Woking, Surrey) who is most commonly recognised as the bass player in legendary The Jam and Stiff Little Fingers.

In The Jam, he and drummer Rick Buckler were the driving force, power and rhythm section behind singer, guitarist, and songwriter Paul Weller. Bruce’s versatility is evident, taking lead vocals on ‘David Watts’ (The Kinks) and ‘News Of The World’,which was one from his own catalogue of compositions. Foxton’s most notable work was ‘Smithers-Jones’, featuring bass/guitar/drums for the B-side of ‘When You’re Young’ and later reworked with strings for the ‘Setting Sons’  LP.

After The Jam split in ’82, Foxton pursued a solo career. He had a hit with the single ‘Freak’ and collaborated with other musicians, until he got the call from Stiff Little Fingers’ Jake Burns, staying with SLF for fifteen years, recording four albums, namely, ‘Flags and Emblems’, ‘Get a Life’, ‘Tinderbox’ and ‘Guitar and Drum’.

In 1994, Rick and Bruce collaborated on ‘Our Story’, a biography of their eventful and cherished years in The Jam. Bruce toured with Bruce Watson, Mark Brzezicki (Big Country) and Simon Townshend (The Who) in 2006 as The Casbah Club supporting The Who in the U.K and Europe promoting their new album ‘Venustraphobia’.

RUSSELL HASTINGS (born 6th July 1965,Sussex England) worked with Rick Buckler since November 2005. A musician/vocalist in his own right Russell has shocked audiences nationwide this year with his authentic and passionate interpretation in performance (vocals and guitar) of The Jam’s back catalogue.

Russell grew up on The Jam and this is evident in his attention to every detail, from the Rickenbacker to the Marshall 4×4 everything as it was and should be. Energy, pride, execution and dynamic delivery remain his hallmarks as he continues to collaborate with Bruce as From The Jam..