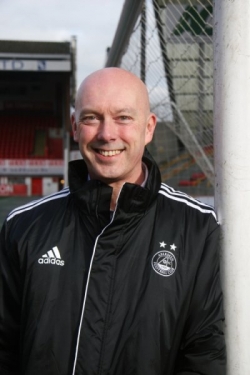 Aberdeen Football Club has appointed a former Grampian Police Inspector as its new Head of Community, a role that will see its areas of responsibility grow considerably over the coming months and years.
Although born in Dundee, Ally Prockter considers himself to be a life-long Dons fan and, as he explains, his new position will involve community in its widest meaning:

“When George Yule outlined his vision to me for AFC in the Community, one which encompasses far more than the club has previously been involved with, I was totally ‘sold’.   It is also a marvellous opportunity for me personally to continue to develop my own skill-set whilst contributing positively to the North East of Scotland, and of course to Aberdeen Football Club.”

Health, nutrition, fitness, education and social inclusion are just some of the far reaching areas that the 49 year old will be responsible for.

“AFC is an important and visible part of the fabric of the north east community and I’ll be looking to develop and engage in initiatives that will add value in all areas of our community, not just those involving football supporters.

“An additional aspect of my job will be as a visible and identifiable link between the Club and our fans, and my colleagues and I will do everything we can to ensure that all those interested in positively supporting this fantastic club will have the opportunity to be involved in getting the various, two way, messages across.”

Ally, who moved to the north east at the age of eight, is married with two daughters and a son, plus two step-daughters and a step-son.  His youngest daughter already plays football at Aberdeen Sports Village at the tender age of 5 while his mother remains a regular Pittodrie attendee at 80!

His career with Grampian Police began in 1980, when he joined straight from Bankhead Academy as a cadet, spanning thirty-one years before retiring in November 2011.  During his time in the force, Ally gained experience in a variety of aspects of police work including staff development and training, recruitment, community policing and a spell with the Scottish Drug Enforcement Agency.

Pittodrie Vice Chairman George Yule, who is well aware of the importance of the Club’s latest appointment, said:

“This is a hugely challenging position and one for which Ally ticks all the boxes.  Aberdeen Football Club needs to be seen to be more accessible and transparent and one of the main driving forces in bringing the community as a whole together.

“One of his initial tasks is to review the overall structure of AFC in the Community and identify appropriate initiatives going forward.

“Ally will work closely with all of our stakeholders to enable the Club to fulfil its duties and responsibilities as a role model across the region in the promotion of health, fitness, education and life skills in addition to supporting local community sector groups involved in drug and alcohol abuse programmes, special needs disability groups, female football development, unemployed and socially disadvantaged communities.”