In 2009, Aberdeen Football Club Heritage Trust inaugurated its tribute to Dons who perished in both World Wars. Each year since, the Trust has held a simple but moving ceremony to re-dedicate its memorial and pay tribute to the bravery and sacrifice of young men who perished hundreds of miles from their beloved Pittodrie. The 2012 event was held on 12 November. Images courtesy Alan Jamieson. 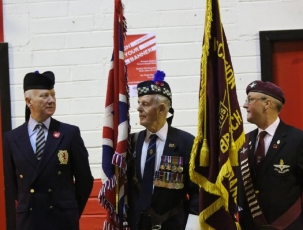 The ceremony was supported as ever by local regimental and charitable organisations and, for a second year, WO2 (Retd) Birkaji Gurung.

His comrades from the Gurkha Rifles and their families added a multi-cultural flavour to proceedings.

Trust Chairman Allan McKimmie talked of the special relationship Aberdeen’s Gurkha community has developed with the club, with six members of the city’s Nepalese community employed at Pittodrie. 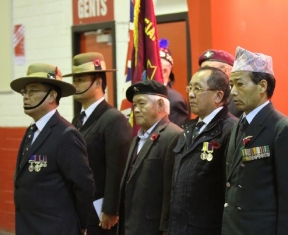 Members of the Trust reminded those gathered of the names and shockingly low ages of those who did not return from war, and contributed the Laurence Binyon Ode of Remembrance.

Birkaji Gurung read a message of remembrance in Nepalese.

Wreaths were laid on behalf of the local and national institutions which support the Trust’s Remembrance efforts and also help to organise the ceremony. 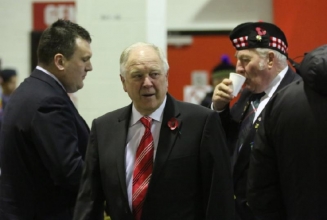 Dons manager Craig Brown paid his respects on behalf of the club by laying a wreath, and ex-Dons full back Ally Shewan did so representing the Former Players’ Association.
All are on permanent display in the concourse of the Richard Donald Stand.