The Iraq war was rubber-stamped despite the wishes of protesting millions; the justification that then Prime Minister Tony Blair used was a report. This report had been notoriously ‘sexed up’ to the extent that the Americans refused to endorse it. Blair aide, the foul-mouthed Alistair Campbell, was one of the main editors of this ‘dodgy dossier’.  Blair stood by its robustness. We all know better now. Suzanne Kelly examines the quality standards of the reports on which life-changing decisions are taken. 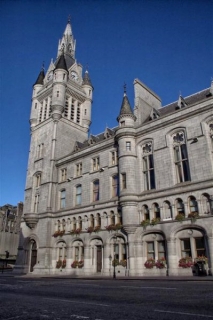 Closer to home, what kinds of reporting standards are we seeing? Very poor ones, I’m afraid.

A report prepared for Aberdeen FC’s stadium plans for Loirston included a lengthy commentary from MSP Brian Adam, who favoured the project.

Labour MSP Richard Baker’s comments against the stadium were excluded from this report, leaving it unbalanced. At the time, Kate Dean first insisted that Baker missed the deadline, but Baker proved otherwise. Dean later apologised, but by then, the hearing was long finished, and planning permission was granted.

PriceWaterhouse Cooper were hired as consultants for the City Gardens Project. They were paid out of public funds and Scottish Enterprise was involved in the invoicing arrangements.

PwC used a very small sample of business people in its research, yet somehow came to the conclusion that 6500 permanent new jobs would be created by the Granite Web and £122m would flow into Aberdeen every year until 2023, this also due to the Web. These figures were seized on by Vote for the City Gardens Project during the referendum and printed as if they were factual in VftCGP literature.

PwC did quite handsomely from the consultation (£41100 in March 2010, for example), and might well have gained further work from SE, the Aberdeen City Gardens Trust or other involved party, had the Web gone ahead.

When questioned as to the appropriateness of their projections being used in an advertising campaign during the referendum, PwC declined to comment, saying the work had been done for ‘a private client’ – despite the taxpayer picking up the bill.

Had the reports using these figures to justify the Web included further background on the statistics used, and details of the money already paid to PwC? For purposes of transparency and accuracy, one would hope so.
See:  PwC Invoices To Aberdeen Council

The report sealing the fate of Tullos Hill’s roe deer and many of its other former flora and fauna, was created by the City Council’s Peter Leonard, a senior civil servant in Housing, and by CJ Piper & Associates, an entity related to one Chris Piper, the man who stood to gain tens of thousands of pounds if Phase 2 of the Tree for Every Citizen scheme went ahead.

The report is riddled with bias, not least of which is the assertion that objections to the cull came from a ‘small but vociferous minority’. In reality, 2,500 people signed a petition handed to Aileen Malone, and three community councils representing tens of thousands of citizens, and animal charities including Animal Concern Advice Line and Scottish SPCA condemned the cull.

Piper made some £44000 from the tree scheme. Should the report have noted his obvious financial interest? Definitely.
See: Piper Report re. Tullos Hill: Page 48

It would be bad enough if this kind of bias was an isolated event; it is not. We recently saw a report concluding that elected councillors were treating the city’s administration in a ‘bullying’ manner. The report also claims that councillors don’t fully understand what the administration does.

It is wholly one-sided, despite its assertions to the contrary. If it had been thorough, it surely would have picked up on the many failings of the unelected senior administration, such as the dubious reports going out from their departments.

Councillors on committees will all tell you that they have to make their votes based on the reports before them – reports that are almost all prepared by the administration. Most of these reports are required to adhere to values which have all but lost their meaning. Reports have to relate to ‘vibrant and dynamic’ aspirations, have to prove the programme in question will deliver ‘value for money’, and so on.

From national ‘sexed up’ reports to those on local issues, information given to those who have to vote on their contents must  become more accurate and details of any consultants employed and those involved in preparation must be included in the contents.

At present, Aberdeen’s reporting system relies on a formula which is far from perfect.

For instance, we were promised that the Tree for Every Citizen scheme was ‘cost neutral’. Even when the primary report’s author Pete Leonard surely realised the scheme was not cost neutral (ie when the £43800 refund was demanded for the failure of Phase I and when no sponsors came forward to pay for  Phase 2 and its deer cull), no correction was publicly issued or sent to councillors on the Housing Committee.

The failures are mounting up.

Perhaps it is time for report writers to pay less heed to the existing report framework’s demands for rhetoric about ‘vibrancy’ and the like, and be required to ensure that all future reports include a form along these lines:

Until we can rely on the information in the reports going to our elected officials, and the impartiality of those involved in preparing them, we will continue to have a flawed system subject to abuse. It’s time for a ‘vibrant and dynamic’ overhaul of our city’s reporting standards – if not the country’s.

3 Responses to “Is Government Reporting Any Good?”