All good stories have an unexpected and dramatic twist to the tale and the thriller / horror / war story of Union Terrace Gardens is no exception. Mike Shepherd writes. 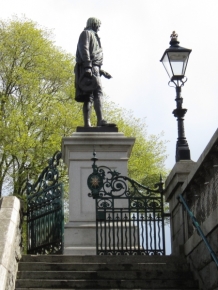 We left the saga with a public referendum having been held and a narrow majority gained for the City Garden Project.

The final count at the start of March saw glumness on both sides with nary a cheer heard; one side having lost the vote, bitter at the sledge-hammer tactics of their opponents; the other side staring at a pyrrhic victory whereby hundreds of thousands of pounds of advertising money had resulted in a narrow majority vote.

One campaigner described the result as like a football match where one side had fielded twenty players and still only won one-nil!

There was still two months to go until the council elections on May 3rd. The SNP had been privately hoping to see a  majority of councillors elected so that they could form an administration without any need to seek coalition partners. The political pundits thought this unlikely but still predicted the SNP to end up as the largest group in the council. It was conjectured that the public referendum would have some influence on the vote.

The SNP had been linked to the City Garden Project not the least through Alex Salmond’s comments in support of the project during the referendum campaign. The Labour party opposed the City Garden project and pledged to scrap it if they got the chance. The other main party, the Lib Dems, were split on the issue with three councillors, Martin Greig, Jennifer Stewart and Ian Yuill having opposed Sir Ian Wood’s scheme.

Kenny Watt had provided a website giving information detailing where the candidates standing for election stood with respect to the UTG issue. He had tried contacting as many of the candidates as possible. Some who I suspected to be pro City garden project were non-committal when asked.

In spite of the referendum result, candidate endorsement for the City Garden Project was somewhat subdued in the lead up to the election. Kenny’s website was widely distributed and intended as a voting guide only.

The Council vote was a surprise to many, not least the Labour party. They found themselves with the largest number of new councillors at seventeen, ahead of the SNP. This was not quite enough to form a majority (which is 22 in a council with 43 members). They did manage to secure the agreement of the Conservatives and Independents to form a coalition.

What happened? There is no doubt that local issues played a part; the proposed third Don crossing in Tillydrone and the new football stadium in Cove and Kincorth.
However, I believe the UTG controversy had a significant influence.

The Labour party saw their number of councillors increase substantially and all three Lib Dems supporting UTG were returned in spite of their party’s poor showing elsewhere.

I’ve had numerous comments from people who admit to having changed their normal voting pattern because they were so upset about what they saw as a very cynical campaign strategy by the City Garden supporters in the referendum. It looks as if the referendum result had an unexpected sting in its tail.

The Labour party, now leading the new council administration, are still committed to abandoning the City Garden Project. I make it a very slight majority of pro-UTG councillors in the new batch. Nevertheless, the political practicality is that Sir Ian Wood’s scheme is looking much less likely than it had been two months earlier.

There are several hurdles for the City Garden Project to get through before it happens, each one of which is a show-stopper if it doesn’t get the vote. The new administration has discussed organising what would essentially be a knock-out vote for the scheme. If it survives that, then there is the business case to be approved for TIF funding, the approval of a land lease and finally the planning submission itself; each separate votes. 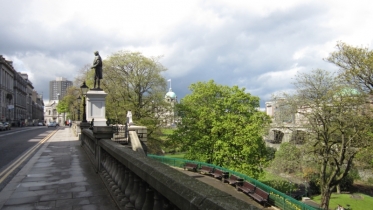 On top of that, there will be an intent by the new administration to get on with other business and I suspect they will not want to be distracted by such a divisive issue as the City Garden Project. There will be other priorities to consider.

That’s not to say that the beast is finally dead: By no means. The rich and powerful of the land are not giving up easily.

Sir Ian Wood intends to carry on regardless and will lobby councillors individually to pursue his project. The publicly funded ACSEF have rather unwisely criticised the Labour party position and the Chamber of Commerce are joining in.

Much will be made of the public referendum result, even though the result was marginal and the campaigning by one side was totally over the top.  Labour have the moral edge in that they never approved of the referendum in the first place, voting against it on the grounds that the ballot that counted was the one on May 3rd.

There will be more twists and turns to come in this saga no doubt. But at the moment, the prognosis for the City Garden Project is poor.  It is of note that the Labour party are already discussing what happens following the demise of the City Garden Project.  This includes the establishment of the Castlegate as a cultural centre and the possibility of instigating schemes similar to the contemporary arts centre proposed by Peacock Visual Arts over five years ago.

Local author Diane Morgan is busy writing a new book on the history of Union Terrace Gardens and hopes to finish it this summer. She has a problem. The final chapter hasn’t happened just yet.