Disillusioned and dissatisfied with the speed, quality and transparency (for lack of a better word), Suzanne Kelly sums up her dealings with Aberdeen City’s FOI officers. 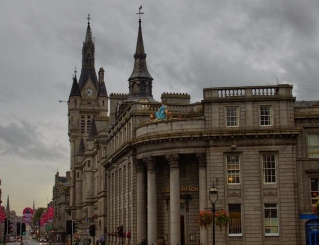 In 2007 I made my first Freedom of Information request to Aberdeen City Council.  This concerned travellers’ sites (the city had the brainstorm of telling travellers to go to the Torry  Battery – I pointed out that it was an Ancient Monument which the City was supposed to safeguard).

However, it seems as if FOI request handling is far from straightforward of late.

1.  How many deer were shot on Tullos Hill?

Initially the first figure of deer shot was 22.  This was later changed to 23.  The figures continue to change.  An email of 22 June 2012 from the FOI Office implies 33 shots were fired.  Yet this same reply came with a copy of a handwritten notebook, in which 35 deer were listed as  killed.

This hardly seems like accurate information management to me.

‘CJ Piper & Co.’ is an entity connected to the tree scheme and the cull.  This company co-wrote a report with ACC on the tree scheme – recommending the destruction of 22 deer this year.  ACC paid CJ Piper & Co. at least £44,000.  However, there is no ‘CJ Piper & Co’ listed with Companies House.  There may be very simple explanations for this.  Whatever the explanation, we are not likely to get details anytime soon.

The FOI officer advised me:

“ACC is unable to provide you with information on ‘C J Piper & Co’, including  whether or not this is a registered company, … as it is not held by ACC. “

Precisely how Aberdeen City can spend public money and make payments to a company without holding its details may be of interest to the Information Commissioner as well as Audit Scotland.   It must have been extremely difficult to write a report with this mysterious firm, but ACC managed it.

There is of course the assumption that Chris Piper (a known forestry expert) is the main force behind this company, but the public should have the right to know this company’s details and whether there are any other directors/shareholders.

Should someone being paid to plant trees be the same person who writes a report recommending deer should be slaughtered in order to plant trees when they stand to gain financially from the contents of the report? The relevant issues will be looked at in the next Aberdeen Voice.

3.  How much has the Tree for Every Citizen and deer cull cost?

I have received two spreadsheets under FOI legislation on this question.  The  latest spreadsheet was meant to show all the incoming and outgoing money on the deer cull and tree scheme.  But it raised more issues than it answered, including:

4.  Correspondence between ACC and the Scottish SPCA – Someone is hugely mistaken

A story in the Evening Express recently claime 2 deer were found dead ‘ahead’ of the cull (the story appeared in 2012; the deer died of unknown causes in…2010).   The ‘news’ item quoted heavily from a letter ACC sent to the Scottish SPCA.

I asked for copies of letters to and from ACC and the Scottish SPCA (which told me there were a handful of letters on the Tullos topic).

“… ACC holds a high volume of correspondence with the SSPCA relating to Tullos Hill. As such, it has proven to be quite difficult in identifying the particular letter to which you refer.  … it [FOI office]  is not aware of ACC supplying a copy of any letter to the Evening Express.”

So, not only do the City’s FOI people contradict the Scottish SPCA over the quantity of correspondence, but the ACC FOI office also cannot find a letter from ACC to the Scottish SPCA, quoted heavily in a news story (a copy of which I sent with my request).

At this point I can be forgiven for asking whether there is an political pressure at work on the FOI team concerning the cull.

5.  Q:  ‘Who or which agency performed site clearing work at Tullos?’

My question could not have been more straightforward; I asked ‘who or which agency’ performed site clearing work at Tullos (work which was worth apparently £480 per week).  The answer I first got smacked of sarcasm:  ‘a private contractor’.   Somehow, I had already managed to deduce that myself.   Sarcasm is fine in creative writing, but I question its place in a FOI response.

“…the name of the company / companies involved should be specified.  This should please include their Company Registration Number by which they are listed in Companies House – if not listed, then please specify”

“ACC is unable to provide you with the name of the private contractor (a sole trader).  ACC considers this information to be excepted under Regulation 11(2) and Regulation 10(5)(f) of the EIRS.  Please refer to the attached exception notices”

Perhaps they should have just said they were refusing to answer the question in the first place.   I am not completely certain that a sole trader should be called ‘CJ Piper AND COMPANY’, either.

Private entity  or not, the person/company was paid with public money, and we should know who is connected with it, how it was appointed, and what other work it has done.

6.  Is the use of a present tense verb reason enough to deny that a debt existed?

Rumour reached me that the failure of the first planting had cost the taxpayer about £44,000.  I asked the FOI office:

“Is it true that Aberdeen City Council owes a sum for previous, failed planting? “

“No money is owed by Aberdeen City Council to any agency or organisation for the previous planting.”

In the first place, it certainly has every relevance to the phase 2 tree planting.  In the second, my question did not say anything about phase 2 – just a ‘previous failed planting’.

The FOI people also defended their answer, writing  that since the debt had been paid, it no longer existed – and therefore they considered my question was not relevant.  The debt was paid in March; I asked my question in May.

I asked a ‘non-factual’ question, and wondered how the FOI office would cope.   I did get an interesting reply.

“ Why is the ‘a tree for every citizen’ project something that must be adhered to so precisely?”

“Elected members made a commitment in their Vibrant Dynamic and Forward Looking statement … to plant a tree for every citizen to support the ongoing development and improvement of the quality and quantity of public open space in the City.  Officers have been challenged to deliver this commitment.

“Aberdeen has a relatively small area of woodland cover (8.8%) as a percentage of its total area.  ….   Woodland recognised to offer a range of benefits for human well-being, creating a pleasant environment for people to live and work in, as well as being of great biodiversity value.

“Creating these woodlands … will deliver on all these points, with the additional benefit of being created at no cost to the City Council due to the levels of external funding being obtained to deliver the project.  This demonstrates that the Tree for Every Citizen is not taking resources from other services within the City.”

I have to wonder how this answers ‘why’ we must adhere precisely to a scheme which condemned the existing meadowland ecological system.  is the above answer a factual, quantifiable piece of information – or is it political waffle?  The FOI did not attribute their answer.

8.  Marischal College – on time and under budget?  Where’s the proof?

Back when the idea of gutting Marischal College to create offices (too small for the  Council’s needs) first emerged, people were telling me that the costings for alternative projects had been done very hastily and all alternatives were dropped quickly in favour of the Marischal plan.

My FOI ENQ 7172 uncovered that ACC spent £20K on consultants to look at the Marischal project.  However while I found out that costings on alternatives were done, I can’t see them .

“What were the costings done on the alternatives to Marischal College development?”

“ACC are of the opinion that… because the Copyright and Patents Act 1988 forbids Aberdeen City Council from copying the cost analysis on the Marischal Project without the owners consent. … ACC is not obliged under the terms of the FOISA to provide you with the information requested. “

How can ACC have paid consultants to look at costings – and the taxpayer not be allowed to know what the results are because of ‘copyright’ ?  Certainly copyright is meant to stop people profiting from the writings of other people, not to prevent the public finding out how its money could have been spent.

I haven’t counted up how many emails I received from the FOI office apologising for lateness in replying to me (all FOIs are meant to be answered within a certain time frame).  Let’s suffice it to say at least 50% of my requests are answered late.

There is also the matter of a judgment from the Information Commissioner against Aberdeen.  A FOI request concerning Stewart Milne group companies of mine went largely unanswered by the Council, which said the law was against the information coming out.  The information Commissioner had a different take, and eventually  five  errors were identified in how ACC FOI staff handled my questions were identified.

If we want FOI responses  to be accurate, swiftly delivered and comprehensive, then this department needs immediate overhauling.  I will be asking Councillors and the Information  Commissioner  to investigate further.