Another wonderful week has flown by in Aberdeen, and at this time of year, additional spookiness is in the air. By Suzanne Kelly. 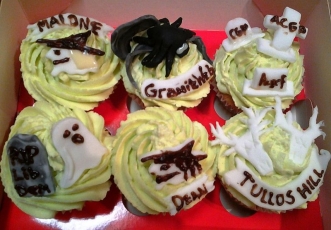 A Sweet Lily Adams cupcakes decorating session produced these holiday favourites; I hope you like.

Old Susannah also had a delicious dinner at La Stella.

Sadly I missed Wildly Unprepared’s Halloween evening at the Belmont, but I’m told it was a scream.

BrewDog launched this year’s ‘Movember’ charity event in aid of combatting men’s illnesses. Please support them if you can, just drop in to find out how. And thanks to Graeme Milne for giving us his Victoria Road ghost story as well.

Perhaps next time Aberdeen has a referendum, we should call on their services.

I am worried about  ACSEF – if they are keeping their minutes up to date (and they would of course) then they’ve not done anything since 19 June – some four and a half months. I for one am happy to keep paying tens of thousands of pounds to keep them going, meetings or no meetings. However, there is not much time left for them to get in the required two further full meetings before year end.

The elapsed time since 19 June is a lot of time for our best business brains to be thinking of new schemes. Could this coven be concocting anything even more hideous than the granite web?  Be afraid, be very afraid. Back in June, they had this to say:-

“Rita Stephen outlined the progress being made in the development of the updated Economic Action Plan for Aberdeen City and Shire [must have been a short outline – OS]. The Plan has been given the title of “Building on Success” and not “Building on the Future” as stated in the report [An ACSEF report that is inaccurate – this is a first – OS].

“Discussions still ongoing with relevant leads as to the shaping of the actions within the Plan and also with Partners on the drafting of specific pieces of text [this sentence would be more of that ‘transparency we’ve heard so much about – OS].

“The structure of this Plan will follow the previous action plan format but will include more visuals/drawings/impressions etc [excellent – hope it’s the same team that did the granite web’s visuals – I liked the giant floating child in particular – OS]. “

Phew!  That’s a load off my mind. If they were planning to build on their future, I’d recommend they get a structural survey done first.  Besides, ‘Building on Success’ sounds much safer than building on their future, doesn’t it? I reckon they have slightly more success than they do future. Then again, if they’re going to build on their success, at least they’re planning something not as grand as the granite web, theatre and bosque.

But be warned. If they’re going to build on their success, what form might that take?  I kind of think ‘building on your common good land and seizing it by means of a private trust’ would be an apt name; perhaps I’ll suggest it.

Yes,  Halloween was Wednesday; many an oddly costumed character has been seen prowling the streets. Grotesque neeps with faces marked with pain, greed and/or anger are rife at this time of year, mostly in Marischal College or the Town House.

Did you know Marischal College has a ghost? Its corridors are said to be haunted by a wild-eyed, frightening  spirit of a woman who once briefly worked  in the building.  She is thought to still haunt the area, hoping one day to return.

A few weeks before Halloween, a very small group of people believed they saw her, this time in front of Marischal. The group was very small indeed  (I’m told it was some kind of mini protest), so there is no way to corroborate that particular sighting, which unusually happened during the day. However, there have been no further sightings of  ‘The Woman in Leggings’ since that time.

Perhaps her spirit will fade away over time, as occasionally happens in the spirit world.

Time for a seasonal look at some scary movies.

This black and white movie from the same director who gave us ‘West Side Story’ still has the power to send shivers up your spine. ‘A lame remake with Catherine Zeta Jones can’t hold a ghostly candle to this original.

In it, a team of alleged professionals set off inside a haunted gothic-style house called Marischal College. Their experiments prove costly, particularly on one member of the team who really isn’t the full shilling; she is later forced to depart.  The townspeople ‘don’t come nearer than town, no one will come any nearer than that’ afraid of the horror that lurks within. You never really see a ghost, or for that matter all the £60 million that was sunk into the old college – but the plumbing acts up for no reason mysteriously.

A mad, wealthy, unbalanced power hungry madman rules his small hamlet from his lofty castle called Triple Kirks, but still needs more power and money.  He orders his lackeys to assemble the lifeless parts which will be turned into a monster to do his bidding, which he calls ‘ACSEF’.

ACSEF starts humbly enough, doing as its master wishes, but once reaching full power, it begins to run amok, and causes devastation on the town, called ‘Aberdeen.’ While some of the assembled business and public sector parts which are welded into the monster have come from good, the brain was that of a dangerous madman, and it is the brain driving the creature to violence.

The creature does briefly call for our sympathy, it is created by all of society to some degree. However, when its path of destruction proves too much, it must be destroyed, and the townspeople rally. Killing the beast proves difficult, and it does come back in several sequel films. But it is always ultimately destroyed by the power of good.

A family move to a new housing development, which has been built on former greenbelt land. The real estate developer is all smiles as the family moves into its new suburban, urban sprawl neighbourhood. But things are not as they seem. The electrics don’t work too well.

Funny substances start oozing out of the walls, and the chimney catches fire. The toilets aren’t hooked up properly. In one particularly horrific scene, more than eight people are in the kitchen at one time, and the floor promptly collapses. Not for the faint-hearted, or for those who like to have parties in the kitchen.

An architect or perhaps home builder is trapped in a time loop for his past sins such as trying to cheat a city out of money in a land deal. He keeps reliving an evening all over again, where people tell ghastly stories for hours. It is indeed a full council meeting.

One story he is forced to endure concerns a ventriloquist and his youthful dummy. The ventriloquist pulls the strings and works the little puppet, but things slowly go mysteriously wrong. The puppet, which of course should do exactly as the ventriloquist wishes, starts to speak for itself, with  some embarrassing consequences for its master. This happens at a BBC debate about a garden.

Eventually the dummy’s antics help to undo his puppet master, who winds up a complete wreck. Was the ventriloquist actually someone with two personalities – one a generous benefactor doing charitable works, and the other a tax-shirking, land-grabbing robber baron? It is up to the viewer to decide.

The Malone Witch Project: A film in which a single-minded, arrogant woman sets out on a vanity project and winds up getting herself and her two misguided pals (played by Leonard and Tallboys) lost in a very hostile environment.

Her initial contempt for the townspeople she briefly speaks to at the beginning of the film comes back to haunt her. In their foolishness they wind up bickering about pointless things, ignoring the dangerous peril their careers and the Lib Dems are in.

In the end, the woods are desecrated; gorse is ploughed up and underneath lies pollution, rock, but no soil. In the end, the innocent are slaughtered. A harrowing  film to which Old Susannah is pleased to report there will be no sequel.

Next week:  who knows?  Happy Halloween!