From the opening chapter of his book – Asi Es La Vida – which is now available from Pegasus Publishing, Andy Ruck provides Aberdeen Voice with a first-hand account of the Evening Express-reported ascent of Marischal College in 2004 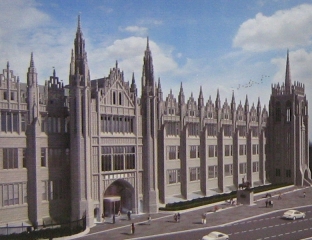 ‘PUZZLED’ : this was the headline of the Aberdeen Evening Express on the fifth of November in 2004.

The article was accompanied by a photograph of a traffic cone placed on one of the outer spires of Marischal College, the imposing, grey-stoned, 15th-century medical school in the centre of the Granite City.

Marischal College is the second largest granite building in the world, second to the great royal palace of El Escorial in Spain. It also reportedly holds the less enviable title of being Adolf Hitler’s favourite building, stemming from his days as a student of architecture in Vienna.

However, the proud exterior of the only partially-used college now hides a catacomb of dusty, abandoned classrooms and lecture theatres, linked by grand passageways and staircases, eerie in their dilapidation.

The traffic cone stood eighty two feet above the busy Broad Street on one of the college’s subsidiary towers, satellites to the imposing Mitchell Tower which rises in cold, granite austerity from the centre of the College.

“Either a professional mountaineer, a drunk, or a combination of the two”, reasoned the Evening Express.
For anyone who remembers, that was us. Or rather, it was my friend Carson Aiken, and I was his accomplice. Twelve hours earlier, on a blustery November night, we had been giving high-fives, running across the roofs and, laughing like hyenas, ringing the giant, ancient bell on top of the college to let the world know of our daring feat. The cockiness of it was incredible.

We were 19 and 20 and the world was ours to mess around with. Professional mountaineers? Not quite. Obsessive, fearless, student mountaineers would have been more accurate. Drunk? On this occasion, surprisingly not….”