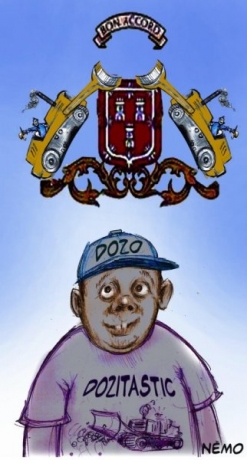 A local group of people with a shared enthusiasm for earth moving equipment has forwarded a proposal to Aberdeen City Council that the city coat of arms be replaced with a version more reflective of the bright future ahead for Aberdeen City and Shire.

Ground Up was formed in early 2010 by individuals from all over the Northeast who recognised the rise in profile, almost to iconic status, of all vehicles associated with the construction industry.

“There’s nithin’ lik’ a great muckle construction site though. Tae see a’ the JCBs, the dozers, dumpers, larries an’ crans shiftin’ san’ an’ stanes in sic a co-ordinatit an’ efficient wye is jist smashin’. It aften tak’s the hicht o’ believin’ they’ve a mannie inside makkin them gin aboot. Jist magic, min”

When questioned on the controversy over the social and environmental impact of particular construction projects, Mr Hall was quick to point out that Ground Up has no interest in the politics of planning.

Ah think ther affa bonny like. Foo an’ivver, we div aye listen tae the fowk o’ the toon, and we hiv tae gie them a say

A spokesman for Aberdeen City Council confirmed that the proposed new coat of arms, featuring a manned bulldozer on either side of the familiar shield, was currently under consideration, but adoption of the design would be subject to lengthy public consultation. Cllr. Billy Auld commented:

A prominent manager of an undisclosed contruction company and chairman of an undisclosed Scottish Premier League football club was reported to be unwilling to comment on his alleged membership of Ground Up and rumours that he has accepted £400,000 from Aberdeen City Council for two JCBs to flank the entrance of their new HQ at Marischal College