Ever wonder how a city council of one of the most prosperous regions of Britain contrived to find itself £55 million in debt in 2007? Aberdeen Voice – courtesy of its home made time machine fearlessly delves into the newspapers of the past/future and brings you those stories that never quite made the front pages.

Amidst an outcry from distressed Aberdeen Citizens Lord Provost Erasmus Stephen defended the council’s decision of spending the annual Pauper’s Fund on a Banquet for Bonnie Prince Charlie and his court. Lord Provost Stephen said that the money was well spent as His Royal Highness’s army would undoubtedly defeat the government forces during tomorrow’s battle at Culloden and that the prince’s gratitude would ensure that the city would be Scotland’s main port for trade with the continent.

Replying to those critics who pointed out that the Duke of Cumberland’s forces had the Jacobite army out numbered two to one and that the Prince had all the tactical awareness of a brain damaged tadpole, the Provost said that he would have actually backed Cumberland’s army but he ‘was afraid that people would laugh at him’.

Lord Provost Bampfylde Stephen assured Aberdeen citizens that cash spent in acquiring the Bastille in Paris as a hotel in the city centre is money well spent and pointed out that the fortress is in good repair, is on a major trade route and ‘is very handy for the shops’. He said the council expects a large return on their investment next year when crowds will be flocking into Paris for popular monarch Louis XVI’s jubilee. 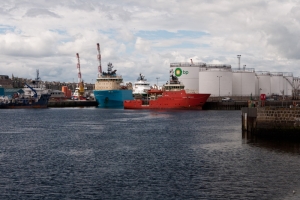 Provost Diggory Stephen says future of wooden ships are the way to go and dismisses hare brained schemes for iron ships. Council passed motion of censure on local shipbuilders AJ Hall and J Lewis for being led astray by crackpot inventors like Isambard Kingdom Brunel and derided the ludicrous notion that iron ships can float on water.

The city council, fresh from their Yuletide festivities, were involved in an unseemly disturbance this morning as hundreds of outraged citizens objected to the 1880 Fund for Widows and Orphans being invested in the North British Railway Company. Lord Provost Siegfried Stephen, however, dismissed the complaint saying that there were only a few troublemaking protestors and that the money invested was as safe as Sir Thomas Bouch’s railway bridge over the Tay – recently built for the North British Railway Company.

Council leader says ‘Happy days are here again’ as investing of entire Social Welfare Fund floats huge share portfolio on Wall Street. Lord Provost Rufus T. Firefly Stephen lit a huge cigar as he told assembled journalists this morning that the city’s financial future was assured now that Aberdeen’s wealth was there up on the big board on Wall Street. He dismissed complaints from impoverished citizens as being  the work of a few disgruntled Bolsheviks and malcontents.

Aberdeen’s Provost Hiram J Stephen yesterday dismissed the notion of the city becoming a centre for the oil industry in the North Sea and assured citizens that rumours of large oil finds off the Scottish coast were ‘just so much moonshine’.

In addition, he congratulated the council on its perspicacious decision to invest the Community Welfare Budget on potato recycling. ‘There are vast deposits of tatties in the Grampian Region just waiting to be turned into fossil fuels’ he said.

Aberdeen Provost, head honcho and big enchilada, John Moonchild Fifi Trixibelle Stephen III and his ruling junta gave a collective sigh of relief as he announced that the apparently doomed city had saved by a last minute financial deal. To the angry and increasingly desperate crowds outside the Town House he declared that despite the concreting over of Union Terrace Gardens, the Duthie Park, and the construction of a golf course on the site of Aberdeen Royal Infirmary, visitors to the Granite City just hadn’t appeared in the hoped for numbers. Consequently the city had been on the edge of total bankruptcy with only twenty thousand pounds left in the kitty. Fortunately, however, he had that very morning received an e-mail from a multi-millionaire in Nigeria who wished to clear all his vast funds through a bank in the UK and only needed all of the city’s bank details whereupon which he would immediately send the city fifty percent of his account. Provost Stephen stated that our future was therefore assured…..