Alex Mitchell brings us the final part of his fascinating and informative series of articles on the development of Aberdeen City from its origin as two separate burghs.

Aberdeen was perhaps at its most important, relative to the rest of the world, and as a centre of trade and learning, in the early decades of the 17th century.  The population of the two burghs approached 10,000 in the 1630s; about 8,500 in New Aberdeen and 1,000 in Old Aberdeen. 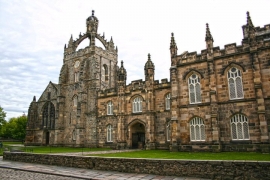 The Burgh maintained close links with the seaports of the Hanseatic League, of which Aberdeen was an early member, and their hinterlands of the Low Countries, Poland, Russia, the Baltic states and Scandinavia.  Aberdeen was more open to European influences, to new ideas from the Continent, and was more diverse in its political and religious thinking, than were either Edinburgh or Glasgow.

Aberdeen (Old & New) now had its two small universities and there was hardly a European university of note that did not have an Aberdonian professor.  George Keith, the 5th Earl Marischal, had set up a new college in 1593, being Marischal College, on the site of the old Franciscan Priory, to teach a Reformed (Protestant) curriculum in rivalry to King’s College, (originally St. Mary’s College), which had been established by Pope Alexander VI (Borgia) in 1495 at the request of Bishop William Elphinstone (1431-1514).

This reflected the post-Reformation decline in the standing of the Catholic Gordons of Huntly, the de facto protectors of the two Burghs and the real power behind the Menzies dynasty, and, correspondingly, the growing power and influence of the Protestant Keiths, the Earls Marischal, with their power-base at Dunnottar Castle; George Keith had been promoted to Lieutenant of the North by King James VI in 1593.  But it was not until 1860 that the two universities of King’s College and Marischal College were united into the single University of Aberdeen.  Through King’s College, Aberdeen can claim to have the fifth-oldest university in all of Great Britain.

The Reformation had not been welcomed in the North-East, where, as late as the 1620s, the majority of gentry families led by the Gordons of Huntly and their close allies the Hays of Erroll, remained Catholics “in their hearts”.  In Aberdeen itself, this was reflected in the succession of Menzies provosts.

Even as their Gordon overlords slowly weakened, so, perversely, the Menzies family tightened its grip, although their policy on religious matters might best be described as pragmatic; Aberdeen was regarded as a centre of Episcopalianism rather than of either unrepentant Catholicism or radical Presbyterianism.

By May 1638, Aberdeen was the only royal burgh still refusing, on the basis of loyalty to the King, to subscribe to the National Covenant, drawn up in Edinburgh earlier that year; but opinion amongst the townsfolk reflected the wider divisions within Scotland, between the largely Covenanting Lowlands and the Catholic and Royalist Highlands.  Aberdeen was on the fringe of both territories and was too big a prize to be overlooked.

The outbreak of civil war between Covenanters and Royalists in 1639 was followed by a succession of invasions, occupations and lootings of the two Burghs by the rival armies, climaxing in 1644 in the three-days-long massacre of the unarmed and defenceless citizens of Aberdeen known as the Battle of Justice Mills, perpetrated by the Irish (Royalist) forces of the Marquis of Montrose.  On a number of occasions the town became the battleground for the Royalists and Covenanters.  About one-tenth of the population of Aberdeen died in these conflicts; another quarter died in the last but worst-ever outbreak of the bubonic plague in 1647, despite the desperate measures taken to exclude and contain it.

The Marquis of Montrose was executed in Edinburgh in May 1650.  One of his hands was sent to Aberdeen and was nailed to the front door of the Tolbooth.  It remained there until July, when King Charles II, on his way to his Scottish Coronation at Scone and briefly in residence at Pitfodel’s Lodging, just across the Castlegate, observed the blackened and decaying object and ordered its Christian burial.

Scotland was effectively put under military occupation during the nine years of Oliver Cromwell’s British Commonwealth.  General Monck’s troops arrived in Aberdeen in Sept. 1651, built their new fort on the Castle Hill, and did not leave until 1659.  The destruction during the Covenanting Wars contributed to a decline in Aberdeen’s commercial importance.  Aberdeen had accounted for 8% of all burghal tax revenues in 1635, but for only 4.5% by 1697.  The city was badly affected by the widespread famines of 1695 and 1699; the population fell from about 7,100 in 1695 to 5,600 in 1700.  It more than recovered by the mid-18th century, being estimated as 15,433 in 1755 and rising to 26,992 by the first census in 1801.

As elsewhere in Scotland, it was the rural hinterland that was worst affected by the ‘Lean Years’ of the 1690s, mainly because of the lack of overland transport and functioning markets via which food could be imported, compounded by the lack of any saleable product that could be traded for food.  In Aberdeenshire, population in 1755 had still not regained its 1695 level.  These grim circumstances at the close of the 17th century prompted the belief that Scotland could never be economically self-sufficient and had to obtain access to English markets.  Thus the Union of Crowns in 1603 was followed by the Union of Parliaments in 1707.

Aberdeen’s relative decline in economic importance continued through the 18th and 19th centuries, mainly because Britain’s expanding trade with the Americas favoured west-coast ports like Glasgow rather than east-coast ports like Aberdeen, Dundee and Leith; also because of the Burgh’s geographical remoteness from the basic resources of the Industrial Revolution, being coal and iron ore. 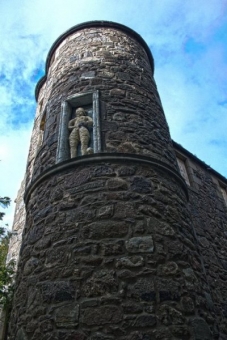 The ‘Wallace Tower’ in Netherkirkgate which set me off on these researches, as it turns out, had nothing to do with the Scottish patriot William Wallace (1272-1305)  since it was not built until 1588.  It was properly known as Benholm’s Lodging, being originally the residence of Sir Robert Keith of Benholm, the younger brother of the 5th Earl Marischal, and stood just outside the old Netherkirkgate Port – demolished about 1770 – at the corner of Netherkirkgate and Carnegie’s Brae; about where the M&S Food Hall is now.

Carnegie’s Brae led down to the Green via Putachieside, so-named because the proprietor of Castle Forbes, then known as Putachie, had his town house there; it was latterly a particularly miserable street of slum tenements and was obliterated by the construction of Union St., and then of Market St. and Archibald Simpson’s New Market in 1840.

Benholm’s Lodging was a unique example of a Z-plan tower-house within a Scots town, and was one of only four 16th century buildings remaining in Aberdeen.  It was demolished in 1964, along with part of the Netherkirkgate to make way for the extended M&S store, and it is unlikely that I ever actually saw it.  A replica building, incorporating some of the original stonework and features was erected in far-off Tillydrone in the same year.  This building is now empty, redundant, neglected and vandalised.

The useful suggestion has been made that it should now be moved back to its original location in the heart of Aberdeen, or at least on to our projected ‘Civic Square’ where it would complement Provost Skene’s House, also of the time of Mary Queen of Scots and King James VI.

Footnote. Aberdeen Voice is grateful to Stanley Wright for all photos associated with the above article.