Alex Mitchell continues his historical account of the Old Burghs of Aberdeen, and of macabre practices and dangerous times. 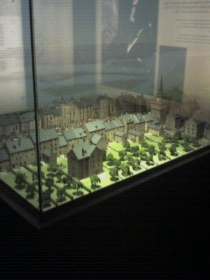 From the end of the 16th century until 1776 there was a gibbet on Gallows Hill, which overlooked the Links and, from the early 20th century, the Pittodrie Stadium, hence its later description as ‘Miser’s Hillie’ – it afforded a free view of the football matches.

It was approached from the Tolbooth or Castlegate via the Justice Port, or Thieves’ Port, now Justice Street, on which the heads and dismembered limbs of executed criminals were displayed. Otherwise, the bodies of criminals were covered in tar and left hanging in chains or in a kind of cage for years and decades, to discourage persons of similarly malign intent.

Gibbets were strategically placed on the main routes into the town for the same reason – there was one at the Brig o’ Dee, for the benefit of those approaching the Burgh from the south.

Macabre as this may seem, the fact was that the medieval Burgh lived under a constant threat of attack by the Celtic warlords of its rural hinterland, such as the infamous Wolf of Badenoch, Alexander Stewart (1343-1405), who destroyed the towns of Elgin and Forres and burnt down Elgin Cathedral in 1390; also the rapacious Highlanders further beyond, to whom Lowland burghs like Elgin and Aberdeen represented wealth beyond the dreams of avarice.

The citizens of Aberdeen were never Gaelic-speakers. (If they had been, Aberdeen might now be called Inverdeen.)

The citizens of the Burgh therefore had to maintain a high degree of alertness, watchfulness and military capability, as was evidenced by the Battle of Harlaw on 24th July 1411, which may be viewed as a decisive struggle between the Gaelic-speaking Highlanders and the Scots-speaking Lowlanders.

The citizens of Aberdeen were never Gaelic-speakers. (If they had been, Aberdeen might now be called Inverdeen.) They spoke Lowland Scots, albeit with a notably shrill intonation and an extensive vernacular vocabulary. Lowland Scots was a version of the Germanic language of the Anglo-Saxon Kingdom of Northumbria, which for about 500 years extended from the Humber estuary to the Forth estuary, or from Hull to Edinburgh and beyond, from the 6th to the 11th centuries. Before this time, the Pictish people of N-E Scotland would have spoken a Celtic language best described as an early form of Welsh, hence the place-name ‘Aberdeen’. There are many place-names beginning with Aber- in Wales, none at all in Ireland.

The Northumbrian or Anglo-Saxon language developed into ‘Inglis’ (English) and ‘Scottis’ (Lowland Scots) variants, which were distinct but mutually comprehensible. ‘Scottis’, or Lowland Scots came to be regarded as the authentic language of the people of Scotland. The real, Gaelic-speaking Scots, the Highlanders of the north and west, came to be referred to as ‘the Irish’ and their language, incomprehensible to Lowlanders, as ‘Irish’ or ‘Erse’. But the Lowland Scots dialect itself began to lose ground as a literary language from the 15th century, although it remained the spoken language of the common people. The advent of the King James Bible in 1611 served to standardise its version of written and spoken English in both England and Scotland.

The invaders were eventually forced to withdraw, after one of the bloodiest battles in all the bloody history of Scotland.

A Welsh version of the Bible was produced fairly early on, but Scots and Gaelic versions did not appear until much later, for the simple reason that there was insufficient demand; the Lowland Scots could read English easily enough, and there weren’t enough monoglot Gaelic-speakers to constitute a worthwhile market.

Thus in 1411, Donald, Lord of the Isles, led a force of Highlanders and Islanders eastwards, ostensibly so as to seize the Earldom of Ross, which he claimed in the name of his wife; but he was almost certainly at least as interested in sacking and plundering the Burgh of Aberdeen. That is certainly how the citizens of Aberdeen saw it. They marched out to do battle under the command of Alexander Stewart, son of the infamous Wolf of Badenoch, who had contrived to become Earl of Mar. At Harlaw, near Inverurie, the Highlanders were opposed by the fighting men of the north-east – the Irvines, Leslies, Keiths and Forbeses, plus Provost Davidson, the burgesses and men of Aberdeen. The invaders were eventually forced to withdraw, after one of the bloodiest battles in all the bloody history of Scotland. Provost Davidson was carried home on his shield to be buried in the Mither Kirk of St. Nicholas.