Last week in Aberdeen Voice, Alex Mitchell brought us a history of Aberdeen from its recognition by the Romans as a settlement, through its development as two separate burghs, the influence of the burgesses and the benevolence of Robert the Bruce. Part 2 of The Old Burghs of Aberdeen continues. 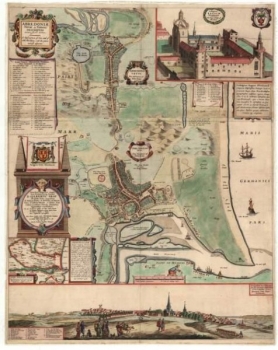 A Mint was established by the end of the 12th century, most likely at Exchequer Row, which issued coinage in the forms of sterlings, groats and half-groats until the reign of James IV (1473-1513). A weekly Sunday market had been established in 1222 and an annual fair in 1273. The local economy was based on fishing and the processing of wool and leather. Aberdonian merchants travelled to England and the Low Countries, trading fish, wool and hides for wines, spices and other luxuries; similarly, they sailed to the Baltic for flax, timber, iron and grain.

Aberdeen was an early member of the Hanseatic League, along with such other northern-European seaports as Bruges, Lubeck, Danzig, Riga and Novgorod. Until the Union of the Crowns in 1603, England was more-or-less closed to Scotsmen.

The magnet for Scots seeking to earn a living in foreign parts was Poland, then a much larger country than now. Aberdonian merchants had well-established connections with its main seaport of Danzig, now Gdansk. One such merchant was Robert Gordon (1668-1731), the founder of Robert Gordon’s College; another was William Forbes, known as ‘Danzig Wullie’, who went on to build Craigievar Castle.

Our notions of the older Aberdeen are based on the map drawn by Parson James Gordon of Rothiemay in 1661. The town had been much the same for the three centuries before 1661, and did not change much until the beginning of the 19th century. Parson Gordon observed that ‘the most considerable part of the city stands on three hills: the Castle Hill, St. Katherine’s Hill and the Gallowgate Hill’. Aberdeen in 1661 had a population of only about 5,000, and consisted of about sixteen streets, most of which had long back gardens which covered more ground than did the streets and houses themselves. As the population expanded, these gardens were themselves built on, resulting in considerable congestion and squalor, and were accessed by courts, pends and closes cut through the original house, e.g., Peacock’s Court in the Castlegate.

There were regular outbreaks of plague, cholera, typhus, amoebic dysentery, smallpox, tuberculosis and leprosy. A leper hospital, first mentioned in 1363, was set up outside the Burgh on Spital Hill but was in ruins by 1661. A town ‘scaffyngir’ (hence ‘scaffie’) was appointed in 1494, financed by a tax of 1d on each house or merchant’s booth or stall. 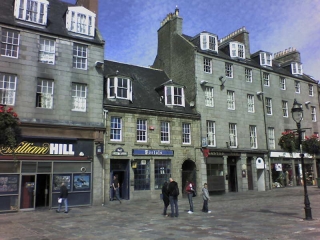 the Burgh’s main source of fresh water; it also supplied three of the Burgh’s many mills, such as that at Flourmill Brae. Evidently more water was being abstracted from the Loch than drained into it because Parson Gordon depicts it as ‘the Marsh formerly known as the Loch’. By 1800, the Loch had shrunk to about the area now covered by Loch St., and by 1838 it had disappeared completely. The area now known as the Lochlands became George St., Charlotte St., St. Andrew St. and John St.

In old Scots, ‘gate’ or ‘gait’ meant road. Thus the Castlegate, once known as the Marketgate, was the road to the Castle, perched on the Castle Hill. The Castle dated from about 1150. It is mentioned as being repaired in 1264 by Richard the Mason, the Burgh’s first Provost, amongst others. It surrendered to the English, under King Edward I, in 1296. But, in 1308, Robert the Bruce with the support of the citizens of Aberdeen finally ousted the English garrison. He razed the Castle to the ground to prevent its re-fortification by the enemy, and the Castle Hill itself was reduced in height. A chapel to St. Ninian was built there in the 14th century.

The aristocracy were beheaded, by sword or, later, by Aberdeen’s own patent guillotine, the Maiden, last used in 1615

Much later, the Castle Hill was re-fortified by Cromwell’s army, under General Monck, during their occupation of the town in the 1650s; they used stone purloined from the buttresses of St. Machar’s Cathedral and from the Bishop’s Palace in Old Aberdeen; this activity resulted in the collapse of the Cathedral’s central tower and spire in the gales of 1688. A military barracks was built within these Cromwellian fortifications in 1794 and was thereafter occupied by the Gordon Highlanders. A military hospital was built on the adjacent Heading Hill in 1799; a cast-iron bridge, perhaps like the present pedestrian bridge, linked the Barracks to the Hospital. Sometime before World War Two, the old barracks were turned into tenement housing and degenerated into slums. They were demolished in 1965 and replaced by the present twin blocks of flats. Part of the old surrounding wall of the Hanoverian barracks is still to be seen on the south-east side of the Castle Hill, just up from Castle Terrace.

Castle Hill and Heading Hill were places of judgement and execution, as during the witch-burning frenzy of 1590-7. The name ‘Heading Hill’ appears on old maps, but seems to have fallen into disuse. Open-air courts were held in the hollow between the two hills, now occupied by Commerce St., whilst executions and witch-burnings took place on the ‘Heidin’ Hill’. The other main place of execution was in front of the Tollbooth, latterly facing down Marischal St. Although the Tolbooth – known satirically as ‘The Mids o’ Mar’, meaning the heart of the province of Mar – was the town prison, it had only limited capacity, and it cost too much to keep convicts in prison for long. Convicted criminals were mostly executed. The aristocracy were beheaded, by sword or, later, by Aberdeen’s own patent guillotine, the Maiden, last used in 1615; the blade is on display in Provost 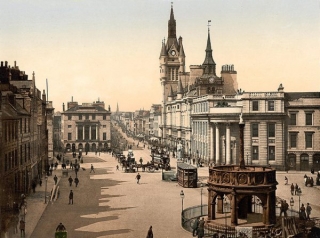 Skene’s House in the Guestrow. Common criminals were hanged. The Town Hangman was allocated a small, isolated house on what became known as Hangman’s Brae, which descended the Castle Hill to the present vicinity of Virginia St. and which presumably corresponded to the flight of steps to be seen there now. The office of Public Executioner was abolished in 1833 when the Council decided that it would be cheaper to hire such a person from somewhere else, as and when needed. In the event, the last public execution in Aberdeen took place in 1857.

The Gallowgate of the present-day would scarcely look out of place in a run-down steel-making town in some remote and insignificant province of the former USSR; the wrong end of Ukraine, perhaps.

Virginia St. was laid down in the mid-18th century on the reclaimed Shorelands, as were Commerce St., Sugarhouse Lane, Water Lane, Mearns St., James St. and the lower end of Marischal St. Until then, the waters of the harbour had extended to the foot of the Castlehill at high tide. The name of Virginia St. refers to the expanding trade with the Americas, as does that of nearby Sugarhouse Lane.

The Gallowgate, from Broadgate northwards, steeper and more winding than now, was the medieval route to the then place of execution on Gallowgate Hill, also known as Windmill Hill, later as the Port-Hill because it was near the Gallowgate Port, one of the six gates or ‘ports’ allowing entry to the medieval town. Aberdeen was built on seven hills, like Rome, and the Port-Hill was the highest of the seven. From the mid-18th century until as recently as 1960, this site was occupied by the huge Porthill Factory, originally manufacturing linen cloth. The name, but nothing else, continues in the blocks of flats known as Porthill Court, opposite Aberdeen College. The Gallowgate is an extraordinarily historic thoroughfare, once compared with the Royal Mile in Edinburgh; all kinds of interesting and important things happened there, but one would never know to look at it now. There seems almost to have been a systematic attempt by the authorities to obliterate all evidence of past settlement, industry, architecture, history and culture. The Gallowgate of the present-day would scarcely look out of place in a run-down steel-making town in some remote and insignificant province of the former USSR; the wrong end of Ukraine, perhaps.

No Responses to “The Old Burghs of Aberdeen – Part 2”