Much of the old toun was swept away in the major slum clearance programmes of the 1890s and 1930s. The Gallowgate, surmounted by the 15th century ‘Mar’s Castle’ – the town house of the Earl of Mar, demolished 1897 – was once compared with the Royal Mile in Edinburgh. 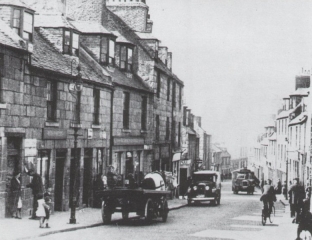 Surely something better could have been achieved than the charmless ‘Brutalist’ Gallowgate we see today? Of the reputedly haunted Guestrow (from Ghaist-Raw), the main remnant is the beautifully restored 16th century George Skene’s House, long known as Cumberland’s Lodging following its requisition by the infamous Duke of Cumberland on his way to Culloden Moor in 1746.

His troops were billeted in what is now Robert Gordon’s College, built 1739 to the design of William Adam, father of the Adam brothers, Robert and James, who are commemorated by the Adelphi Court, the name of which refers to dolphins – a classical symbol of brotherhood.

The Green is thought to be the oldest part of Aberdeen, perhaps properly ‘Green-gate’, meaning the road to the bleaching-greens the banks of the Den-burn; Aberdeen itself was perhaps originally ‘Aber-den’, given that seagoing vessels could come up the Den-burn as far as Patagonian Court.

King William The Lion (1165-1214) was said to have had a Palace on the Green, which he later presented to the Trinity Friars, hence the Trinity Monastery and Chapel, and now, presumably, the Trinity Centre. There was a Carmelite monastery on the south side of the Green, hence Carmelite St. and Lane.  Recent archaeological research suggests that the west end of the Green, close to the confluence of the Denburn and the River Dee, must have been marshy and waterlogged.

It is easy to forget that a full half-mile of Union Street, from the Adelphi to Diamond Street, is an artificial creation

The early or Dark Ages settlement must have been on the drier land at the east end of the Green, pressing up against the steep slope of St. Katherine’s Hill, looking eastwards to Shiprow and northwards up Putachieside to St. Nicholas Kirk. In such a confined space, any significant growth of population would soon have prompted a shift of activity and settlement to the higher and drier land of the Castlegate and Broadgate.

Even now, the streets and wynds around the Green are characterised by very high, narrow buildings, reflecting the tiny medieval plots into which the land was divided. The Castlegate was certainly the main street and market-place by 1290, being referred to, then, as a forum.

Nonetheless, for six centuries, the Green formed part of the only route into Aberdeen from the south. Visitors, both welcome and unwelcome, had to come over the Brig o’ Dee, up the Hardgate, down Windmill Brae, across the Den-burn and through the Green into the old toun. Then as now, the entry to the Green was narrow, but the street then widened out into a triangular shape. It branched off on the left hand into the wynd known as Putachieside and thence to the Netherkirkgate; whilst on the right hand, it led by way of Shiprow round the southern side of St. Katherine’s Hill to the Castlegate – the heart of the medieval Burgh.

Once Union Street and Holburn Street were laid down, the Green, Hardgate etc. et al ceased to be the main or only route to and from the south, and went into a decline. 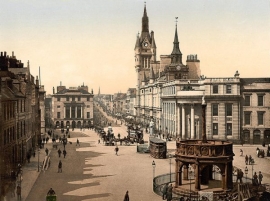 It is easy to forget that a full half-mile of Union Street, from the Adelphi to Diamond Street, is an artificial creation – a kind of flyover – superimposed on a series of arches vaulting the streets and wynds of the old toun, and at a height of between 20-50 ft. above the natural ground level, which slopes from St. Nicholas Kirkyard down to the Green and the harbour, as did many of the old streets.

Thus Correction Wynd and Carnegie’s Brae run under Union Street whilst  other old streets like St. Katherine’s Wynd or Back Wynd were truncated by it. At the Castlegate end,  Narrow Wynd and Rotten Row were obliterated altogether.

Narrow Wynd was more important than it sounds, and ran across the Castlegate to Shiprow. The famous Aberdeen Philosophical Society, the fons et origo of what became known as the Aberdeen branch of the Scottish ‘Common-Sense’ Philosophy and a major contributor to the ‘Aberdeen Enlightenment’, was founded by Dr. Thomas Reid and Dr. John Gregory, both of King’s College, and held its fortnightly meetings in a tavern in Narrow Wynd from 1758 to1773. The remnant of Narrow Wynd was demolished in 1867 to make way for the new Municipal Buildings or Town House.

The Upper- and Nether-Kirkgate were the roads ‘above’ and ‘below’ the Mither Kirk of St. Nicholas. The narrow street nowadays known as Back Wynd used to be called Westerkirkgate.

The Upperkirkgate Port was the last of the six medieval town gateways to be demolished, sometime after 1794. It stood near the foot of the Upperkirkgate, just beyond No. 42, the gable-ended 17th century house which is still to be seen there now.

The original six ports – solid walls pierced by gateways – had become an obstruction to the flow of traffic, having been in existence from the first half of the15th century.

The other five ports were: the Netherkirkgate Port, controlling movement around the north side of St. Katherine’s Hill; the Shiprow or Trinity Port, checking entry from the south side of St. Katherine’s Hill and the harbour; the Justice or Thieves’ Port to the north-east of the Castlegate, demolished 1787; the Futty Port on Futty Wynd, to the south-east of the Castlegate, and the Gallowgate Port on Port Hill, controlling movement from Old Aberdeen and the north.