There was jubilation in Aberdeen today after the SNP and Lib Dems were sensationally returned to power. Samuel Clemens writes. 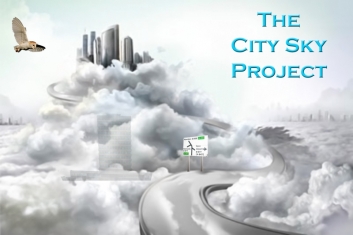 The March referendum result having trumped the local elections that followed it in May, the first act of the reinstated council will be to  overwhelmingly  approve the City Sky Project.
This ambitious plan by international tycoon Donald Duck and Axsef will raise the entire city to the roof level of St Nicholas House.

“Only 25,004 people voted for Labour in the elections, whereas 50.001% of voters voted for the City Sky Project in the referendum.

“Since Labour campaigned on a pro UTG ticket, it’s only democratic that they should be removed from power, made to empty their desks, have their phones confiscated, and be escorted from the city by Union Square Security Guards.”

“Labour had intended to demolish St Nicholas House and replace it with a garden. That scheme would have cost millions of pounds and only had 99% of its funding in place.

“Then Donald Duck came along and suggested raising the entire city to the roof level of St Nicholas House, as an elegant alternative to demolition. He even offered to fund the first £5m himself. A scam like this only comes along once in a lifetime, and we all felt it was a visionary concept that could really revitalise the city centre.

“As soon as this is imposed on the people of Aberdeen I’ll be relocating to Brighton, where I can lead an alternative lifestyle.”

International Tycoon Donald Duck has strong ties with the city because his German grandmother once owned a Scottish Terrier named Jock.

Well respected accountants Price-Whatnohouse-Kline-Beecham have eliminated the need to consult specialist construction surveyors by guesstimating the project at an affordable £500m. A spokesperson said:

“We are merely acting on the instructions of our client, Donald Duck. He calls the shots.”

The balance of the funding will be raised under the tested system of CIF, or Crony Increment Funding. Council protégé Callum McChild deftly explained the workings of this complex funding mechanism,

“Under this scheme the entire city will be leased to an unregistered charity vehicle named Axsef World Domination Fund Limited for a period of not less than 525 years.

“The cost of the development will be recouped by increased business rates in the two new towns that will be constructed within the CIF zone to the North of Aberdeen. These are to be named Peterhead and Fraserburgh.

“The increased business rates will be in effect for a period of 25 years.  Although it is a certainty that this will repay the loan, any remaining debt will then in theory be recouped by confiscating and auctioning the homes of everyone living in the city or its suburbs. But that part will never happen; never in all my six years as a teenager has something like that occurred.” 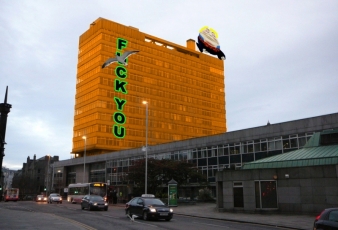 Lord Provost Humptress Dumptress, who represents the ward of Steven Wiggy Construction Limited, claimed that all her constituents were in favour of the project.

“Aberdeen would have been the laughing stock of the entire Universe had it rejected The City Sky Project. The alternative is that St Nicholas House is painted bright orange with F*CK YOU stencilled down the side of it and left to stand forever, and the Art Gallery will almost certainly fall down of its own accord.”

“THE CITY SKY PROJECT IS UGLY.  WHY REPLACE A CITY WITH A CITY?”

“There is an alternative.  I have plans drawn up to reopen St Nicholas House as a macrobiotic cafe.  As you can see from these drawings we’ve incorporated a giant spiral staircase around the exterior which we also plan to reupholster in tasteful crushed velvet.  There will be outdoor balconies every third floor with canopies to protect patrons from all the seagull shit.”

“Yeah, this is a great deal for you limeys, these guys turned a bunch of grass into some wild flowers and folks flocked to see it from all over the world.

“It was inspirational. Charles Rankturd is jetting in to have brunch with some students at Gray’s, because Zooey thought that would be a good photo op.”

Aberdeen Voice got a sneak peak at the plans and can confirm that everything, with the exception of St Nicholas House, will be demolished in order to prep the area. We then asked 100 people in the vicinity of Cornhill Hospital how they felt about seeing the entire city being reduced to rubble.

A representative of the Federation of Small Nutcases said,

“Our members are in favour of the project, and so is everyone else.”

“It is heartening to hear that not only will St Nicholas House be preserved, but that it will be reinforced to act as a symbolic supporting pillar for the revitalised city.”

Herr Flick, spokesman for Axsef, revealed how police had to be called in after annoying tree-hugging luddite NIMBY Occupy movement spin-off, Friends of Aberdeen kidnapped his family, stole his plasma television, barbecued his dog, scrawled the world “PIG” on his wall in blood, called him a w**ker online, and hurt his feelings.

Although clearly shaken he bravely explained, “The entire inside of the structure will be one enormous arts centre, capable of holding over one million people, designed in the theme of a shopping mall. Art and shopping are integral to one another.

“Our PR company conducted research that revealed art and shopping are two sides of the same coin. This vibrant fusion of them will create a cafe culture and determine our entire weather system for thousands of years to come. The city will benefit from hosting prestigious events like Fame Academy and The World Dwarf Throwing Championships.”

The Office for Spoilt Brat Future Prime Minister said in a statement that Spoilt Brat felt that Aberdeen was lacking in connectivity.

“To get from one side to the other you have to pass through the middle or go around.  Once the City Sky Project is completed it will also be possible to bungee jump over the side then ride an elevator back up.

“People will start to move around more exploring these sorts of tactile possibilities. It’s all about connectivity, that’s why vibrant cities like Disneyland and Alton Towers are such a commercial success.”

Councillor Josh Corblimey thought that this had the potential to be just like Space 1999,

“We could have robots and stuff, and everyone could eat that mashed potato stuff that you mix in the packet and microwave.  In fact everyone would have access to microwaves, and we could communicate with each other using them.

“Microwaves would be like phones, and we could all wear suits of tinfoil, fly around in jet-packs and make popcorn. Imagine if someone farted whilst flying their jet pack? It would be ace. But I see the need to make education our priority. Happy days!”

We dug up Ex-Aberdeen Manager Ally McGab who came close to winning the World Cup with Scotland in 1978. He commented:

“The people of Aberdeen need to think big, but remember it’s a game of two halves Archie.”

Celebrity Scottish President John West Salmon was craned into Aberdeen for five minutes where he gave the project his endorsement 110% while presiding over the public execution of unpopular crazed renegade Mike Sheepdog.

The people of Aberdeen have no choice but to welcome this ambitious scheme. The fact that the referendum was rigged is irrelevant, that’s all in the past, now we must move on with our lives and embrace the future. And the sky is the limit!