A mock funeral protest will take place this Saturday, 28 April, on Tullos Hill, timed to coincide with Aberdeen City Council’s tree-planting day. Campaigners want to raise awareness of the cull, damage to the existing meadow, and the absence of public support for City’s Tree for Every Citizen scheme. With thanks to Suzanne Kelly. 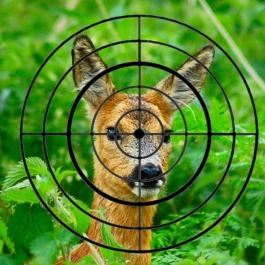 The contentious decision to plant a tree for every citizen with the majority of the phase 2 trees to be planted on Tullos Hill has caused thousands to sign petitions and four Aberdeen community councils to protest formally against the scheme.

Protestors want to keep the herd of deer and have the trees planted elsewhere. Pleas have been ignored and the Council says that new legislation means they have to cull the deer.

Opponents point out that the deer population moves from site to site in the area, and that other deer will simply move on to the hill. The SSPCA called the plans to kill deer to protect trees which don’t even exist yet, ‘abhorrent and absurd’.

Councillor Neil Cooney, a campaigner to keep the hill as meadowland said,

“My stance is a simple one – Tullos Hill is the wrong place for a mass planting. It could be a great meadow with stunning views across the city. My constituents have no stomach for a cull. A cull is only necessary if you drive through a daft tree-planting scheme in terrain unfit for planting.

“Why create an unnatural habitat when Nature has done so well to reclaim a tip site?  A typical response I am getting is, “Don’t plant a tree for me if you have to kill a deer in the process.” A cull will hurt a lot of people and do a lot of damage to the reputation of this city.”

Campaigner Suzanne Kelly is standing for election to the Council in the Torry/Ferryhill ward on May 3. The deer cull is an issue which has largely prompted her candidature. Kelly says,

“We have proof the cull was planned and deliberately kept from the public, as there is a letter from Scottish Natural Heritage of November 2010 advising on how to ‘manage’ the public over the cull. We should have been made aware of what the ‘tree for every citizen’ scheme meant for the future of this herd of deer and the existing eco-system of Tullos Hill.

“Many of us want to retain the hill as the meadowland it already is. In fact, meadows are the fastest-disappearing type of habitat in the UK. Furthermore, many of us, and experts, are convinced the trees will not grow. The previous attempt failed due largely to weeds and poor soil quality.

“The topsoil is scant, and a soil report says any trees will be vulnerable to destruction from wind. It should be enough for the city that thousands of citizens don’t want the trees if it means culling the deer and transforming the hill – but our opinions are nothing to the existing regime.”

Campaigners will attend a mock funeral for the deer which may have already been culled, or which will be culled, and will come dressed in black or suitable mourning dress.

The events planned for the day so far include

Lush Aberdeen is offering a gift to all protestors and will hold an in-store petition signing after the protest. A Lush spokesperson said,

“’We at Lush Aberdeen believe that there are more ethical alternatives to culling the deer on Tullos Hill. We are not against a tree-planting scheme in its own right, but we don’t want trees planted in our name if an entire eco-system, including both flora and fauna, is destroyed in the process.

“How is this for the betterment of anyone? We urge the Council to listen to its voting public and come up with a more responsible compromise that includes the entirely reasonable requests of its constituents.”

Supporters feel that to plant a single tree on Tullos Hill is to legitimise the culling of a hitherto-stable deer population for the next five to ten years and want to ensure that anyone who plans to help plant a tree on the day knows this.

A speech paraphrasing Mark Antony’s in Shakespeare’s Julius Caesar has been written as political satire and it will be read out by Kelly during the funeral.

A report prepared by Suzanne Kelly can be found at http://suzannekelly.yolasite.com/ – it contains many government documents concerning the evolution of the cull, how the public should be ‘managed’, and a soil report casting doubt on the viability of the scheme

Animal Concern Action Line has been opposing this scheme for over a year.  Further information from: