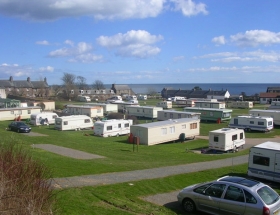 In the past fortnight a group of Travellers arrived in Stonehaven and were treated to inciting facebook comments (now taken down) and swastika graffiti.

Even the local business association sent an e-mail out, stating:

“We are particulary (sic) keen to hear if any businesses have experienced any problems such as shoplifting, abuse to staff etc. or if you feel your business has suffered in any other way due to the presence of the Travellers”.

I am sure these things never happen when the Travellers are not in town!

“But these people trespass, leave a mess, don’t pay tax and have brand new cars” I hear you cry – or possibly, “These are not the old Romany Gypsies” as one Councillor (who belongs to the party of the current Scottish Government) tastefully put it – as if the old Romany Gypsies did not get a load of abuse and hassle. Perhaps we should have on-site DNA testing – I wonder where that would lead?

Perhaps for balance the local press could put the other side of the story for a change.

According to Shelter ‘Scottish Gypsies/Travellers, have a long history in Scotland going back to the 12th century’. The Scottish Government’s Race Equality Statement (1) , published in December 2009, makes it clear  ‘that Gypsies/Travellers are a particularly discriminated against and marginalised group’.

Previously an article in the Daily Mail stated: ’Yesterday, Gypsy leaders met MSPs to call for new laws that would require local authorities to earmark land for sale to travelling families. However, last night Tory MSP Ted Brocklebank said the proposals should not result in taxpayers paying more to fund Gypsy traveller sites. He added:

“I don’t see why society should pay for or support them in that way. They should be treated with the same respect and abide by the same rules as other people.” (2)

Hmmm, some people might feel this way about MPs or MSPs!

Coming up to date, Gypsies/Travellers are not included in the current Census 2011 (no wonder there are no facilities for them).

Highlighting that international injustice does not just happen abroad:

“In one letter, to Aberdeenshire Council, Amnesty (International) highlighted its lack of a Gypsy and Traveller liason officer and its shortage of transit sites – where caravans can be parked for short periods. (3)

“A spokesperson for Aberdeenshire Council admitted it had only one permanent and no transit sites. ‘It’s something the council has been conscious of for sometime’. ” (3)

Ah, the crux of the matter. How long has Aberdeenshire council been conscious? (It is a question many of us ask ourselves). Perhaps between one and four decades?

The Secretary of State’s Advisory Committee ran from 1971 to 1999 formulating Scottish Office/Executive policy towards traditional travelling people and the committee’s focus was on site provision and encouraging local authorities to reach their ‘pitch targets’. (4)

Until Aberdeenshire Council takes its head out of the sand and provides proper sites for Travellers, as it is legally obliged to do, the police, politicians, journalists and community are hamstrung, whether travelling visitors are; Gypsies, Travellers, Romanies or rip-off tradesmen.

Anyone know a munificent land-owner?