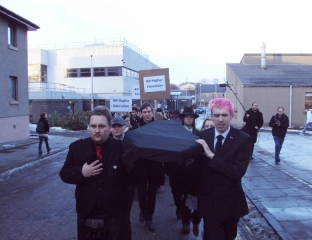 ‘The Funeral for Higher Education’ was organised by students at Aberdeen University last Friday. The action followed the vote in the House of Commons to raise tuition fees in England. The students marched through the University campus in silence, dressed in black. The Pallbearers carried a coffin draped in a black sheet. The procession continued on to the student association building where the protestors laid white flowers on the casket and listened to a short speech by student activist, Gordon Maloney, about the potential effects of the vote. 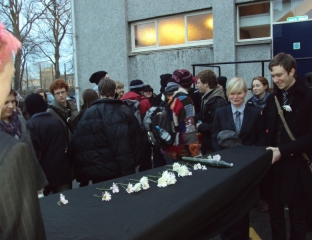 Mr. Maloney said “What happened on Thursday was far more than an increase in tuition fees. The cuts to the Further and Higher Education budgets don’t just mean a savage attack on social mobility, they represent a fundamental assault on the role Education plays in society. The fact that these changes do not mean any immediate increase in revenue also blow the argument that we need cuts now out of the water. This attack on Education – and, indeed, the entire welfare state – is ideological and it is unnecessary.”