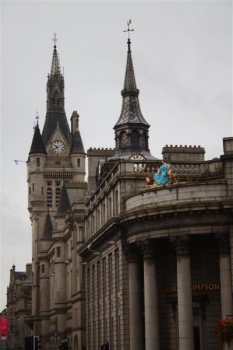 Well, here we are into the autumn of 2010. The general election is becoming a distant memory and the Scottish elections are homing into view. No doubt we will soon be getting bombarded with the usual plethora of promises as the political parties vie for our vote. It will be “we’ll give you this” and “we’ll give you that” and if “they give you this and that, we’ll give you this, that and something else that we’ll think of nearer the election”.

I am waiting for the ultimate political promise where one party will guarantee reincarnation after death, this being a particularly good one as there’s no way of proving otherwise.

The party manifesto that they spout out during the campaign is the thing that nobody reads – mainly because the parties have the nerve to charge us for it.  During the last election I asked the Labour and Tory candidates in Gordon for a manifesto and was told “I don’t carry them with me when I’m campaigning but, if you go into any party office in Aberdeen, they’ll sell you one”.  The problem is that all these promises can never be kept as there are so many of them in one document that it would take decades to fulfil them all.

I seem to remember in the nineteen eighties that all Aberdeen’s political parties were promising to make Aberdeen the greatest city in the world, the pavements were paved with gold, the oil was overflowing and The Dons were winning everything. If you fast forward to the last Scottish election, the political parties were promising to clean up Aberdeen, to wash the pavements, to make contingency plans after the oil runs out and the Dons were winning absolutely nothing. What went wrong? Answers on a postcard please.

a bus station where, in the winter, passengers have to stand in the blizzard to see if the bus is coming

My own guess is that the standard of politician in this country has plummeted and our towns and cities are no longer run by people with principles who genuinely want to make a difference. As Tony Benn so eloquently put it “We are no longer being governed, we are being managed”.

Today’s politician doesn’t speak to the people anymore, they consult with spivs and speculators and money people whose only interest in the city is where their next buck is coming from.

Aberdeen has many examples from the eighties onwards : the shopping malls , (put there by apparently blind planners) the fact that Union Street was never pedestrianised, and the assorted plans to cover areas all over the city. One plan after another brought to us by useless politicians who now use taxpayers’ time to exchange juvenile insults with each other.

The major building crime of the century as far as city planning goes is Union Square and the new bus station. Whoever gave the go ahead for that should be taken to the city boundary, pointed south and told to never ever come back.

It is the monstrosity of all monstrosities – a bus station where, in the winter, passengers have to stand in the blizzard to see if the bus is coming. Did the politicians do anything about that? No. Will they do anything about saving UTG?, No. Will they clean up the city and restore places like Johnson Gardens? No. However, will they promise you everything at the next election? Yes, yes and yes again, they will be falling over each other (and you) to give you leaflets. Lots of shiny new leaflets run off at your expense.

This is the time to say “NO, we will not put up with this anymore”. I urge the independently minded citizens of Aberdeen to stand at the forthcoming elections and vote out the useless bunch of chancers that occupy the Town House just now.