“POWER TO THE PEOPLE”, what does that mean? It was John Lennon who first brought it to my attention, although I am informed that in a 70’s sitcom the character Wolfie Smith was first to utter it. The reason I say this is that when Jimmy Reid died recently almost every article about Mr. Reid began with Lennon’s song. 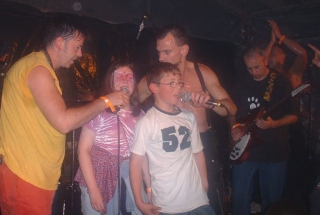 So! What does it mean? Do the people not already have power, the power to withdraw their labour or the power to remove politicians from their posts? However, even these powers are being eroded, the as the government’s anti trade union laws make it very difficult for people to exercise their fundamental human right of just downing tools. Recent High Court judgements testify to that and let’s not forget that the media run campaigns that make any trade union leader out to be the keeper of the Gates of Hell.

The Scottish Parliament is another place where the power of the people is being eroded; MSPs are elected to parliament under a list system which is meant to give people more choice. Nothing could be further from the truth; the list system is the biggest ongoing abuse of power in British politics as political parties make up the list. for example the Tory Murdo Fraser, who has been consistently rejected by the people in his constituency since he entered politics but still sits in the Scottish parliament. Why? Because he is top of the list and for every 5% of the vote you get an MSP.

There are more list MSPs in the North East than there are constituency ones. This is a scandal and an outrageous abuse of power. Providing that the list MSP does nothing to upset their party, then they could have a job for life and there is nothing the people can do about it. Alec Salmond could come last in next year’s vote in Gordon and still be elected to the parliament as he is always top of the SNP’s list. How many workers in Aberdeen and the Aberdeenshire can say they have a job for life? NONE! Except list MSPs.

Even the power of voting for or against something is being taken away from us; the recent Union Terrace Gardens poll is an example of another abuse of power, only this time it is “an abuse of wealth”. Where else in Britain would you find a case where the people have voted quite clearly against a specific issue, only to have that vote taken away because the people with the wealth did not like the vote? The silence from the politicians has been deafening and it is easy to see why as they are too busy building their own fortunes to be bothered with the people. When was the last time you saw your MP or MSP lead from the front? Never. Like the public leaders of today, they get others to fight for them and appear at the end claiming victory. Hypocrites to a person.

We can exercise our right to get rid of our politicians, but it has to be in such vast numbers that there is nothing they can do about it.

When Jimmy Reid and the other shop stewards took over the shipyards they did so with overwhelming support of the people. The slogan used was “Fight for the right to work”. They won a great victory. We, the people, can take inspiration from that and rid ourselves of the politicians at elections next year, but there needs to be thousands of us, the politicians want us to say nothing, to be sheep, to think like sheep and to follow blindly. This is our opportunity to say “NO”.

“Power to the People”