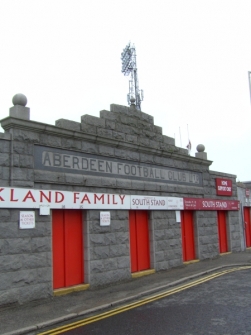 Sometimes nil-nil can be a deceptive scoreline, masking an exciting encounter between two evenly-matched sides. Sometimes, though, there are simply no goals because neither team is good enough to score any. This was a match almost completely devoid of incident, a scrappy bottom of the table snooze-fest from which neither team even deserved a point. Philip Sim reports from Easter Road.

The grim performance on the pitch induced a funereal atmosphere in the stands, as it slowly dawned on supporters of both sides that they’d just paid in excess of twenty pounds to be bored and depressed.

You could be forgiven for initially assuming that at this stage of the season, Aberdeen and Hibs are in false positions at the bottom of the SPL.

However on Sunday’s evidence the position is more than deserved – few teams in the league could conspire to serve up such dire, uninspiring fare.

At times the game was a comedy of errors – an Aberdeen player would walk the ball straight out of play, only for his Hibernian counterpart to send the throw-in straight back to a red shirt, inevitably ending in another aimless long-ball to no-one in particular. An actual football team could have run riot against either side.

The Dons lined up in a less than ambitious 4-5-1 formation. Really, such a formation should see a team dominate the midfield, but Aberdeen rarely managed to string three passes together in the middle of the park, let alone control it. Isaac Osbourne was effective as usual in spoiling opposition play, but Fraser Fyvie and Rob Milsom appeared completely incapable of retaining possession. Ricky Foster’s pace and drive down the left provided a few meagre highlights, but on the other flank Chris Clark put in an absolutely dreadful performance, with the Dons looking characteristically short on width or creativity.

The failings of the five were compounded by those of the one, with lone striker Scott Vernon looking increasingly isolated and starved of  service. In a functional 4-5-1 the midfield is supposed to push forward to support the striker, maybe turn into a 4-3-3 when attacking, but the Dons showed little offensive invention or ambition save the occasional foray forward from Fyvie.

Vernon is a penalty-box striker, not a target man. He is not the man to win flick-ons or hold the ball up for his team-mates – he’s a finisher, not a creator.

He prefers to play facing the goal, rather than with his back to it, so in short he could not be less suited to the lone striker role. This does not however explain why he spent two thirds of the game at Easter Road offside.

At the other end of the park, Hibs had more of the ball but offered few real threats, mostly being restricted to long-range efforts. Garry O’Connor conspired to make Youll Mawene look quick, and what the Hibs front line conjured up was easily dealt with by David Gonzalez.

The home side’s toothless attack is one of the reasons they’re bottom of the league, so really there was no need to move Kari Arnason back into defence. He strolled through the game as usual, and his composure and presence could have made a huge difference to the Dons midfield, which was relatively transparent throughout. Moving the Icelander to centre back meant shuffling Considine out to left-back, and with Rory McArdle in the other full-back position there was never a hope of any attacking ambition from the full-back position.

By contrast when Hibs came forward down the flanks they often outnumbered the visitors’ defence, because their full-backs were willing to overlap and leave their own half.

To be fair to Considine and McArdle, neither of them are full-backs, and neither can be blamed for their manager’s decision to play them there. Meanwhile, the players in the Aberdeen squad who have looked reasonably exciting in recent weeks – Josh Magennis and Peter Pawlett – were left on the bench, and only introduced after the game had settled into a coma.

Seven games of the season gone, then, and Aberdeen have still only scored in one of them. The complaints remain the same, of width, creativity and attacking ambition, while the excuses grow thinner by the game – the return to the bench of Yoann Folly heralds the last of the team’s injury worries, and the squad has had ample time to gel.

Other teams who have undergone similarly large rebuilding jobs over the summer have settled much more quickly – fourth placed Kilmarnock and SPL new boys Dunfermline for example. With former Plymouth striker Rory Fallon reportedly offered a contract, Brown obviously recognises the shortcomings of his side, but patience in the stands is beginning to run thin – the Dons need to start producing results soon.