Dave Macdermid tells Voice: One of Aberdeen Sports Village’s longest standing members has been presented with an outstanding achievement award. David Cheshire, a member since the Sports Village opened in 2009, was presented with his plaque by personal trainer, choreographer to the stars and face of the BBC’s Athens 2004 Olympic campaign, Steve Agyei. 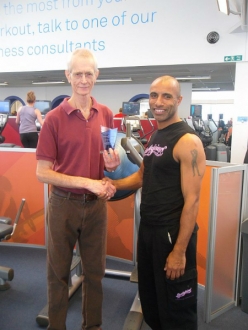 The award recognises all the hard work David has put in to achieve an incredible 1 million Fitlinxx points through use of the gym and exercise classes.
Unbelievably, this equates to over 150,000 minutes of cardio vascular exercise and lifting almost 10 million kilos, equivalent to lifting more than 1500 elephants!

Fitlinxx is a sophisticated fitness management system, which is directly linked to fitness equipment and is designed to guide users through workouts to maximise the gym experience. It adds an extraordinary intelligent dimension to workouts.

These events are open to anyone over 11, regardless of ability, and comprise two 3km runs and one 5km run along the beach prom in aid of Children 1st.

Steve will be attending the runs to motivate and advise runners before the race. He believes this is a great springboard for the summer running season and said, “With local events such as the Baker Hughes 10k and Run Balmoral coming up, it is a great way to help you prepare physically and mentally. Equally for those new to running, a 3k is a great introduction and an ideal target distance to aim for”.

The Fun Runs cost only £2 per race and applications forms are available at Aberdeen Sports Village website www.aberdeensportsvillage.com

For further information on the work of Children 1st: www.children1st.org.uk. 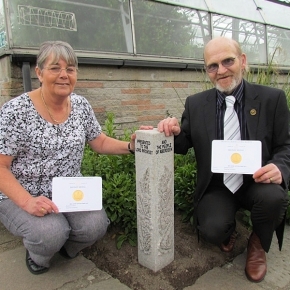 For a good many years I as an individual had entered into Aberdeen in Bloom and after 6 years of effort in 2011 our garden was awarded 1st prize.
However back in 2007 we were asked what we could do with our street.

To start with I suggested we could get some brackets on the lamp-posts and have two hanging baskets on each lamp-post, then as well as making our own planters we also looked into asking the council if we could have 4 planters as well.

Since 2007 we have added different things to our area and it was one of these improvements, at the entrance to our  our street,  after seeing an article for “Britain’s Best Flowerbed Photo Competition” in a Beautiful Scotland & the RHS News Letter, that we decided to enter into the competition.

At around this same time we were making improvements with floral displays to Bucksburn and also choosing a name and so: Bucksburn in Bloom was born.

Back to the photo competition, we decided to send in the photos of our flowerbed and the entry letter to go with it. We did not expect to win anything, and when you consider that the competition was across the whole of the UK and we are just a new group, you can imagine our surprise when a couple of months later we had been awarded 2nd Prize in our class.

There was more to come, as a result of the prize we were given a 7mtr x 4mtr flowerbed at the North of England’s largest show – The RHS Tatton Park Flower Show in 2009, similar to the Chelsea Flower Show in London .

Once the shock and surprise had eased off we set about designing the flowerbed with all the plants and landscaping. We submitted our design which was a floral oilrig, themed “Scotland’s Homecoming”. In July we packed up all the plants and accessories and we were off to Manchester to take part in our first RHS show.

We had three days to build the flowerbed and on the Wednesday it was judged. We were awarded an RHS Merit, the first they have ever given and we were very proud of it especially as we were up against 26 local council’s in the same category. On the Wednesday after judging the show was opened to 90,000 visitors until the Sunday. We were not just representing Bucksburn but Aberdeen and the North of Scotland and as such we were proud to be dressed in our national costume- the full kilt outfit. 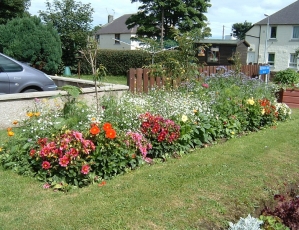 Another great surprise was when we were asked to come back next year in 2010. When asked what our theme would be, we decided that we were going to look into doing a flowerbed around the Highland Coo (cow) complete with its long horns.

Well, in 2010 our entry was accepted and in July  we collected “Gracie” – the coo from the Loch Katrine Centre & headed off to Tatton Park flower show.
We drove all through the night to get there for the Friday morning.

We had incorporated not just the coo, but a block of local Kemnay granite into our bed , which our Lord Provost Mr Peter Stephen had chosen the design of a thistle to be carved into its 4 sides.

Much to our delight and all our hard work this flowerbed was awarded an RHS Bronze Medal!

Sadly, we could not go this year (2011) due to my very bad health, but we have used this time to our advantage. The Tatton Park Show Manager phoned me to say that I had to get well for next year as Bucksburn in Bloom is part of the Tatton Park Family now and we have our place for 2012. We have designed our next flowerbed in the form of a flower canoe and paddles entitled “2012 Paddling to Success “.

If anyone would like to visit our web site you will see not only the first and second flower beds, but also our work around Bucksburn and  you will also see our design for the 2012 show when it goes onto the site in a few weeks time.

We bring all our plants back to Bucksburn & plant them around the area. The granite pillar used in the “coo” flowerbed was presented to the Lord Provost who accepted it on behalf of the people of Aberdeen. It has been placed in the floral courtyard at the Winter Gardens in Duthie Park for all to see.

We feel the floral work that we are doing is going some way in not only  helping the area look nicer but in hopefully bringing people together and I can think of no better way than community gardening. You are out in the fresh air, you are improving your environment and everyone young and old can always learn about gardening.

At 59 and with my years of gardening experience I am still learning all the time and it is good that as you grow older you can pass on your skills to the younger up and coming gardeners.

Our entries to the show are all paid for by sponsors and donations, which allows us to represent Bucksburn and Aberdeen at the RHS Tatton Park show. Our flowerbed and Bucksburn in Bloom were featured live on TV at the time on Gardeners World Live.

We always need sponsorship & donations to help us represent the area. Anyone wishing to make a donation or sponsor our flowerbed entries or even wishing to become a volunteer or just wanting to look us up on our web site,  the details are as follows:
http://www.bucksburninbloom.btck.co.uk

On a final note; one of next biggest projects and working alongside Bucksburn and Newhills Community Council is to try and turn an old school playing field into Scotland’s and Aberdeen’s first solar powered, totally green Community Park for the people & visitors to Bucksburn.  We will be needing volunteers to help with the project for the 5 years it will take to build it.

Whether you are young or old always enjoy your gardening.