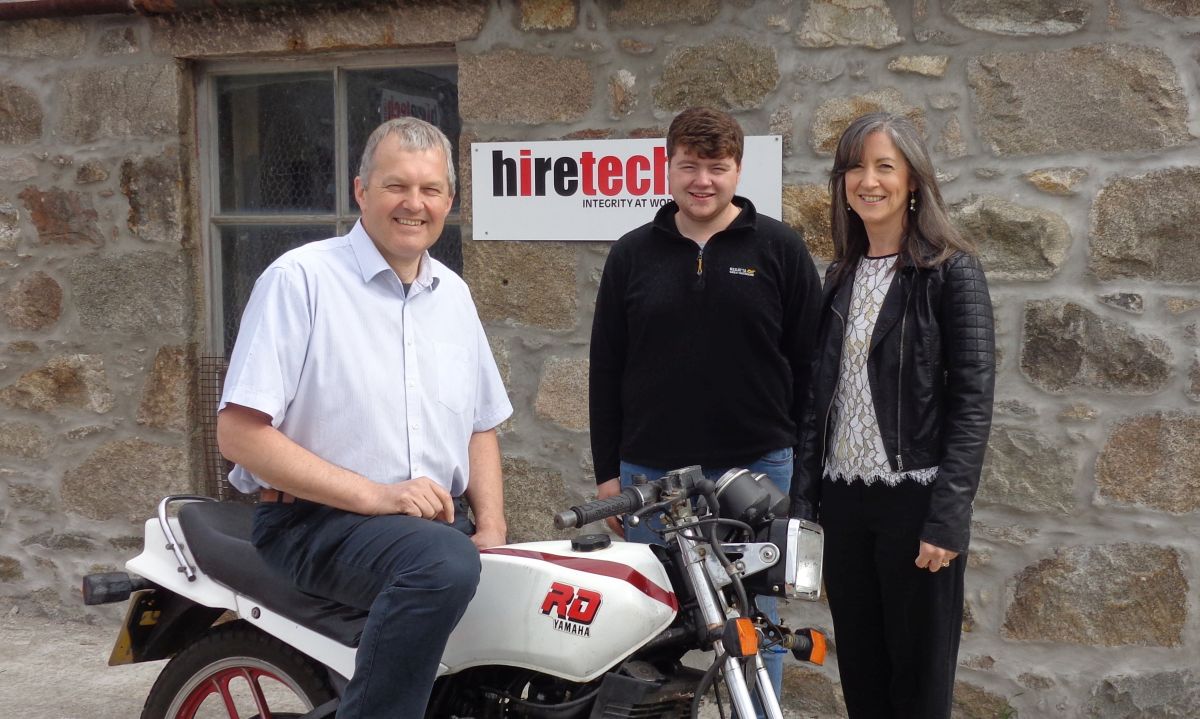 Andy Buchan and James Farquhar of Hiretech with Michelle Ferguson from Cash for Kids.

The big-hearted businessman used the occasion of his 50th birthday to raise money for the local children’s charity, requesting donations in lieu of presents.

A subsequent fundraising motorcycle ride with friends and colleagues to the west coast helped to swell the final total.

Eight fellow bikers joined Andy on the return trip from Hiretech’s office at Hatton of Fintray to Applecross, with the route also taking in Ullapool and the Bealach na Ba. On the 450-mile journey the bikers received light-hearted fines for any misdemeanours and breakdowns. Andy stipulated that all bikes should be pre-1979 models, a rule he himself broke – and was fined for – by choosing to ride a 1986 Yamaha RD125LC.

The group was supported on the trip by Hiretech apprentice engineer James Farquhar. His services were put to use within minutes of the journey commencing when one of the bikes broke down around two miles outside Hatton of Fintray.

A keen motorcyclist, Andy has supported many charitable causes in recent years and was inspired to support Cash for Kids due to its local nature, with all funds being raised and distributed in the north-east. Andy first became aware of Cash for Kids 20 years ago when he played the guitar in a friend’s punk band at an event that raised money for the children’s charity.

Cash for Kids will use the donation to help fulfil applications to its unique quarterly grant funding programme. The scheme provides grants to individuals, families and community groups to support children and improve their quality of life. Applications need to be endorsed by a third party, such as a social worker or health visitor, and the deadline for applications in the current quarter is Wednesday, 19 July.

“We are very grateful to Andy and his family, friends and colleagues for their generosity. The bike trip sounds like it was an eventful journey from the outset and illustrates how fun and imaginative fundraising can be.

“Andy’s efforts will enable Cash for Kids to continue to support a wide range of children, families and community groups in Aberdeen and Aberdeenshire.  Our aim is to improve the life quality of these children, whether that is a result of disability, illness or poverty.”

“Cash for Kids makes a positive impact on the lives of thousands of children and their families in the north-east every year. The funding it provides can be invaluable. I am very thankful to everyone who has helped me to fundraise for the charity over the past month, particularly those who were penalised for their unknown misdemeanours on our bike ride.”

To help fulfil future applications to its grant funding programme, Cash for Kids is running a major appeal throughout 2017. It is encouraging 500 people in Aberdeen and Aberdeenshire to sign up to its 500 Faces campaign and commit to each raising £100 before the end of December 2017. Further information is available at www.northsound1.com/faces.

Cash for Kids is an Aberdeen-based charity that works to improve the lives of sick, disabled and disadvantaged children and young people under 18 living in north-east Scotland. The community-focused organisation is Northsound Radio’s listeners’ charity. Along with running a number of campaigns throughout the year, including its annual Mission Christmas children’s gift appeal, Cash for Kids operates a unique quarterly grant giving programme.

Grants are made to individuals, families, children’s groups, organisations and projects throughout the Northsound transmission area. All of the money that is distributed to these local families and projects has been raised locally.

More information on Cash for Kids can be found at www.northsound1.com/cashforkids or telephone 01224 337010.