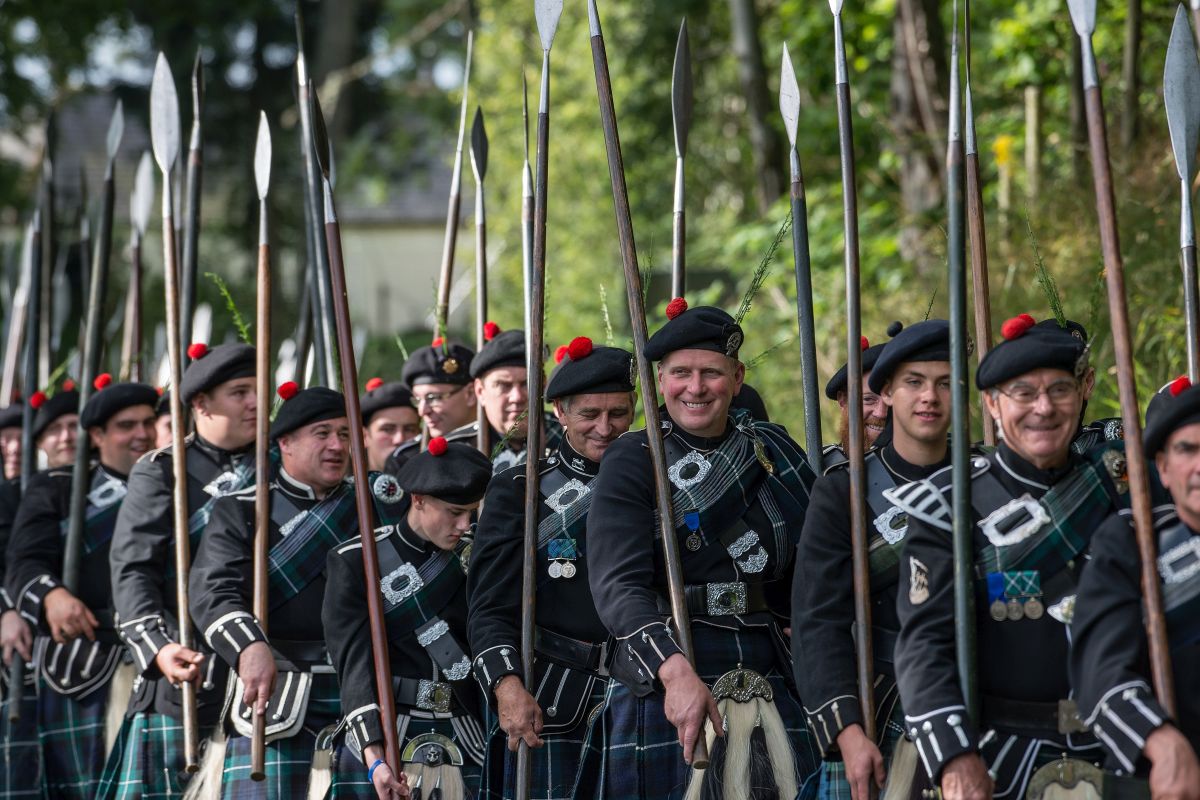 Aberdeenshire’s Lonach Highlanders are set to make a mark as they debut at this year’s Royal Edinburgh Military Tattoo.

Seventy-five of Strathdon’s kilted clansmen will travel to the capital in August to be part of the iconic annual spectacle as it celebrates Scotland’s clans.

The men have been invited to be part of the performance on Monday, 14 August by Lord Forbes, chief of the Forbes clan.

In front of an audience of around 8,500 people, including many international visitors, the highlanders will parade onto Edinburgh Castle’s Esplanade to herald the start of the evening’s performance. Dressed in full highland regalia and armed with their traditional eight-foot long pikes, the men will create an imposing sight for the gathered crowd.

With a history stretching back to 1823 when the Lonach Highland and Friendly Society was formed, the Lonach Highlanders are believed to be the largest body of non-military men to carry ceremonial weapons in Britain. Membership is drawn from residents of the local area who descend from the Forbes, Wallace and Gordon clans. Society membership currently stands at 227 men, under the patronage of Sir James Forbes, 8th Baronet of Newe and Edinglassie.

The theme of this year’s Tattoo is a Splash of Tartan, something that the Lonach Highlanders will admirably provide. To mark Scotland’s Year of History, Heritage and Archaeology, Tattoo organisers have teamed up with The Standing Council of Scottish Chiefs to celebrate the country’s clan heritage and national fabric, and their influence around the world.

Two or three clans will be represented at each performance during the Tattoo’s three-week run. On the night of the Lonach Highlander’s attendance, both the Forbes and Wallace clans will muster on the castle esplanade and their Scottish ancestry celebrated.

The highlanders’ trip to Edinburgh comes just 12 days before their own annual gathering takes place in Bellabeg, Aberdeenshire.

Attracting crowds of up to 10,000 people, the Lonach Highland Gathering and Games is one of north-east Scotland’s leading traditional highland games.

This year’s event on Saturday, 26 August marks the 176th time the gathering has been held. It will once again commence with the Lonach Highlanders embarking on six-mile march round the local area, following in the footsteps of their forefathers and continuing a near two-hundred year-old tradition.

“The Lonach Highland and Friendly Society is honoured to have been invited to participate in this year’s Royal Edinburgh Military Tattoo. This is the first time that the Lonach Highlanders have been present at the event and there is huge excitement amongst those taking part.

“This is a fantastic opportunity for the society and the highlanders to help promote our history and heritage, the Lonach Gathering, Aberdeenshire and highland games in general. Television recording will be taking place on the night that we are parading. If we make the director’s cut then there is potential for millions of people around the world to learn about Lonach.

“Attending the Tattoo will be a great warm up for the 176th Lonach Highland Gathering and Games just 12 days later on Saturday, 26 August. If you think the sight of 75 Lonach Highlanders marching is special, the sight and sound of 200 of them, pikes aloft, marching through picturesque Strathdon is one to behold, and not to be missed.”

Ringside seat tickets for the 176th Lonach Highland Gathering and Games are on sale now, priced from £12 for adults and £7 for children. Visit www.lonach.org for full details.

Established in 1823, by Sir Charles Forbes, 1st Baronet of Newe and Edinglassie, the Lonach Highland and Friendly Society is a charitable organisation based in Strathdon, Aberdeenshire. The society organises the annual Lonach Gathering at Bellabeg Park, Strathdon, which is held on the fourth Saturday of August.