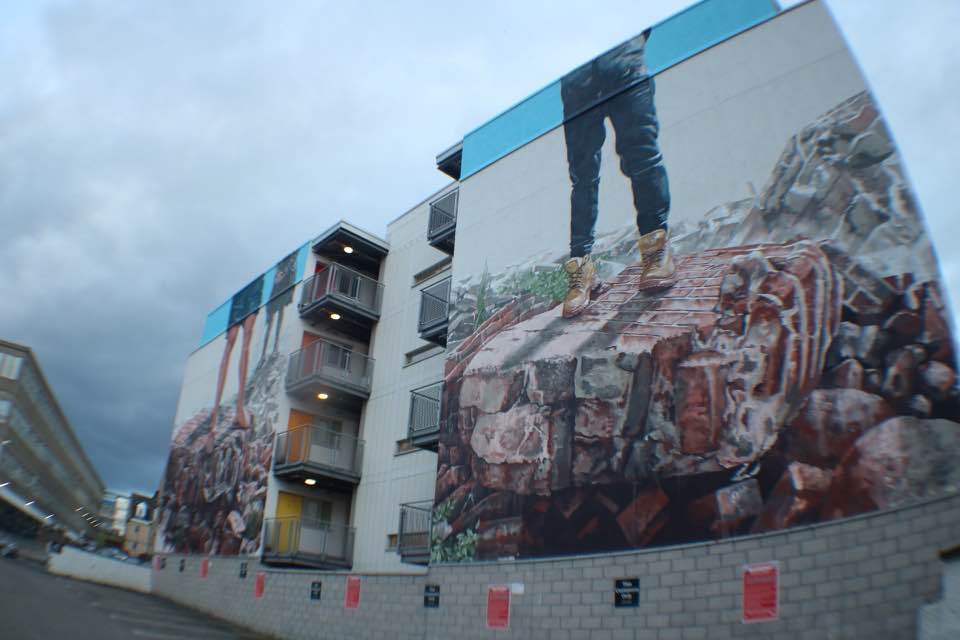 “Beneath the paving stones, the beach.” That was the apothegm of Nuart Aberdeen. I would add: “Above the rubble, art.”

I must admit, the level of success that Nuart Aberdeen has achieved is beyond my expectations.

I knew that this innovative project, I nearly used the word ‘happening’, because that is what it was, was going to be interesting and popular, particularly amongst people who like art and culture, but it captured the imagination of so many others also.

Before the international artists arrived, not many people I spoke to was aware of it. But as soon as the Herakut painting of their six year old daughter on the New Market wall in The Green was underway, the interest of the citizens of the city was well and truly piqued.

As each new work was underway or completed, it was virtually all that the conversations was about.

The magnitude of some of the works quite surprised some people: such a thing has never happened in Aberdeen before. But equally pleasing was the reaction to the smaller scale pieces too.

Norwegian artist, Nipper’s Mission Directive, Make, Take and Replace installations were popular (where he left made items on clipboards in various locations, e.g. The Shiprow, Trinity  Quay and Harriet Street to name but three, and these things were free for people to take and keep. Then local artists could leave a sample of their work, to be taken too), and so successful, that I personally only saw a work left on one place as I drove by, and by the time I got parked and went back there, it had gone.

Local artists, however were leaving samples of their work at various locations on the trail.

These clipboards are still in situ with the hope that this sharing of work will continue.

The school children I mentioned in a previous article helped paste up their contribution to Julien de Casabianca’s Outgoings project in Queen Street and Shiprow, and in the future, they will pasting more works up in their local areas, thus creating a bit of a legacy.

Julien himself said, in a very interesting and comical talk he gave in the Anatomy Rooms, that he is looking forward to returning next year – as did other artists, particularly on their social media pages.

The event, which was more than just painting, stencils, and sculptures etc, included films and discussions in the Belmont cinema, live music in Drummonds and a fight club debate in Underdog. There were also free pavement chalk painting and street printing workshops too.

Proving exceedingly popular was the street walking art trail tour. Around 300 turned up for the Saturday afternoon one, meaning that it had to be split up into two seperate groups with more than one guide per group.

On the last evening of the event, the members and artists from NUART ABERDEEN spent a very enjoyable time having a game of bowling down at Codonas.

It seems inevitable that the event will return next year, James Finucane, told me,

“The people embraced the art and the artists wholeheartedly. The turnout for the street art tours was phenomenal and it was great to see so many people exploring the city on their own as well, looking for all the works.

“We look forward to developing plans for Nuart Aberdeen 2018 with our partners in the near future.”

Meanwhile his task continues as he goes ahead with the organising of Nuart in it’s home city of Stavanger as it enters it’s 17th year. This year it runs from 31st August until 15th October.