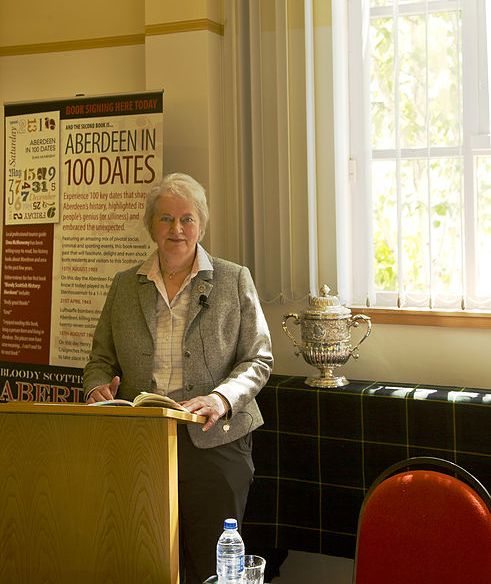 Aberdeen’s Gordon Highlander Museum was the setting for the launch of Mearns author Elma McMenemy’s new book ‘Aberdeen in 100 Dates’.

A professional Blue Badge Tourist Guide, Elma has more than 30 years experience of working with Scotland’s visitors and has built up a vast repertoire of tales showcasing the rich and varied history of both Aberdeen City and the hinterland of the North east.

Her previous book focussed on the often macabre and bloody history of Aberdeen and in this new collection of local tales Elma leads the reader on a journey through 100 of the key dates which have shaped the development of the city.

Aimed, as Elma explains, at “people who would not normally open a history book” the publication has already proved popular especially with fellow tour guides who plan to use it as a research tool when preparing guided tours around Aberdeen and the North east.

“Its easy to talk to a coach full of tourists” she says,

“but putting words down on paper is quite another thing. Aberdeen is such a brilliant and helpful place. No-one I have asked has so far refused to help me in my research!”

The book presents as a sound-bite tour-de-force of popular folk and historical tales. With one story per page and illustrated throughout with line drawings, there’s plenty to interest even the most informed reader and visitors unfamiliar with the North east will undoubtedly be tempted to delve deeper into many of the stories highlighted within the 124pp.

Dedicated to a godson “who loved all sort of trivia”, the 100 dates kick off with an examination of the arrival in Aberdeen of Christianity courtesy of St Machar, a 6th century disciple of St Columba. Given that each tale is restricted in length to approximately 230 words, the author manages to pack in a good amount of information and leads the reader quickly from St Machar’s arrival on Iona on to the miraculous tale of St Machar’s Well and the eventual founding of Aberdeen’s St Machar’s Cathedral.

On June 5th 1815 we learn that a large mob “not falling short of half a thousand, attacked the White Ship, a house of ill repute run by Meggie Dickie”. The military were seemingly summoned to arrest the ringleaders one of whom was transported for seven years. Resurrectionists feature in the story of another Aberdeen riot, this time dated 19th December 1831.

Seemingly a mob burned down the local anatomy theatre after discarded human remains were found nearby. Who said Aberdeen was a boring city?

Bloody Harlaw, the founding of Aberdeen Golf Club, the epic tale of the Scottish Samurai and the Royal connections of William McCombie and his prize Aberdeen Angus Bull, Jeremy Eric, feature alongside the “crushing defeat of Rangers in the 1982 Scottish Cup” and the tragic gas explosion which, in 1983, destroyed the Royal Darroch Hotel in Cults. 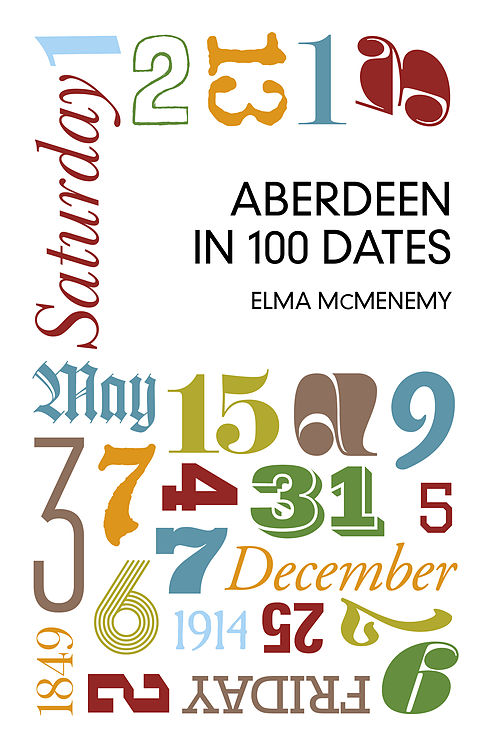 The two concluding stories are bang up to date and describe the charity auction of Aberdeen’s Dolphin Sculptures and the 2016 discovery of 92 bodies buried beneath Aberdeen Art Gallery. Art critics perhaps?

In short, from quirky to gruesome, there’s plenty here to interest everyone.

Inevitably in a work of this complexity there are debatable issues. Fitting 100 tales onto 124 pages is no mean feat. The Aberdeen typhoid description is a case in point and includes the oft repeated line that there were no deaths.

However given that most local histories mirror this notion, the contention is perhaps forgivable and the three folk who died as a result the epidemic will no doubt forgive the repetition.

A slight criticism is however due, regarding the lack of chapter headings or even an index. Apart from the chronology of year, month and date there is little to inform the reader regarding the content of each section and although Elma’s general introduction clearly sets out the parameters of the book’s historical context, the lack of a formal navigation structure restricts the reader to a dipping in and out approach.

First published in the Summer 2016 edition of Leopard Magazine.