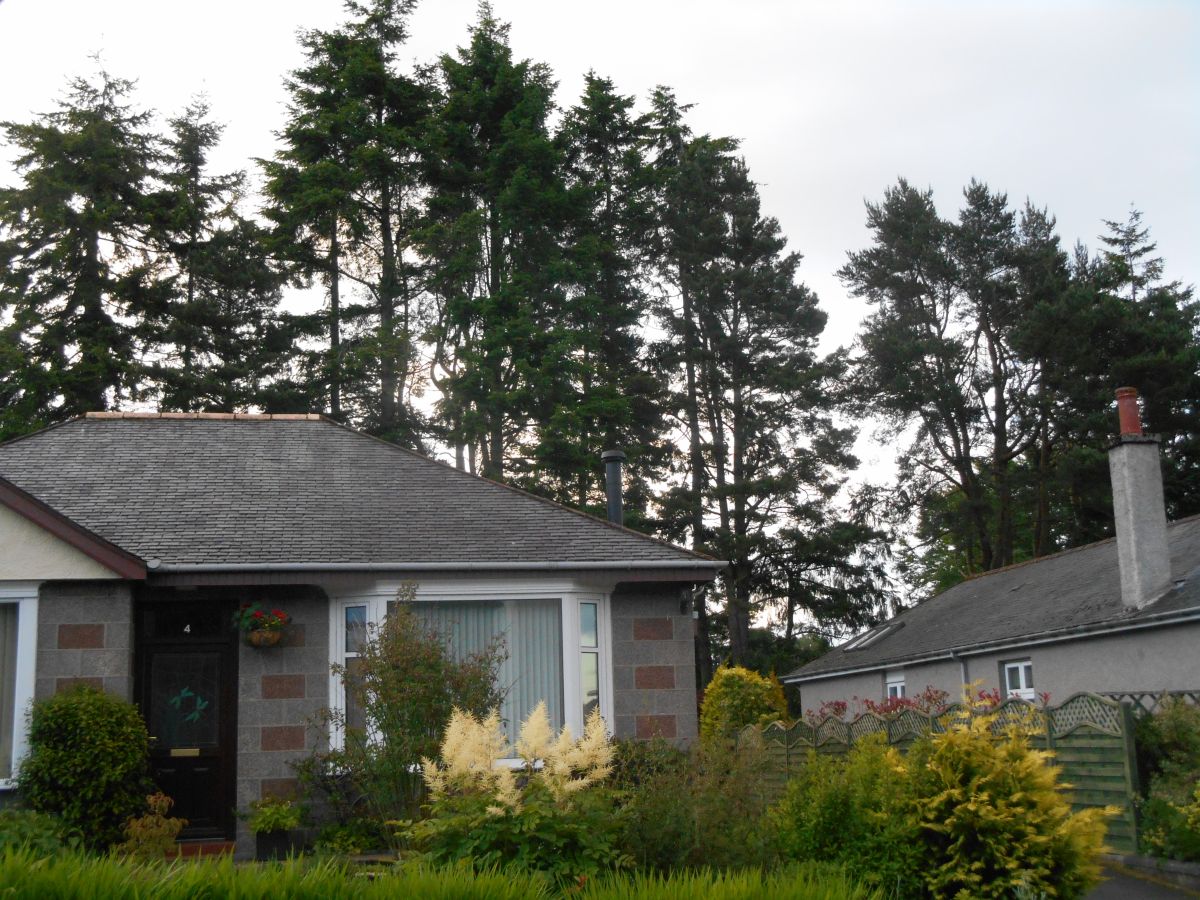 A whole belt of healthy well-established trees is being cut down in Peterculter. This work was planned for August, but is happening today, now.

It has been very difficult to get any answers from the council: they told me this morning that some residents have complained of falling branches.

But surely this doesn’t necessitate the destruction of the whole belt.

I only moved to the area late last year. The main reason we bought the house was because of the beautiful majestic backdrop of mature pines.

Back in March, fifty-two local residents received a letter from Alasdair Wilson at the council, saying they were considering taking the trees down. It offered options either to remove them, remove some of them, or to leave them. I responded, stating that I would prefer it if the trees were left alone, because they enrich the area, support wildlife and also provide a windbreak for the houses.

I received no acknowledgement. I emailed again to check if my response had been received. Again, I received no answer. I tried phoning Mr Wilson, using a number I was given from the main Council office, but no answer. I tried half a dozen more times, then tried the Council again. They gave me the same number again and said they would contact Mr Wilson and tell him I was trying to reach him. Again, nothing.

Then on the 31st of May we got a second letter saying there had been only thirteen responses, with seven in favour of retaining the trees, a slight majority, and that they would be felling them all, with work starting mid- to end August. I emailed back, also contacting the local community council, and three local councillors, asking them to reconsider.

Then on Monday morning out of the blue we awoke to the sound of chainsaws. At this point I had not been given any reason whatsoever for the trees being felled. I then received a short email from Mr Wilson, saying:

“It is assumed that the silent majority have no strong opinion and are happy for us to continue.”

He gave his mobile number, so I was able to contact him at last and express my dismay. He said they had time to do the job just now, so were going ahead.

He said that in the past some properties had been damaged by falling branches. I asked him if the trees could just be monitored and maintained and he told me it was too late because the trees had not been properly maintained previously. He told me the number I had been given twice by Council staff was obsolete and just reaches an empty office. 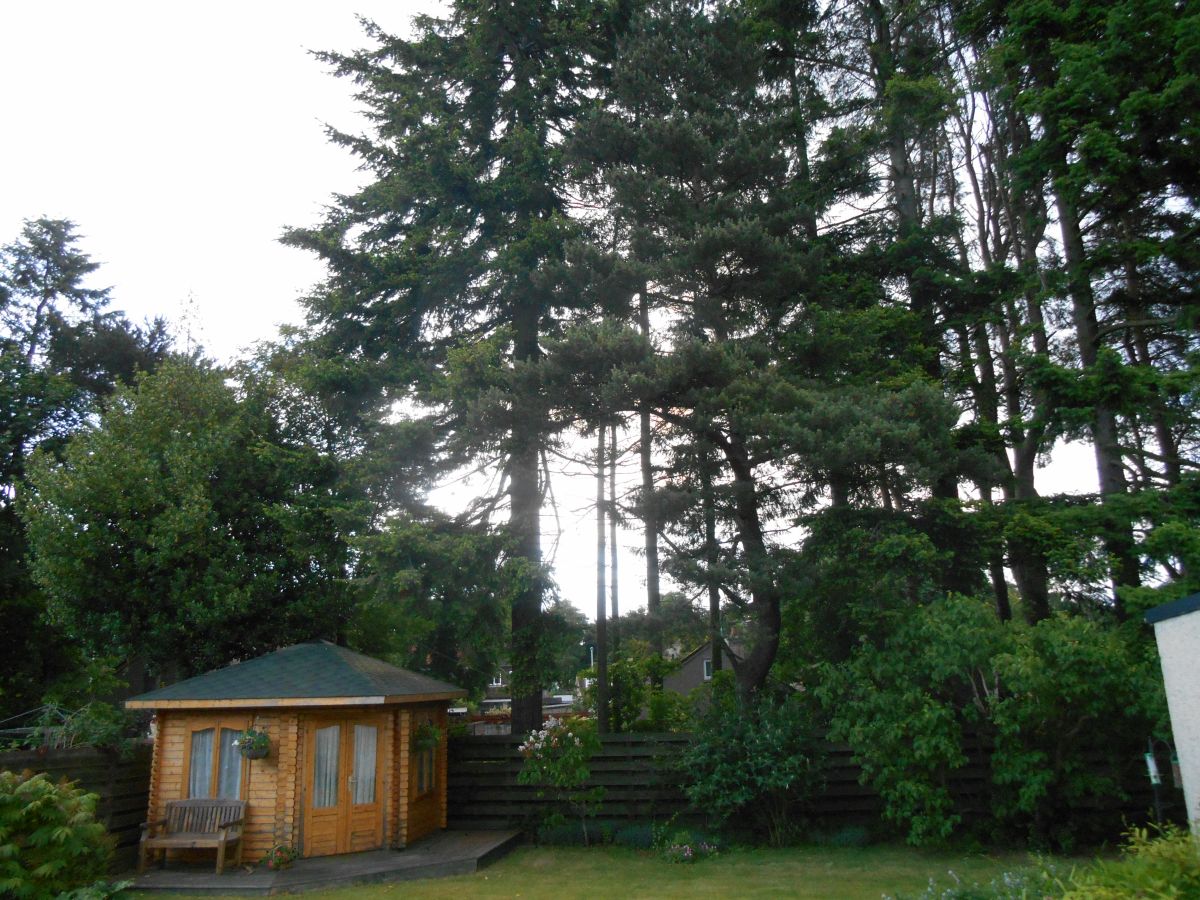 I contacted the RSPB, who said they recommend felling after mid- to end August, as originally planned, to avoid disturbing nests.

I then heard back from Councillor Marie Boulton, who said that some residents in the retirement houses on the other side of the tree belt felt their houses were dark and damp, and that they felt threatened when returning home at night. More street lighting had been put in, but according to Councillor Boulton they still felt threatened, and felt ‘unsafe’ sitting out in the communal areas.

There are twelve of these houses for elderly people, so even if all six responses in favour of felling came from those houses, then that is still only half of them. The trees are at the bottom of a slope, so the roots probably absorb huge amounts of water. It is therefore possible the houses may become damper with the trees gone. Also, there are other communal areas away from the trees for people to sit outside.

Apart from my own view that the trees should stay, I believe the Council has handled the situation extremely badly, by not supplying information or explaining or justifying what they were doing; in fact, by not answering queries at all until after the felling had begun. It also seems pointless asking residents for their opinion if they then go ahead and do whatever they want.

The council has told me that any trees with nests will be left temporarily, but I believe the noise and destruction of adjoining trees will cause birds to abandon their nests.

There was a local ‘consultation’ with most responses being in favour of keeping the trees, but the council have gone ahead anyway. There are few enough trees in the city as it is. With the construction of the bypass, and all the house building locally, we need to be protecting trees, not destroying even more.

There are plans to replant the area, which is at least some consolation (to future generations anyway).

9 Responses to “Council Pushes Ahead With Peterculter Tree Felling”