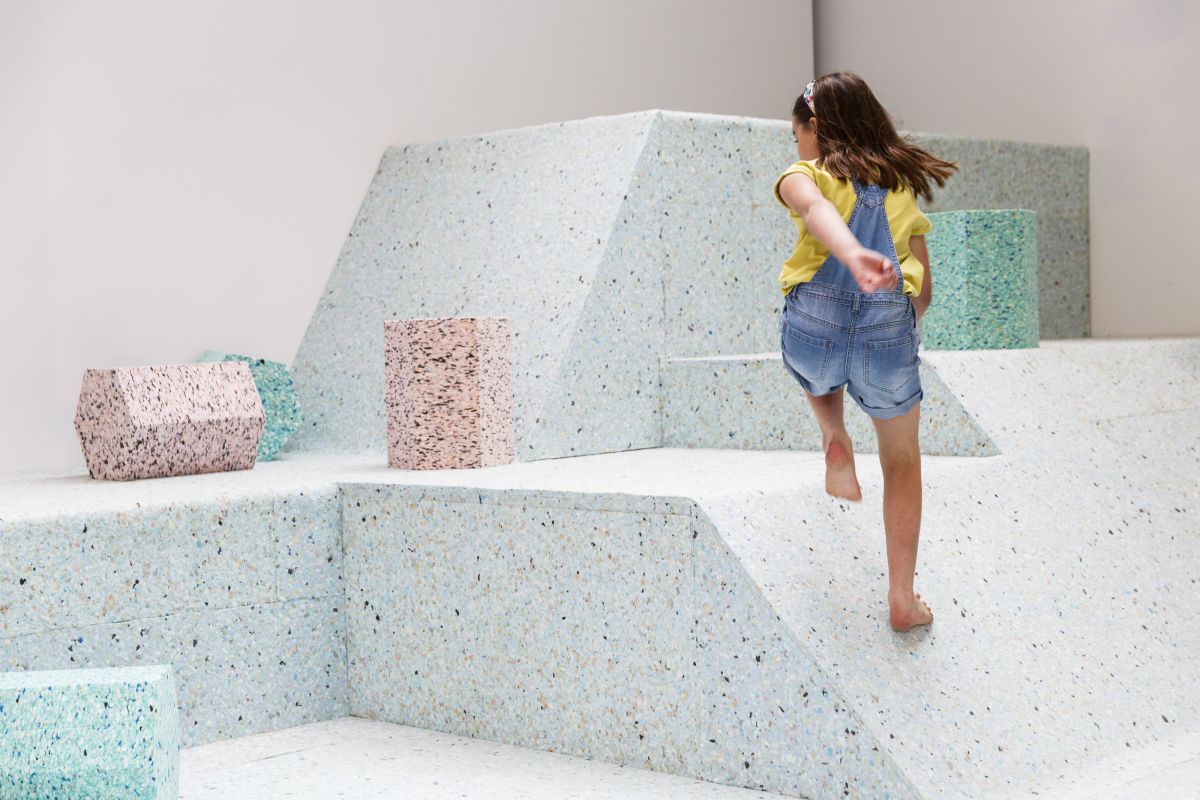 Brutalism was an architectural movement of the 1950s-70s, which aligned with a new socialist agenda.

Buildings were fortress-like in form, often of grand monolithic scale and designed to bring function to the flow of people populating them.

As such, Brutalism was predominately found in municipal buildings, educational institutions, shopping centres and high-rise housing. It is from the high-rise housing schemes and their surrounding social spaces and playgrounds that The Brutalist Playground takes its inspiration.

By recreating the post-war playground structures in soft pastel coloured foam The Brutalist Playground is an immersive and climbable installation – fun for all ages!

The Brutalist Playground is the centrepiece of Aberdeen’s Look Again Festival 2016, which celebrates bringing the very best in visual art and design to the city.

Assemble is a collective based in London which works across the fields of art, architecture and design. Its 18 members began working together in 2010. Assemble seeks to address the typical disconnection between public and the process by which public places are made championing a working practice that is interdependent and collaborative, seeking to involve the public as both participant and collaborator in the on-going realisation of the work.

Simon Terrill is an Australian artist living in London who works with photography, performance, sculpture, and installation as well as large-scale public works involving many hundreds of participants. He began working with Splinters Theatre in Canberra and went on to co-found Snuff Puppets Inc, a travelling performance troupe.

Following a BA in Sculpture and MA in Fine Art at the Victorian College of the Arts in Melbourne, he lectured in Critical and Historical Studies (2005-08) and at the Centre for Ideas (2003-08), both at the VCA. In 2008, Terrill was awarded the Samstag International Visual Arts Scholarship that enabled him to spend a year at the Slade in London. Recent exhibitions include Tilt, Sutton Gallery Melbourne, The Piranesi Effect, Ian Potter Museum of Art, Balfron Project II, 2 Willow Road, National Trust Ernő Goldfinger Museum.

Upcoming is the Creative Connections commission at the National Portrait Gallery that will feature the ninth iteration of his on-going Crowd Theory project, a series of photographic performance works which have previously featured sites including Balfron Tower (2010), the Port of Melbourne (2008), and Adelaide’s Victoria Square /Tarntanyangga (2013).

He is represented by Sutton Gallery, Melbourne and The Fine Art Society Contemporary, London, and currently lectures in photography theory at London South Bank University. In 2012, the publisher M.33 produced a monograph of his work titled Proscenium.