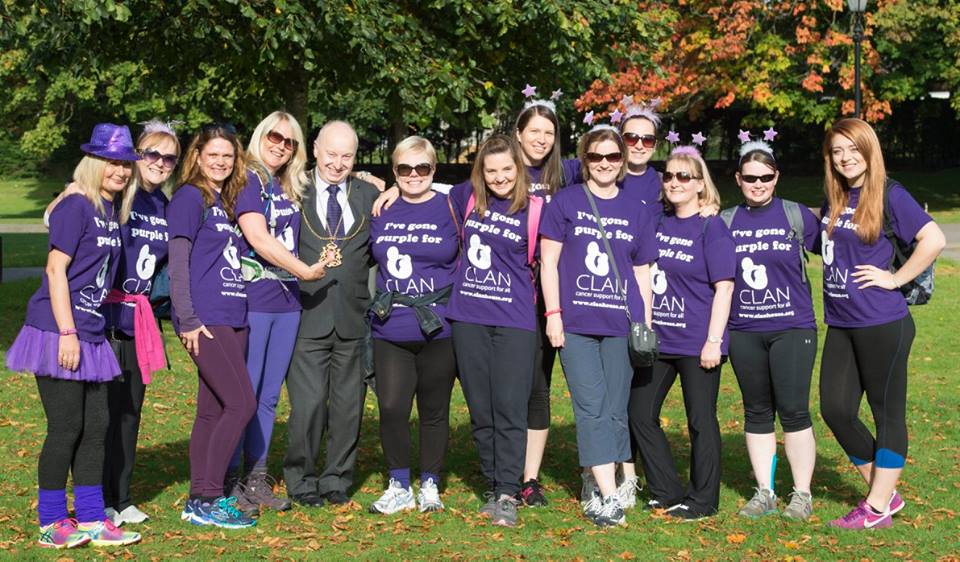 Aberdeen was a sea of purple as hundreds of walkers put their best foot forward in support of a leading north-east cancer charity.
More than 500 people took part in CLAN Cancer Support’s Landmark Walk on Sunday, September 27, tackling one of two routes of 13 miles and 7.8 miles, to take in a number of prominent landmarks throughout Aberdeen.

The event was officially started by Lord Provost councillor George Adam as participants set off in their droves from the city’s Westburn Park to tackle the trail.

Now in its third year, the event was again generously supported by commercial law firm Bond Dickinson as walkers took in a number of the Granite City’s most famous sites including King’s College, St Machar Cathedral and Pittodrie.

The charity also called on the help of more than 300 volunteers who provided vital support both before and after the fundraiser as well as marshalling the route itself.

With sponsorships and donations still arriving, the event is on course to match last year’s eventual total of £50,000 which will go towards the charity’s provision of free support services to anyone affected by cancer across the north-east of Scotland, Moray, Orkney and Shetland.

“This is our third Landmark Walk event and it’s always quite something to see the sea of purple leave Westburn Park to tackle the routes in support of CLAN.

“From the walkers to the volunteers to the supporters on the streets, each and every one of you has helped make a difference to those affected by cancer in the north and north-east of Scotland and for that we simply cannot thank you enough.

“The donations are still flooding in so we’re still a bit away from knowing a grand total at this stage but we’re definitely on course to raise £50,000 which is a truly fantastic total and testament to the hard work and dedication shown by all those involved.”

Based in Aberdeen, the charity covers the whole of north-east Scotland, Moray, Orkney and Shetland. CLAN has a presence in Ballater, Banchory, Elgin, Inverurie, Fraserburgh, Peterhead, Stonehaven, Kirkwall and Lerwick.