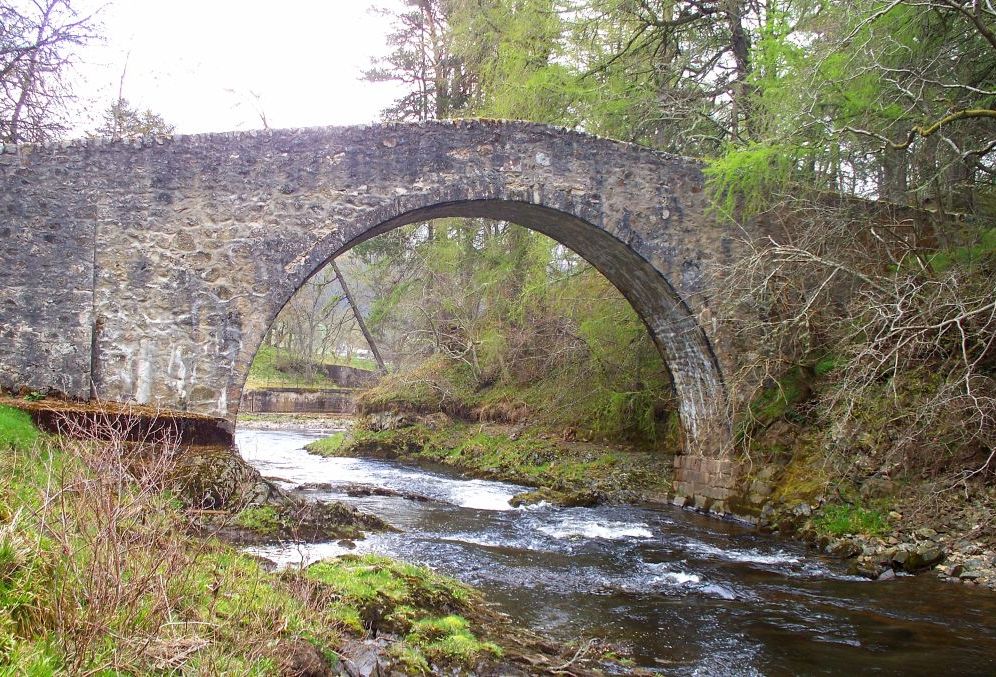 With thanks to Ian McLaren, Innes Associates.

An Aberdeenshire community has come together to mark the 300th anniversary of a local landmark as it prepares for its biggest day of the year.
Members of the Lonach Highlanders joined schoolchildren and residents of Strathdon yesterday to celebrate the tercentenary of Poldullie Bridge in Strathdon.

Built in 1715 by John Forbes of Inverernan and spanning the River Don, the bridge significantly improved safety and communications in the area when it opened.

The celebrations, organised by Strathdon Primary School (whose logo features the bridge), took place two days ahead of the annual Lonach Highland Gathering and Games. A commemorative cast-iron plaque has been unveiled on the bridge to mark the milestone.

Assisted by pupils from the school, the plaque was unveiled by Sir James Forbes of Newe, patron of the Lonach Highland and Friendly Society. Members of Lonach Pipe Band joined the highlanders on the march, with the highlanders being supported by their new horse, Socks, who will make his official debut at Saturday’s gathering.

Poldullie Bridge is one of the best surviving examples of an 18th century single semi-circular arch stone bridge. Unlike many of its neighbours, the bridge survived the catastrophic flooding of August 1829, known as the Muckle Spate. The bridge is maintained by Aberdeenshire Council and the local authority area has the highest number of listed bridges in Scotland.

The man behind Poldullie, John Forbes, also known as ‘Black Jock’, was the bailie of Kildrummy and a close associate of John Erskine, the Earl of Mar. Erskine led the Jacobites against the British Government forces at Sherriffmuir in November 1715, having planned the campaign at Kildrummy Castle and raised the Jacobite standard at Braemar Castle.

Pupils at Strathdon Primary School have been learning about the construction of different types of bridge, as well as the history of the local area and Poldullie Bridge itself. They will be showcasing their work at an open-day event at the school on the same day.

Saturday sees the 174th Lonach Highland Gathering and Games take place in nearby Bellabeg, with events getting underway from noon. Organised by the Lonach Highland and Friendly Society, the annual event attracts up to 10,000 visitors, including many from overseas. This year’s event will also commemorate the 300th anniversaries the Poldullie Bridge and the Jacobite uprising, with a number of Jacobean reenactors attending.

“We feel very privileged to be able to commemorate the construction of a local bridge which has provided a route for travellers and local people for the past three hundred years.”

“Poldullie Bridge is an elegant local landmark. Its importance as a transport route may have been bypassed by more modern roads and bridges, but its historic contribution to the local area shouldn’t be overlooked.

“The Lonach Highland and Friendly Society is honoured to have been asked to be involved in today’s ceremony and thanks must go to Strathdon School and its pupils for their research and organisation. It is wonderful to see such enthusiasm in the local community to mark this milestone.

“Along with enjoying the packed programme at Saturday’s gathering, we are encouraging visitors to explore the local area, and pay a visit to our local landmarks, including Poldullie Bridge, the Doune of Invernochty and the Lost sign.”

“The north-east played a significant role in the 1715 Jacobite Rebellion.  The Earl of Mar, who led the uprising, called on men from Donside to support the Stuart cause.

“That Poldullie Bridge is still standing strong, weathering tumultuous times better than its architect, is certainly something that should be celebrated.

“What’s more, the Lonach Highland and Friendly Society was founded during the difficult post-Culloden years, on a will to preserve the memory of the past but embrace the future.  It’s very fitting that the Lonach men should be involved in the commemorative celebrations.”

Organisers of the gathering are encouraging visitors to explore the local area and visit some of its attractions and landmarks, including Poldullie Bridge. They have also unveiled the ideal selfie spot in Bellabeg for the weekend – beside the iconic road sign that points to Lost.

Established in 1823, by Sir Charles Forbes, 1st Baronet of Newe and Edinglassie, the Lonach Highland and Friendly Society is a charitable organisation based in Strathdon, Aberdeenshire. The society organises the annual Lonach Gathering at Bellabeg Park, Strathdon, which is held on the fourth Saturday of August – this year’s event takes place on Saturday, 22 August.  The main attraction at the gathering is the march of the Lonach Highlanders, a unique body of non-military men.